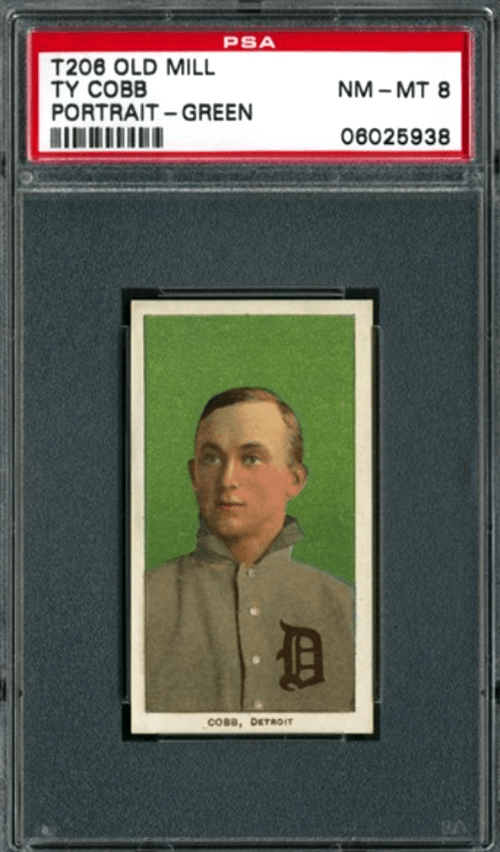 The T206 tobacco card set was released between 1909 and 1911. Seen as a landmark set in the history of baseball card collecting, they now sell for vast sums over a century later.

Here’s a rundown with ten of the most valuable cards from the set, including lots of info about the player, their achievements, and how and why their card has managed to make it onto the list.

The 10 Most Expensive T206 Baseball Cards

There’s no denying that the T206 set is distinctive. The front of all T206 series cards displays a lithograph of the player-created by a multistage printing process in which a number of colors were printed on top of each other.

It gives cards from the set an iconic look, and it’s a design choice that still holds up today.

Watch this guy open a pack of T206 Baseball Cards and hit a Honus Wagner card?!… 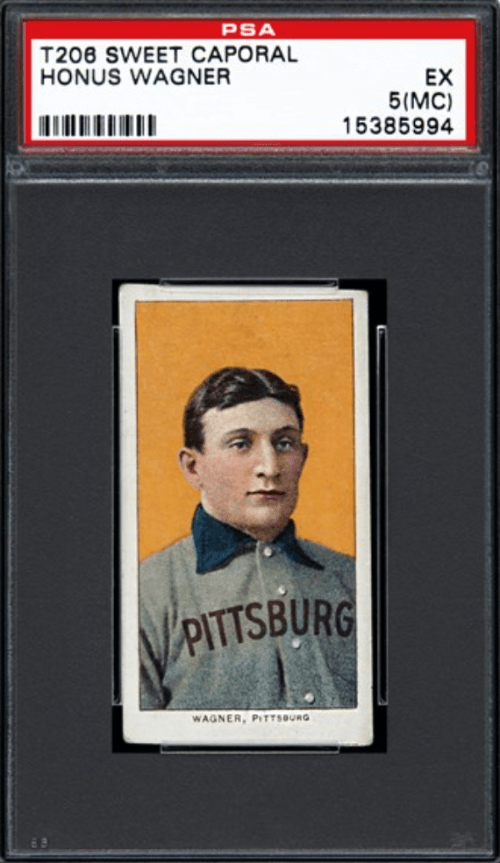 Honus Wagner’s card from the T206 set is widely seen as one of the ‘holy grails’ of the hobby. Wagner won the 1909 World Series and was an eight-time NL batting champion. However, his card tops the list for reasons that don’t relate to his playing career.

“This is the Holy Grail of all trading cards. This card, which resides in one of the most popular sets of all time, features one of baseball’s greatest players and it remains the symbol of trading card collecting.” – PSA

The most popular (and valuable) card from the set, there are only 57 copies known to exist throughout the globe. Wagner’s card was pulled from the collection, possibly because he was a non-smoker, although it may have also related to a fee that the ATC wasn’t willing to pay. The card features a simple colored profile shot of Wagner, with an orange background. 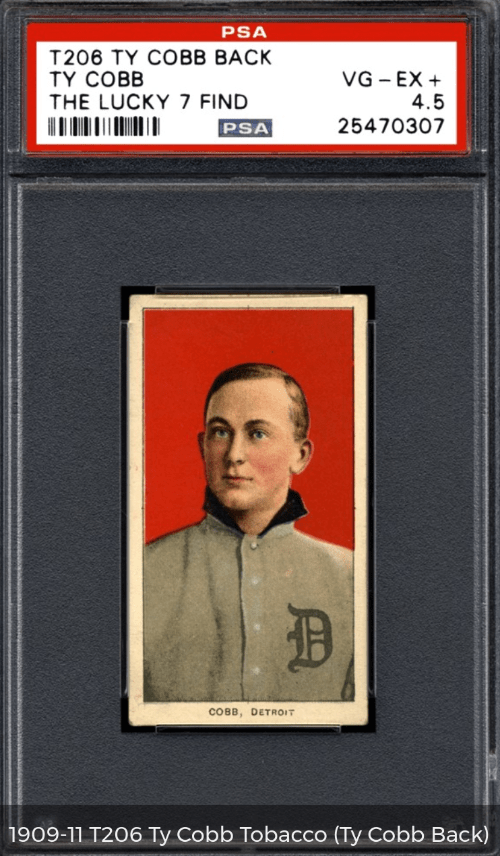 Ty Cobb was a Detroit Tigers legend who still holds the career record for stealing home (54 times) and for stealing second base, third base, and home in succession (4 times), and is the youngest player ever to compile 4,000 hits and score 2,000 runs.

A close second in terms of popularity in the T206 set, this Cobb card is special. Of the 22 cards in existence, there are numerous brand advertisements on the backs – 16 different backs in total. This one notes Ty Cobb as the ‘King of the smoking tobacco world.’ The front of the card features a simple profile image, set against a deep red background. 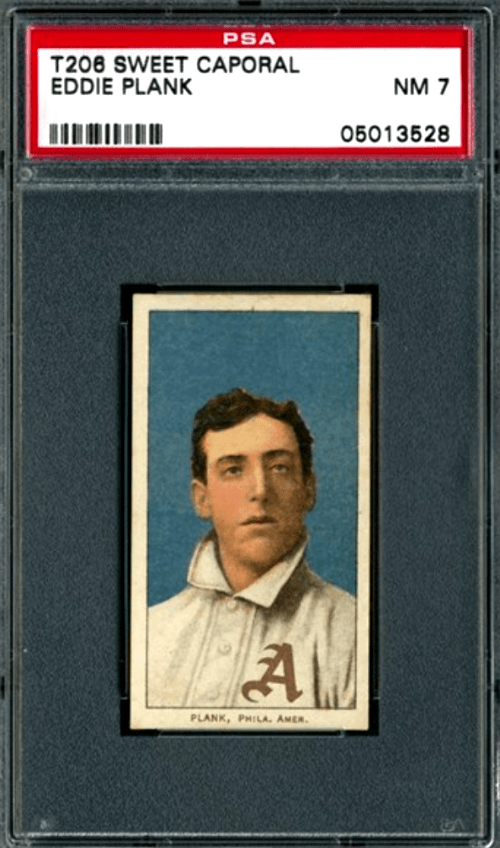 Next up is Eddie Plank. A three-time World Series winner with the Philadelphia Athletics, he certainly matches up in terms of what he achieved during his career. However, the reason for his inclusion is still up for debate.

In another profile shot, his T206 card features a dark blue background color. It’s his only card which is one reason why it’s so valuable, but that’s no reason for it to be comparable to Ty Cobb’s in terms of price.

“This is the second most desirable card in the famed T206 set and the only pose of the HOF pitcher.”

It’s thought that problems with the printing process could be the reason behind the rarity, as they might have been damaged by the press during the manufacturing phase. Issues with centering will often cut into the text found at the bottom, to give you some idea of the potential issues that are typically found with the card. 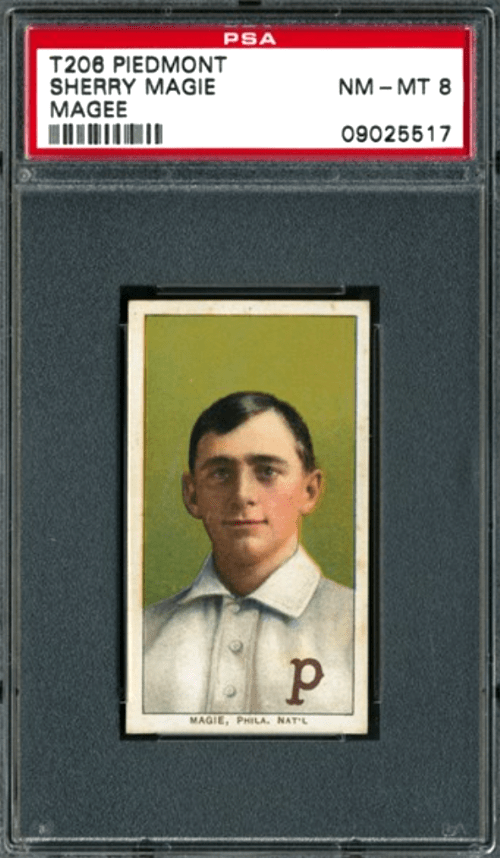 Who is Sherry Magie? Sherry Magee finished in the National League Top 10 in home runs and RBIs seven times, including leading the NL in RBIs four times from 1905 to 1914.

As you might’ve guessed, this is one of the most popular error cards in the history of the hobby. It’s a simple profile shot of the player, with a white border and a mustard yellow background.

Magee’s name was initially spelled incorrectly as “Magie” and was quickly corrected. The correct version was printed in much higher abundance than the coveted error, which is why the latter manages to make it onto the list. In fact, many hobbyists wouldn’t consider a set to be complete without the addition of the Sherry Magie card. 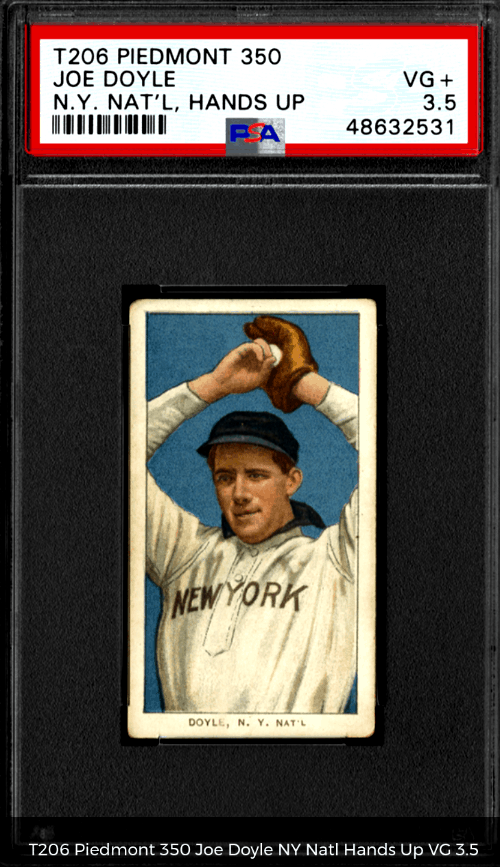 ‘Slow’ Joe Doyle had a middling career, playing for both the New York Highlanders and the Cincinnati Reds. He makes it onto the list due to an error. Some cards mistakenly state that he played for ‘N.Y. NAT’L’, and a second simply says ‘N.Y.’ PIt’s thought that the printer mixed Joe up with Larry Doyle, who played for the New York Giants in the National League.

While the corrected version of the card is fairly common, there are believed to be only eight authentic error cards in existence. As such, it easily makes the list and is seen as one of the most valuable options overall. 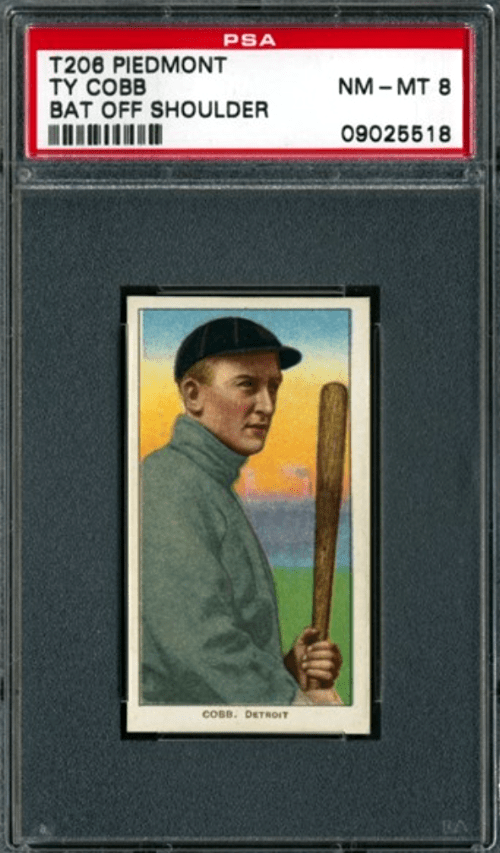 The Tigers’ legend is back again, in a timeless profile shot which sees him clutching a bat in both hands. It’s actually the least scarce of the four Cobb cards from the set, but you can find this card in PSA 9 Mint condition, unlike the others. This means that it’s far more valuable on average, even if prices and interest are higher for the other variations in the set.

“The Green Portrait is by far the toughest of the elite TY COBB group, followed by the Bat on Shoulder, Bat off Shoulder and Red Portrait in order of scarcity.”

No matter the small print, it’s still one of the most valuable T206 cards in existence.

Cobb’s Green portrait is the third of his four T206 options to make this list. As the name suggests, it’s a portrait shot of the legendary player, as he looks slightly off-kilter. The Green Portrait is by far the toughest of the elite group to find in good condition, but it pales in comparison to the value of the ‘Ty Cobb Back’ card seen above. 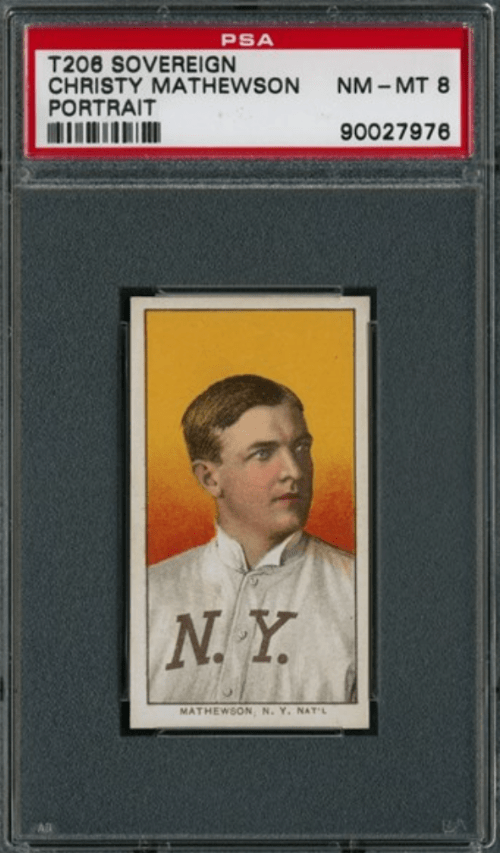 Christy Mathewson (1980-1925) played 17 seasons with the New York Giants, as well as a brief stint with the Cincinnati Reds in 1916. He won a World Series apiece with each team and went on to manage the latter for a couple of years. Having served in the US Army’s Chemical Warfare Service in World War I, he was exposed to dangerous weapons during training. This led to respiratory failure and his eventual death in 1925.

As with other top HoF players, Mathewson has a number of cards in the set. This one features a profile shot of the pitcher, looking off to the right in his NY jersey. It has a red and yellow background and a thick white border design. The White Cap variation is more difficult to find in higher grades, but the White Border portrait is the most popular with collectors. 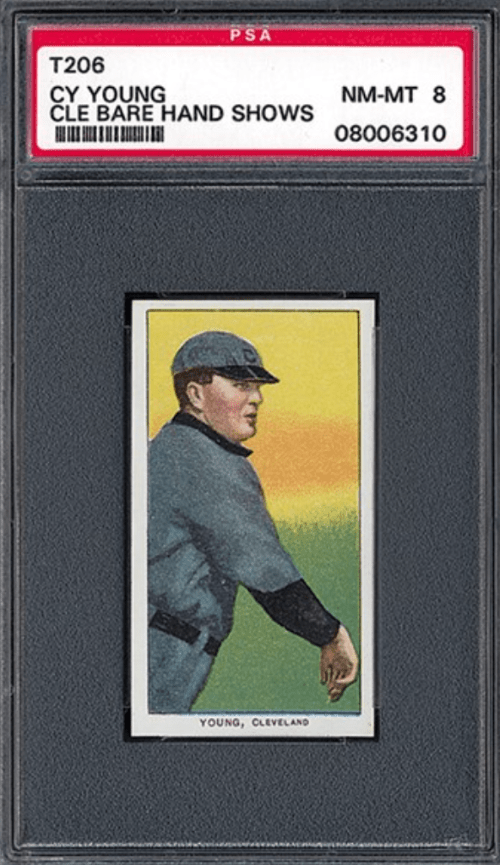 Another World Series winner (1903), Cy Young is best known for his incredible pitching stats. He still holds MLB records for the most career wins (511), along with most the career innings pitched, games started, and complete games. He led the league in wins during five seasons and pitched three no-hitters, including recording a perfect game.

One of three T206 cards to feature the pitcher, you’ll be able to identify this one thanks to the bare hand which is on display on the right side. It features a simple illustration of the player after throwing a baseball, with a yellow and orange sunset, and a green background at the bottom. It also has a thick white border, which is how it earns its name. 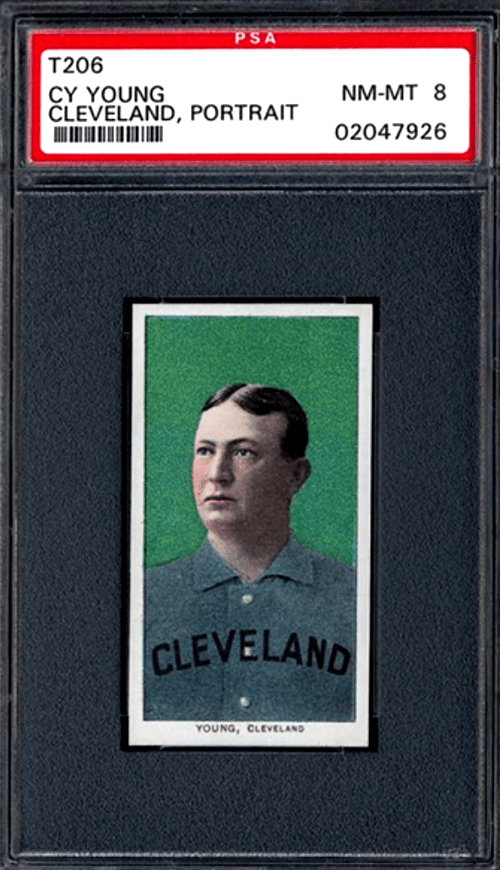 The final card from the T206 set to make the list also features Cy Young. Darker in comparison to the card seen above, the Young Portrait is one of the tougher portraits in the T206 set to find in high-grade.

It features a profile image of the player looking off to the left, with a deep green background and a thin white border. Young is wearing a Cleveland Naps jersey before the team changed their name to the Indians in 1914.

A mixture of the biggest names and a couple of error cards make up the list, with scarcity being the defining factor when looking at the most valuable T206 cards. As always, we’d recommend sticking with graded options, to avoid any fakes or forgeries that are currently doing the rounds at auction.

It’s worth remembering that the majority of cards from the era simply weren’t looked after, while those that were had to survive for at least 110 years to make it to the current day.

In that respect, it’s no wonder that legends like Cy Young and Ty Cobb have cards that are easier to find in the present. Collectors had to keep them safe during two World Wars, and it makes sense that they opted for cards that seemed likely to retain value in the future.

Better grades equate to bigger price tags, while the most valuable cards only have a handful of versions at best. The most expensive T206 cards are certainly high-ticket items and are likely to be the jewel in the crown for any serious collection.

Can we beat the S&P 500 by investing in sports cards? Check out Gold Card Auctions Buyers Club

Questions about the T206 Baseball Cards? Email us at advice@goldcardauctions.com or visit the GCA Facebook Page.