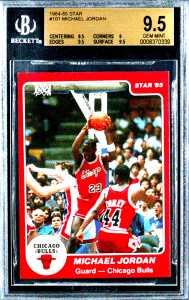 Michael Jordan and valuable cards go together like basket and ball. His playing days might be long gone, but a selection of his collectible cards have aged like fine wine, and they can still have a major impact on the hobby as a whole.

The thing is, he’s amassed a large collection of cards over the years, and it can sometimes be difficult to tell if they’re worth anything.

We’ve come up with a list containing five of the most valuable Michael Jordan cards, with info about each one, and an explanation as to why they’re so expensive in the first place.

Why Are MJ Cards So Valuable?

There are no two ways about it. Michael Jordan rookie cards and cards, in general, are some of the most expensive basketball cards that money can buy.

It’s partly a case of being in the right place at the right time, but there’s no denying that he helped to revolutionize the sport for the better, taking charge of his team as he led the Red Bulls through one of the most dominant eras in modern sports.

He’s the original star player in the NBA, loved all over the world, and Jordan also made basketball relevant again in the US. Everyone wanted a piece of MJ at the time, which is why his collectible cards helped to kickstart the hobby in the mid 1980s.

In terms of his collectibles, the earlier the better is generally preferable, but only if you’re looking at his Fleer or Star rookie card options, which we’ll discuss in detail below.

The majority of the cards that make the list are incredibly rare, or they were released decades ago, so you’ll need to be on the lookout for the best possible grades which is why they tend to be so pricey.

The list has a range of cards from three different decades, including RCs, signed patches, and even an appearance from LeBron James!

We’ve looked at sales over the last six months to bring you a list with the five most valuable MJ cards on the market. The cards are listed from most to least expensive, so be prepared for some heavy hitters to start off with.

It’s hard to find a more iconic card than Michael Jordan’s 1986 Fleer. Everything from the red, white and blue background to image itself is memorable, as Jordan soars towards the net in a classic action shot.

The set helped to kickstart the hobby again in the mid-80’s, partly thanks to Jordan, but also because it boasted rookie cards from several all-time greats, including Charles Barkley, Karl Malone, Isiah Thomas, and Hakeem Olajuwon. It’s a solid supporting cast for the greatest ever.

A 1986 Fleer Jordan card which earned a PSA 10 grade went for $99,630 in May 2020, making national news at the time. It deserved the attention, especially as the card had continually broken the record over the past two months. The very same card went for $48,600 in March of the same year, marking an increase of over 50% in roughly 60 days.

This is partly attributed to the release of The Last Dance, as His Airness hit mainstream attention once more, and fans began clamoring to own a piece of basketball history.

They were plentiful when the set was originally released, so why is it so expensive? The borders found on the front of the card are particularly susceptible to wear and chipping, and the card can also have issues relating to centering.

Seen as ‘the Jordan RC’, it’s easy to see why this classic option makes the list of his most valuable cards right now. 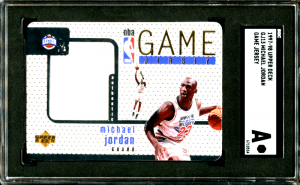 Despite being released over a decade after the Fleer, this card is still comparable in terms of value and prestige. The ’97 UD Game Jersey set signaled the start of the Jersey Patch craze, with a large, luxury player patch that comes from Jordan’s ‘92 NBA All-Star game.

There’s no need to worry about a hangover from the junk wax era, as the odds of pulling a Jordan card from this set was 1 in 55,000. That’s Charlie and the Chocolate Factory levels of luck, and it’s a golden ticket by modern standards.

Must Read: Must Own Kobe Bryant Rookie Cards

As well as the massive patch and a unique design, the addition of an aftermarket signature on the front only helps to make it more attractive for potential collectors.

There are also a couple of images of Jordan on the front, just in case you weren’t sure which player kickstarted the concept of patches.

It’s somewhat basic compared to the multitude of special patches that are released in the modern era, but it’s still a real piece of sporting history. As an experimental piece, the edges are susceptible to damage, as well as the lining of the patch itself.

He’s pictured in his All-Star gear rather than his Bulls uniform, but that’s no major issue considering the prestige of the UD brand, and the fact there’s a patch from the ‘97 game attached.

If you didn’t know, this is the earliest Jordan card you’ll be able to find, produced by the little known Star Company. It’s not considered to be his official rookie card by any measure, which is why it’s given the XRC designation. (Extended Rookie Card.)

The card features a deep red border, with a good action shot of Jordan dominating in his classic Chicago Bulls jersey. He also has Rookie of the Year (#288) and Olympic team (#195) variants, although we’d stick to the base card if you’re looking for an investment piece on the market.

Given the age, it’s only natural that there aren’t many mint versions left in the world, and the first BGS 9.5 Michael Jordan XRC was only found in October 2014. There’s always a chance that others could arise, but you’ll need to be wary with ungraded versions, which regularly do the rounds.

It’s alleged that the original owner of Star had been working with a print shop to produce new backdated 1980’s Star cards, causing difficulty in terms of authentication. This has led Beckett to be the only grading company willing to take on their selection of cards.

XRC or no, the Star is another great option from the mid-1980s, and it’s literally the first-ever Jordan card. That makes it prestigious in its own right, although it’ll never compare to the Fleer in terms of value. 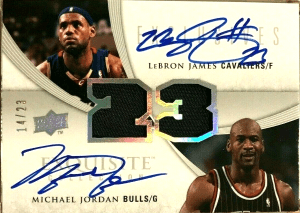 One player who can match up to MJ in terms of star power is LeBron James. A card featuring both is always going to be a prospect when it comes to any list of the most expensive cards, doubly so when it’s part of the Upper Deck Exquisite Basketball collection.

The card has everything you could want, with the card split in half to share dual signatures from LeBron and MJ. There are only 23 overall to match their shirt numbers, and you’ll be able to check via a serial number located on the front of the card. In the middle is a patch, shaped in the form of a 23.

Action shots of both players take up separate quarters of the card, while Jordan’s image comes out of the background is a nice touch.

The theme makes sense as they both shared the shirt number, despite the fact that James’ rookie season occurred when Jordan retired for the third and final time.

LeBron actually dropped the No. 23 number in time for the 2019-20 season, passing it over to Anthony Davis. Regardless, it’s still a great card and one that is likely to continue to rise in value over the next few years.

As the name suggests, his 2009-10 Exquisite Collection is another premium option, and it’s the newest card on the list by a fair margin. 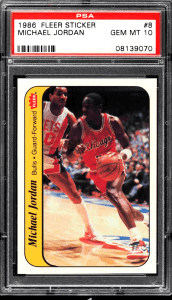 If the six-figure price tag and the issues found with the 1986 Fleer card have you worried, you could always check out the sticker variant that was released in the same year. Part of an 11-piece sticker set was inserted into 1986 Fleer packs, a mint version will sell for roughly a quarter of the price of the Fleer card.

The sticker set is helped by the addition of legendary players like Magic Johnson, Larry Bird, and Kareem Abdul Jabbar, making it extremely difficult to collect if you’re looking at good grades.

A young Jordan is pictured mid-dribble, with his tongue out as he concentrates on leading the attack for the Bulls. Everything from the vintage kit to his Nike sneakers is clearly visible, even if it’s difficult to get used to an image of Jordan with hair.

You’ll have to pay special attention to the edges, to ensure there’s no peeling. The stickers also suffer from centering issues, which was common at the time. They’re two of the main reasons why it’s so hard to find mint editions, while the price is also influenced by the association with the card version of the Fleer.

Just try not to think about all of the Jordan stickers that were carelessly left on walls or just peeled off over the years.

2020 has been a difficult year for most, but the release of The Last Dance documentary has helped to inflate Jordan’s card prices in recent months. Owners and investors are sure to be happy at any rate.

Average one-day sales for Chicago Bulls items spiked a staggering 5,156% following the first episode, while all sellers and auction houses have noted that Jordan cards are currently flying off the shelves.

In an interview with MarketWatch, the founder of Steiner Sports Memorabilia acknowledged that Jordan’s cards helped to bring the hobby out of regional markets, as everyone wanted his cards around the world. Brandon Steiner said;

“Let’s be clear here, Michael Jordan, we all should be giving him a check, he lifted sport licensing onto a legitimate level. It was practically nothing before he got into the game.”

Even now, his cards are the gift that keeps on giving, although it’s easy to say with the benefit of hindsight. It’s great if you were picking up Jordan memorabilia six months ago, but it’s got to be tough if you sold a card only to see it double in price after roughly 60 days.

Options like his PMG cards might have failed to make the list, but they’re further examples of rare options that should be on your radar as they continue to beat records every time a high-grade version is listed.

The boost seen after The Last Dance is well documented and could be a flash in the pan considering the mainstream attention Jordan has been getting. However, prices of MJ cards have been rising steadily since his retirement, so this could just be a bump along the road that happened to speed things up a little.

Given the 50% increase in recent months, the Fleer gets the majority of the attention from collectors and investors. However, almost every Jordan card has seen rising prices in 2020.

When it comes to the best ever collectible basketball cards, it’s clear that Jordan has to be considered in the conversation. The GOAT player deserves GOAT cards.