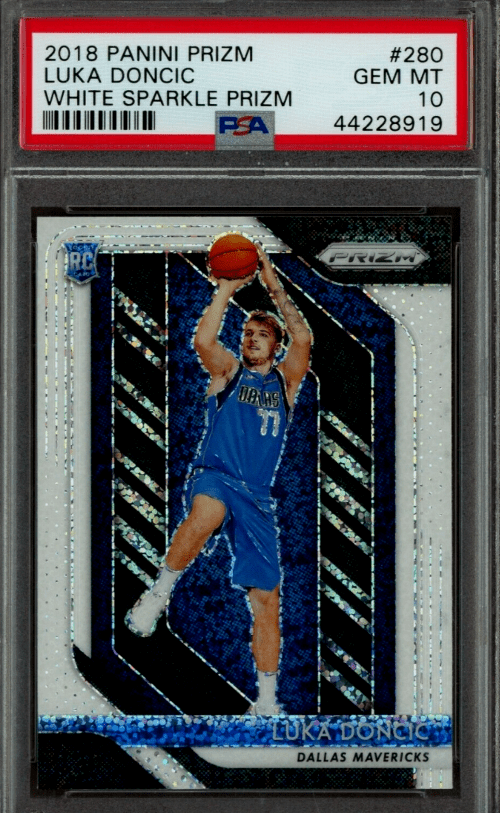 His collectibles are already some of the most valuable overall, as he continues to leap each hurdle effortlessly. NBA records include the most points in a playoff debut game (42), as well as being the first player in NBA history to log 30+ points, 12+ rebounds and 15+ assists in a game with 30-or-fewer minutes played.

Here are nine of the most valuable Luka Doncic cards, with lots of info about how they made the list, along with investment advice for the future.

Given his fame and form, it’s clear that any rare Doncic card in a decent grade will sell for good money. There are a number of interesting options from the past few years, but the most valuable Doncic cards are definitely his RCs.

Must watch Luka behind the scenes video… Girlfriend? Smoking Mom! Type of Car he drives! and much more… kid is the future of the NBA!

There are 27 RCs in total, while he has over 2,000 cards overall, counting the various parallels.

It’s no wonder that it can be confusing if you’re looking for his ‘best’ cards, especially as values differ so widely depending on a variety of factors. We’ll start with one of the best Doncic cards that money can buy. 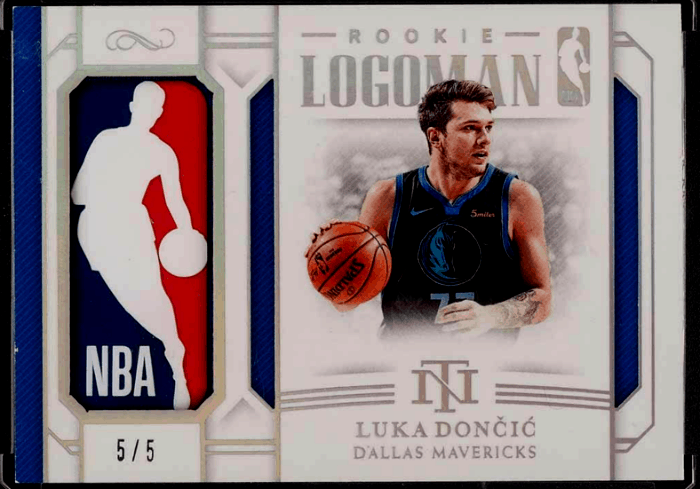 National Treasures have carved out a real niche in the collecting world, with premium products that represent the pinnacle of the hobby. They regularly turn out to be the most expensive options when looking for valuable cards, and Doncic’s 2018 release is no different.

From the Rookie Logoman set, this card is even rarer than the base version. There are no parallels, while there are just five copies of the signed Logoman card on the market. The combination of the brand, rarity, and stunning design make this one of the most valuable 2018 cards overall. 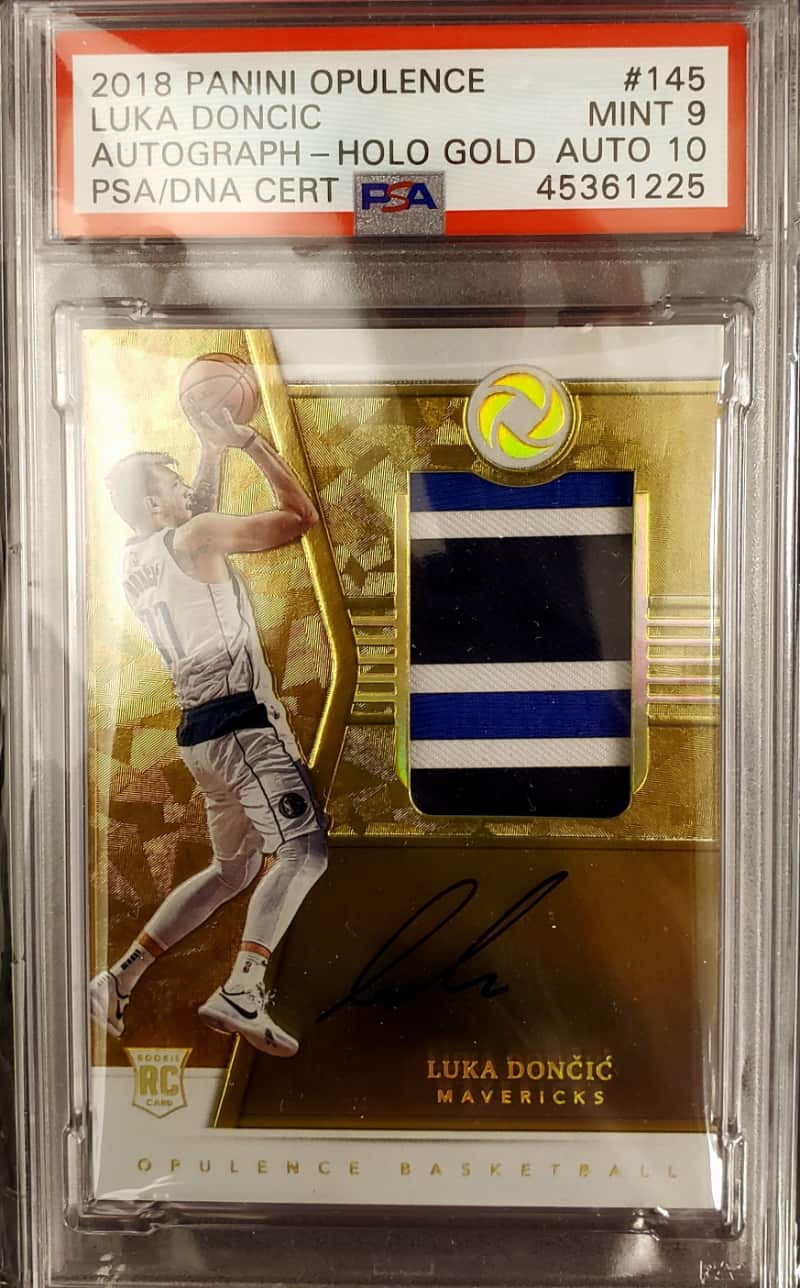 The 2018 Panini Opulence set is another which is packed to the brim with expensive options. We’re looking at the Rookie Patch Autograph subset, which features 25 cards and a print run of just 79 for the base version.

Gold is the overall theme for the set, and this Doncic card is no different. Everything about it looks and feels premium, from the large on-card auto to the quality of the swatch. You’ll find a trio of rare parallels, which up the value considerably. It’s another worthy addition to the list. 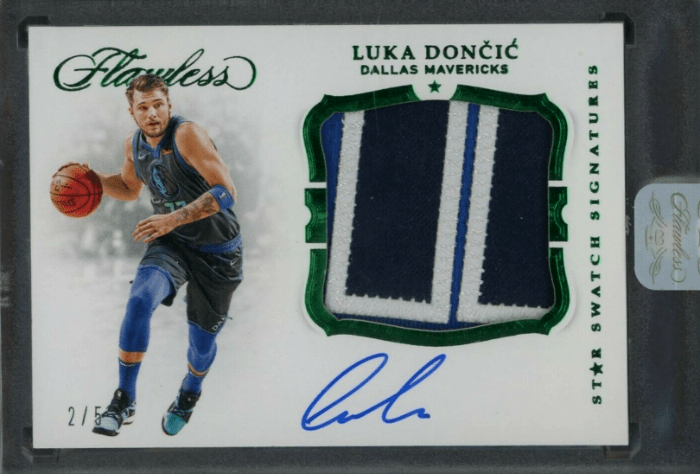 Next up is another premium card which is sure to be on the radar of most serious collectors. The Flawless set is packed with hits, including this Doncic RC with features a patch and an on-card auto.

It has a clean white background, with a simple trim that corresponds with the parallel color. The auto is found at the bottom, filled in blue ink, while the patch is on the left of an image of Doncic soaring through the air. If you’re on the lookout for potential investment pieces, either the Ruby or Gold versions are worth a considerable amount, and could yet go up further. 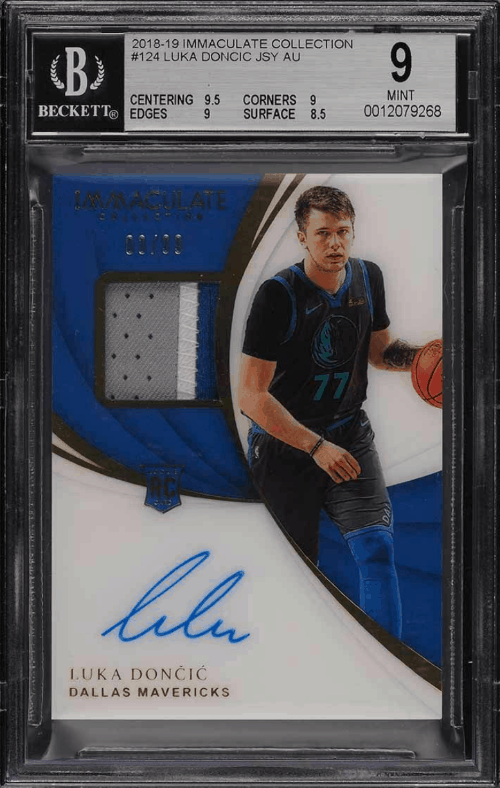 From the Rookie Patch Autographs set, 2018 Immaculate is another high-end option that is worth more than the average collectible. As with many of the most valuable Doncic cards, even the base version is serial numbered (/99), while it comes with a patch, on-card auto, and a range of parallels which are exceptionally rare.

They didn’t pick the best image of Doncic for the front, and it’s not as prestigious as many of the cards mentioned above, but it still goes for a hefty fee. 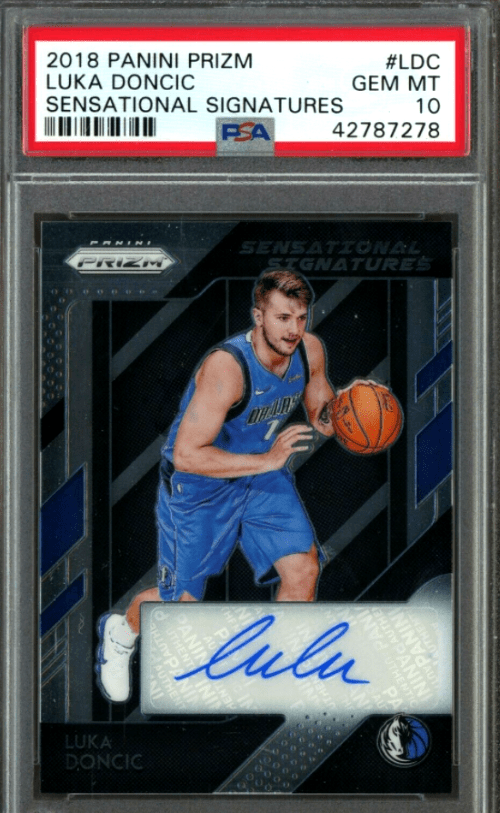 The next card is found in the 2018 Panini Prizm Rookie Signatures Prizms Silver set. It may lack the parallels seen with the base Prizm, (which is found below) but it’s another Doncic card which should definitely be on your radar.

It features an image of Doncic with a ball held aloft behind his head, and there’s a Prizm logo in the top right corner.

The lack of a patch and the stickered auto are the main reasons for a drop off in price compared to the cards seen above, but that hasn’t stopped mint versions for selling for a lot of money. Expect to pay at least five figures for a graded version. 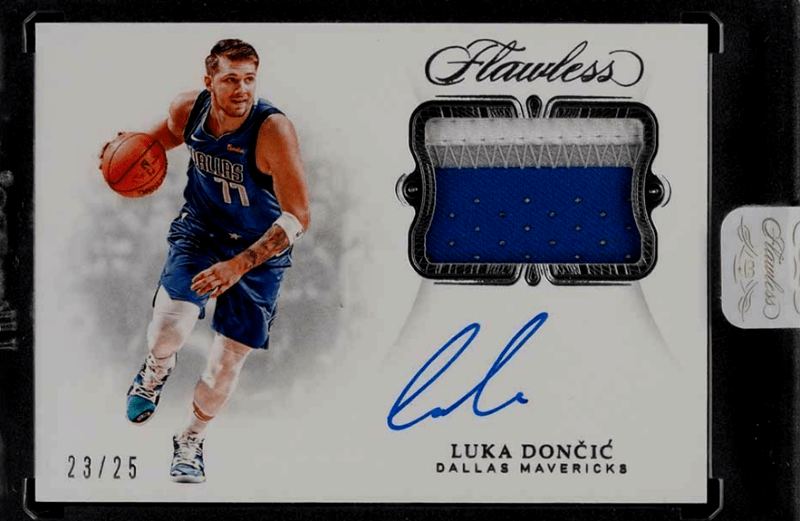 The second card from the 2018-19 Flawless set, this one has a landscape design, rather than the portrait option seen above. As with the card that comes in second on this list, it has a patch and an on-card auto, filled in thick blue ink. Doncic is found on the left of the card, with a serial number found at his feet.

It’s numbered to 25 copies, so it’s not as rare as the parallels found with the #VP-LDC. However, it’s still valuable in it’s own right, and it is a slightly cheaper option in comparison. 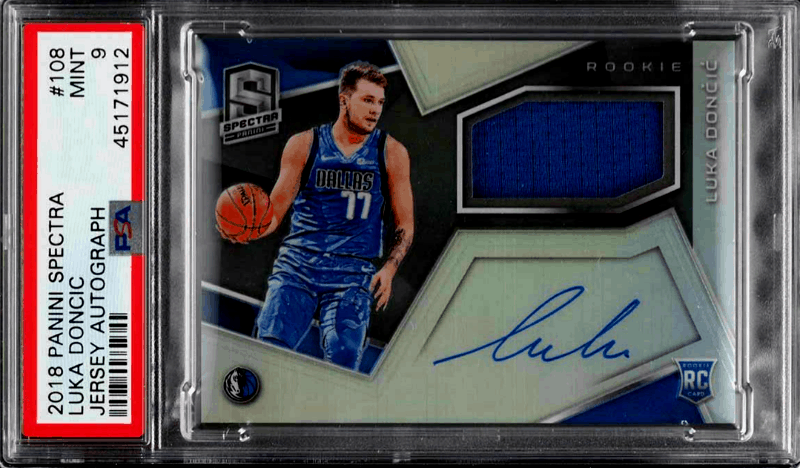 The 2018 Panini Spectra set might not be the most prestigious to make the list, but it has a great Doncic card which is worth keeping tabs on. Another Rookie Jersey Autographs card, the subset name gives a clear indication of what to expect.

It has a busy design, with blue, yellow and white segments cut across the card. The patch is found on a white chunk at the bottom, and there’s a patch on the top right corner. There’s also a range of Neon parallels. 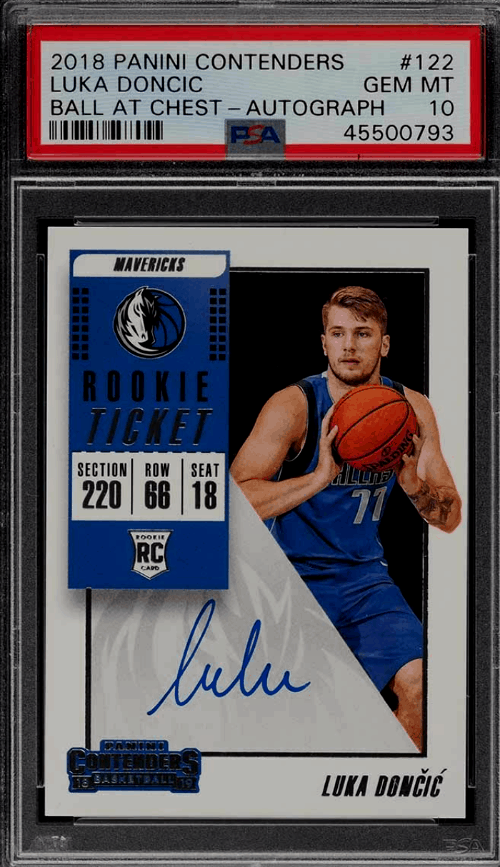 Always a favorite with collectors, the 2018 Panini Contenders set contains a number of Doncic cards that attract lots of bids and a significant price tag. Most follow the Rookie Ticket design, with a couple of image variations to look out for.

Depending on the ticket version, values begin to increase rapidly. As such, we’d look at the Cracked Ice version if possible, as it’s always a hit with hobbyists. Numbered to just 10 copies, the Premium Gold edition is likely to be the rarest you’ll see at auction. 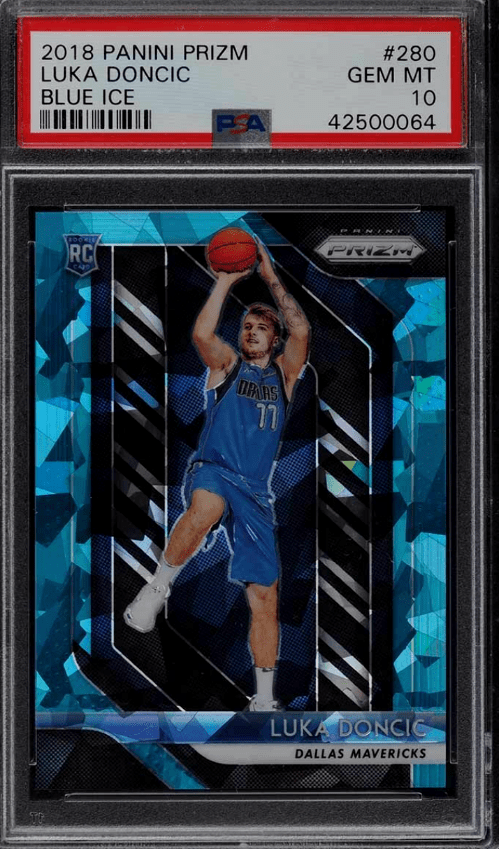 A prime copy of the 2018 NT might be worth several times more than Doncic’s Panini Prizm RC, but it’s still one of the more valuable cards to bear his image. Rather than the Silver Prizms card listed above, we’re looking at the base version, which comes with a heap of parallels which raise the price significantly.

It features a simple image of Doncic leaping up to take a shot, with one leg raised in the air. As with the others, it has NBA logos and licensing, as well as an RC logo found in the top left corner. The card also comes with a unique Prizm background, helping to set it apart from the rest of the pack.

Doncic is one of the few players to actually live up to the hype, taking his game to the next level since he joined the NBA. His time at Real Madrid definitely got him noticed, but many fail to acclimatize to the best league in the world, especially without seeming to break a sweat.

His NBA RCs aren’t his earliest cards, but they are the most expensive if you’re hoping to pick up a rare parallel at auction. (For example, he has a number of earlier Upper Deck cards, but they pale in comparison to the five-figure fees his 2018 RCs will easily sell for at auction.)

His cards are exceptionally valuable considering he’s only been in the NBA for two years. Any signed or low-serial numbered versions are probably worth your time, and there’s good scope for profit in the future.

He’s a special player, and he’s picking up the records to prove it. A couple of additional All-Star appearances will only make prices rise, while serious injury looks to be the only way he’ll have his career derailed.

He’s also insanely popular. For example, he earned a 94 rating in NBA 2k21, while he’s about to receive his own Air Jordan 35 Special Edition. The ‘Luka’ shoe should debut in May 2021, while he has the second most purchased jersey this season, trailing only LeBron James.

As such, they look to be some of the stronger investment pieces on the market as of now. Given the prices involved, we’d look at graded options whenever possible, as you’ll be able to avoid any forgeries or scammers online.