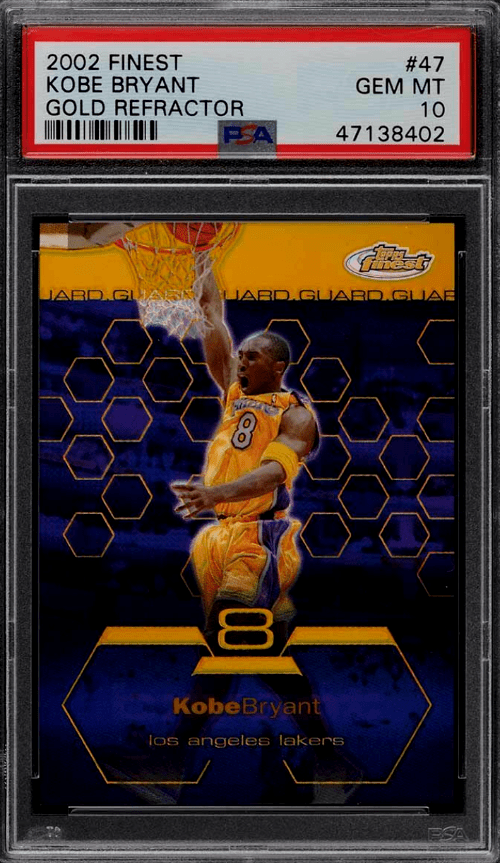 Kobe Bryant needs no introduction to most. He is one of the greatest NBA players of all time and won 5 NBA championships during his career, as well as being named the NBA Finals MVP twice and the 2008 NBA MVP. The LA Lakers legend was also selected for a stunning 18 NBA all-star games.

Bryant spent his whole career with the LA Lakers who took his as the 13th overall pick of the 1996 NBA draft which he entered straight out of college. He became the first Shooting Guard and just the second player overall to be drafted straight out of high school.

It was announced that Bryant would be inducted into the Hall of Fame in April 2020 just after his tragic death. Bryant sadly lost his life alongside his daughter in a helicopter crash at the start of 2020.

Unsurprisingly most of Bryant’s most valuable cards come from his rookie year and hold extremely high values. There are also a handful from later in his career that for one reason or another are valued really high, some of which make this list.

Most of these cards are genuine pieces of basketball history, so any collector would be lucky to own them.

The card is a very simple looking card with Bryant the center of attention. However, do not be seduced by the card’s simple looks as this card is by far the most desirable Kobe Bryant Rookie card on the market and one of the most sought-after rookie cards in the whole hobby

This was the first year that Topps produced their Chrome Basketball series and were initially just a retail set. This particular card was in the insert and appeared once approximately every 2640, which means that it was a rare find from the start.

Unfortunately, and probably because the card was from a brand-new retail pack, the card does not show up in mint condition very often. A sensible valuation for a mint 10 condition card would be around the $20,000 mark, however, they can easily fetch more than this. The last BGS 10 cards sold at auction were in 2017 where it sold for a staggering $33,500.

Only the truly lucky few can own a copy of this card, and for the rest of us it might be a case of looking at the base version to get out hands on it. This card is a lot more common but will still set you back around $2,000 to $3,000 if you wanted it in mint condition. 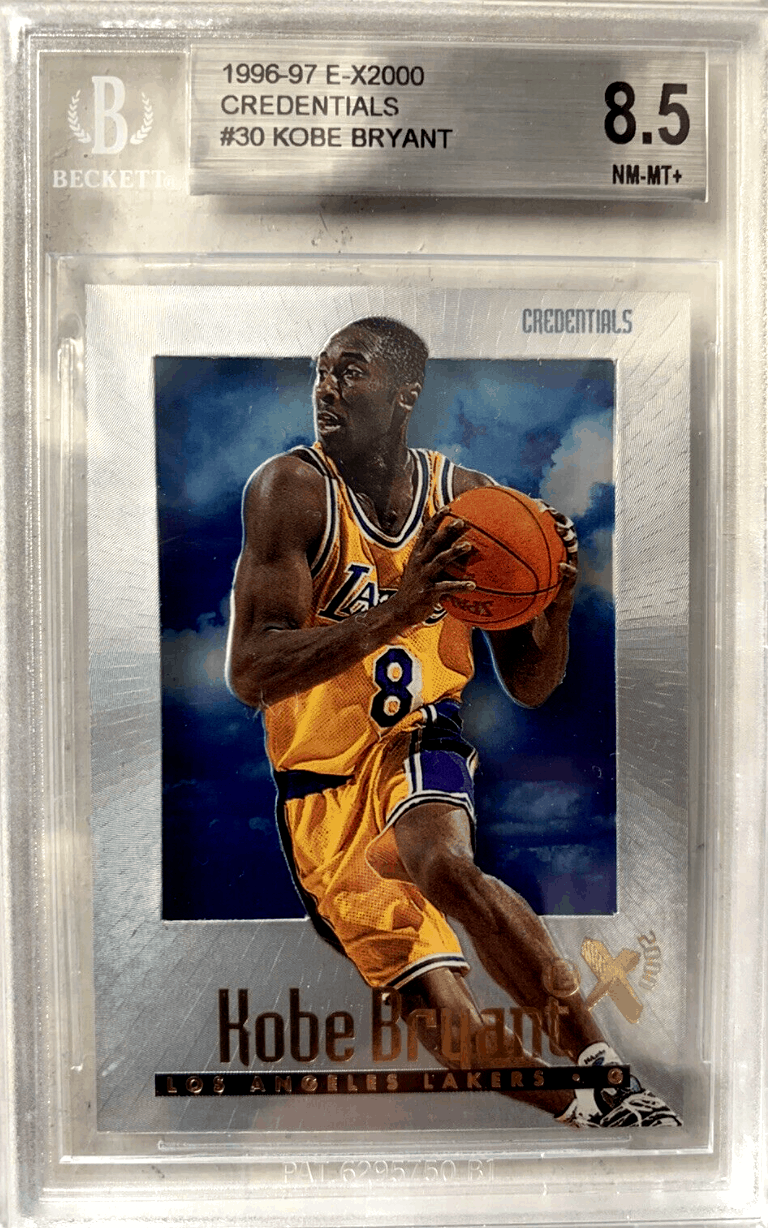 This set of cards may not immediately spring to mind when you think of historically popular rookie cards, but this one certainly is very popular. This is almost definitely at least partly down to the very unique and extremely cool design.

It again features Bryant as the sole focus with a ball in his hands on a background of crisp white clouds in a blue sky. The border in the Credentials version is an off-white very light blue color which is very aesthetically pleasing.

There were just 499 of the Credentials versions made making the card relatively rare, although not impossible to find. It has however become hard to find the card in mint condition, which has contributed to a gem mint 10 valuation of around $10,000 and $15,000.

The base version is easy to spot as it has a green border instead of the light blue one and maybe an option for collectors who do not just have $15,000 lying about. These can be purchased for around $300-$500 on eBay. 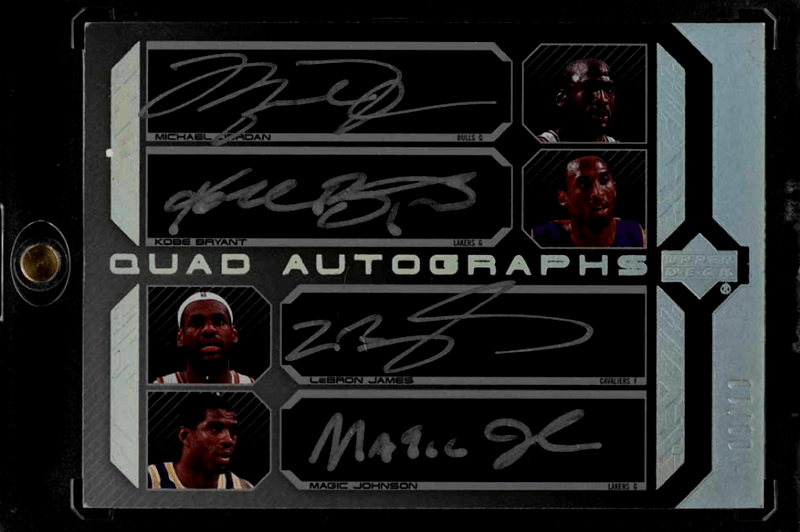 A card that was personally autographed by probably the 4 greatest players of all time, surely that is too good to be true. Well, it is not because here we are, this 2007 Upper Deck release turned absolutely everyone’s heads.

“Unsurprisingly, with a print run of just 10, not many people put this card on the market. In October 2020, an ungraded copy was listed for auction and it sold for just shy of $40,000.”

The card is also beautiful. It has a black background with silver writing and features and the on-card autographs are in a nice silver pen. There is a picture of each of the players next to their signatures and they are serial numbered out of 10 on the front. One very small criticism is that the serial number can be quite hard to see.

A true beauty of a card that features in gold Lakers uniform dunking on a futuristic-looking dark blue background with golden hexagons. All of the detailing and writing is gold and it also has a gold header.

The card itself is not particularly special compared to other similar cards, but it is probably the historical context in which it is framed that gives it the value. 2002 was the 3rd of the Lakers 3 NBA Championship wins in a row at the start of the 2000s and is also the year Bryant was named the All-Star game MVP for the first time.

This version of the card had a very short print run of just 25 and so holds a very high valuation. In a gem mint 10 condition, you could expect this to sell for around $10,000. 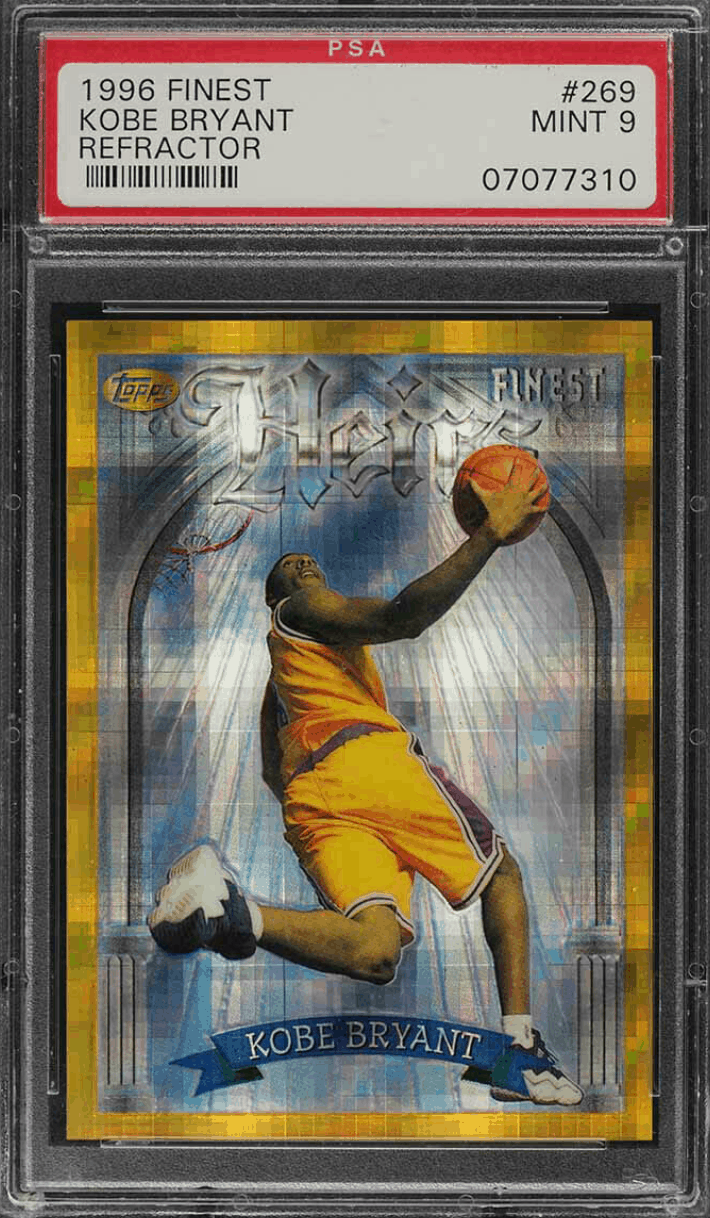 The second Finest Gold to make this list is the one released in Bryant’s rookie year. It is another good-looking card and features Bryant mid-air in the Lakers uniform he would become synonymous with throughout his career.

The silvery background makes Bryant really stand out on the card and gives him a real ‘holy-like’ look. The word ‘Heirs’ is written across the top in big lettering and boy did this turn out to be accurate, with Bryant taking up the crown of the legends that came before him.

There are 3 parallels of this card, bronze, silver, and gold. The gold is by far the rarest and therefore most sought-after card which translates into by far the highest value. They are valued at around $4000 but have been known to go for almost double that on the rare occasion they are found in mint 10 conditions. 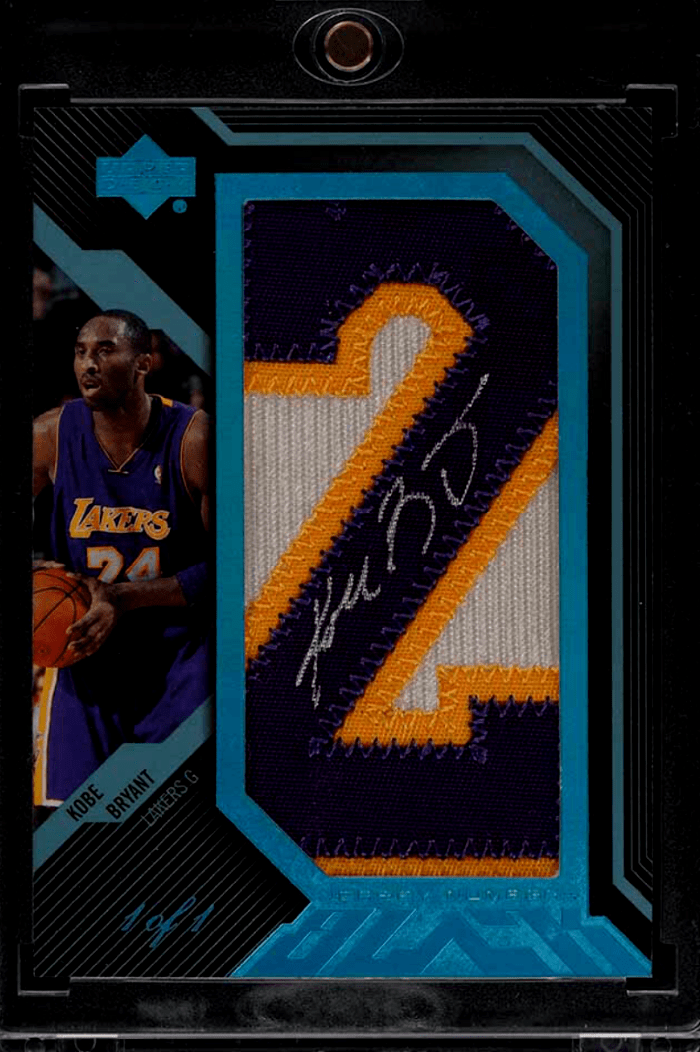 This is one of those types of cards that just blows everything else out of the water. The main attraction is the huge patch to the right that is a big number 2 and an extremely rare on-patch autograph up the diagonal of the 2. The black and blue theme of the card makes it really stand out.

This is a true one of one so if you have just got your heart set on it you may be out of luck. It did however recently make itself to auction where it eventually sold for $21,600 after 57 bids. 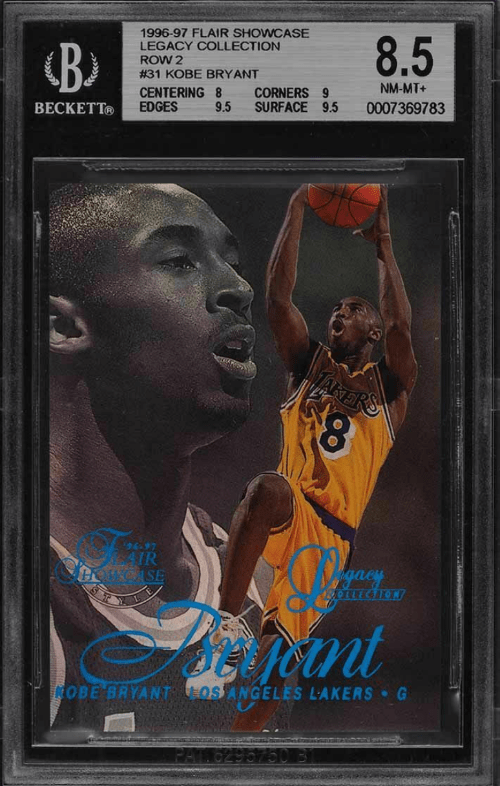 Another card to feature Bryant in his iconic Lakers uniform in full swing mid-game. This card has the unique feature of multiple pictures of Bryant with one faded in the background.

The 2 more common parallels have values below this accordingly so they might be a good alternative for collectors on a budget. The flair set had 3 parallels, row 0, row 1, and row 2. Row 0 is also called the legacy set and is by far the rarest of the lot, with each card being serial numbered up to 150. This card is valued at around $5,000 in mint 10 condition and consistently achieves this valuation at auction. 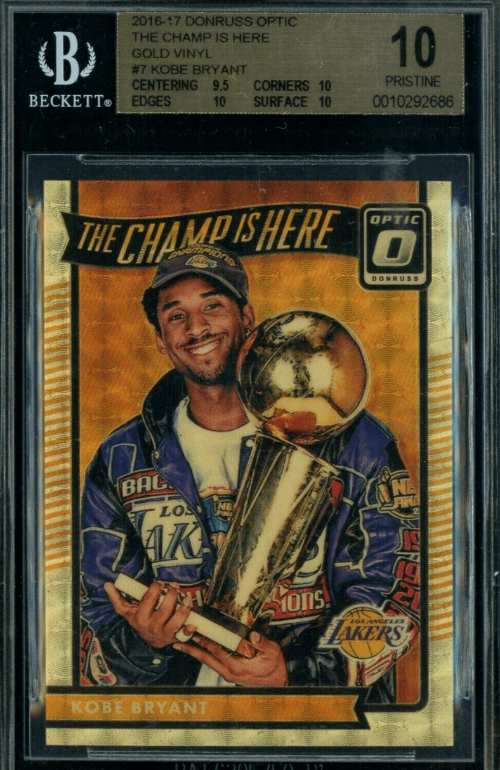 Which two Kobe Bryant cards are worth the most money? The “1996 Topps Chrome Refractor” and the “2003 LeBron James Kobe Bryant Upper Deck HR Dual RC Auto”

Which Kobe Prizm cards are worth money? The “2019 Kobe Bryant Panini Prizm Black” and the “2016 Kobe Bryant Donruss Optic Gold Vinyl Prizm The Champ Is Here”

Will Kobe Bryant cards will increase in value most overtime? The Topps Chrome rookie card are parallels are the best over the long run for maximum ROI

Which basketball cards from the 90s are worth the most money? Jordan cards and Kobe rookie cards… enough said.

There are a few things that can give immediate boosts to rookie card values whilst a player is still playing. They include breaking records, being named MVP, or winning championships. After playing days are over, the retirement itself, an induction into the Hall of Fame, or the player’s death can also boost value.

Bryant has already gone through all of these events with his Hall of Fame induction coming posthumously back in April 2020 and the ceremony set for spring next year. Considering this it could be easy to look at the rookie card situation from the outside and say Bryant’s value has probably peaked.

To summarise, Bryant’s is a true legend of the game and his name is going nowhere. His legend will continue to grow for decades and this will translate well to his trading card value.