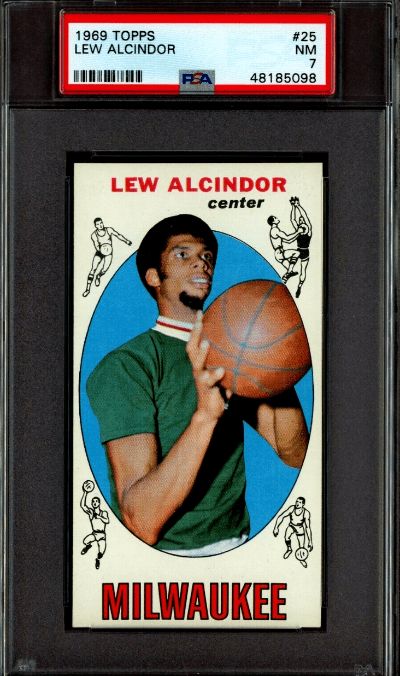 Basketball cards weren’t all that popular in the ‘60s, but that hasn’t stopped them from picking up in price in modern times.

The ‘60s had a dominant team in the Boston Celtics, while Wilt Chamberlain became the only player to score 100 points in a game against the New York Knicks.

The current NBA logo debuted in 1969 with the silhouette of Jerry West, and it’s one of the few aspects of the 60’s basketball that is still relevant today.

Related: Most Valuable Basketball Cards From the 1990s

Here’s a rundown with seven of the most expensive ‘60s basketball cards, with heaps of info about the players, the cards, and everything else you could possibly need to know.

There are a couple of lean years, but there are some expensive options, including the usual mix of RCs and rare releases.

As they’re all vintage options, we’ll be looking at the highest PSA grades, as well as the most popular cards when picking the ones that made it onto the list. If a card is particularly susceptible to flaws we’ll make a note below.

We’ve listed the cards in chronological order, so we’ll be starting off in 1961, with a familiar name for most collectors. 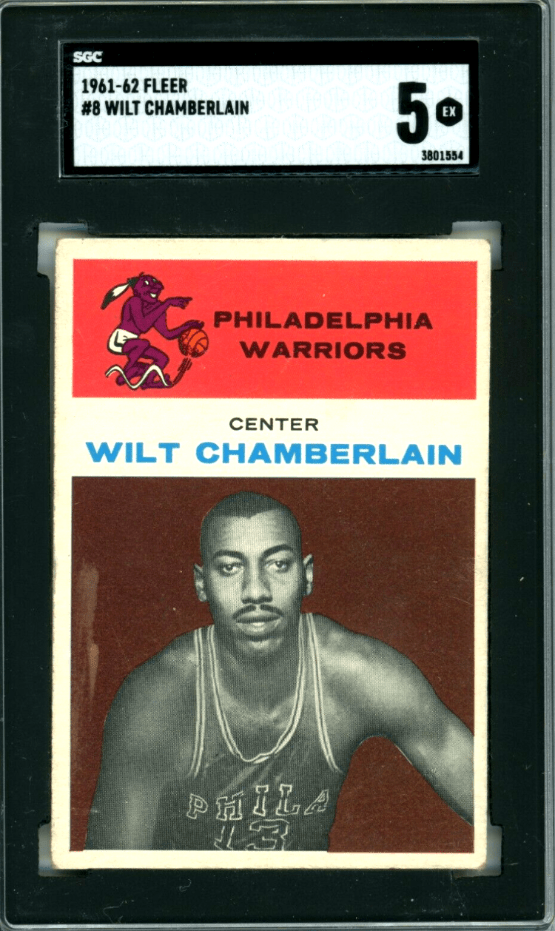 A real legend, Wilt Chamberlain is the only NBA player ever to score 4,000 points in a season. He also set NBA single-game records for the most points (100), the most consecutive field goals (18), and the most rebounds (55), while Chamberlain retired as the all-time leader in career points with a total of 31,419.

In terms of trophies, he has two NBA championships, earned four regular-season MVP awards, the Rookie of the Year award, one NBA Finals MVP award, and was selected for 13 All-Star Games.

Considered by many to be one of the most attractive vintage collections of all time, 1961-62 Fleer Basketball also has some great rookie cards. The company decided to release a small basketball set with 66 cards, although they didn’t follow up with another the year after.

Chamberlain is pictured in the bottom section set against a solid red background, with the top dedicated to his team name and logo. His name is found in blue text in the middle, and it has a plain white border. 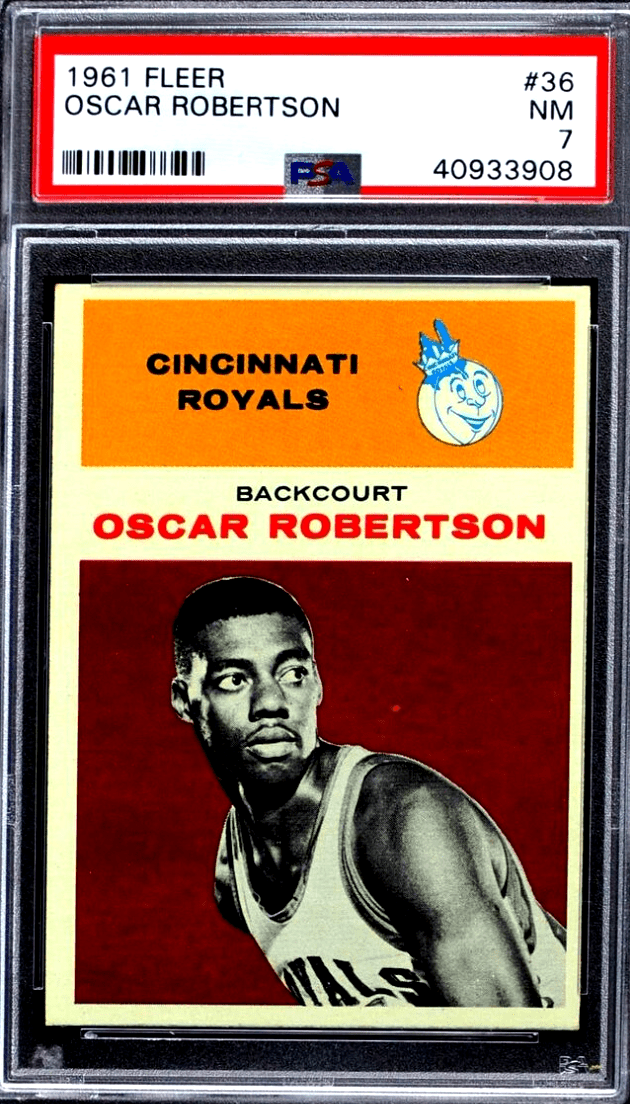 Oscar Robertson picked up 26,710 points and 9,887 assists during a prolific 14-year career in the NBA, overcoming an astonishing level of racism along the way. He’s a 12-time All-Star and 11-time member of the All-NBA Team, while Robertson was also the first player in NBA history to average a triple-double for a season.

The 1961 Fleer has the same basic design as the card seen above, with a black and white shot of the king of triple-doubles found in the bottom segment, and the same deep red background.

However, the top segment is yellow, while the Royals logo is found on the right-hand side, rather than the left. His name is found in red text across the middle. As the only Fleer Basketball set from the era, prices are set accordingly. 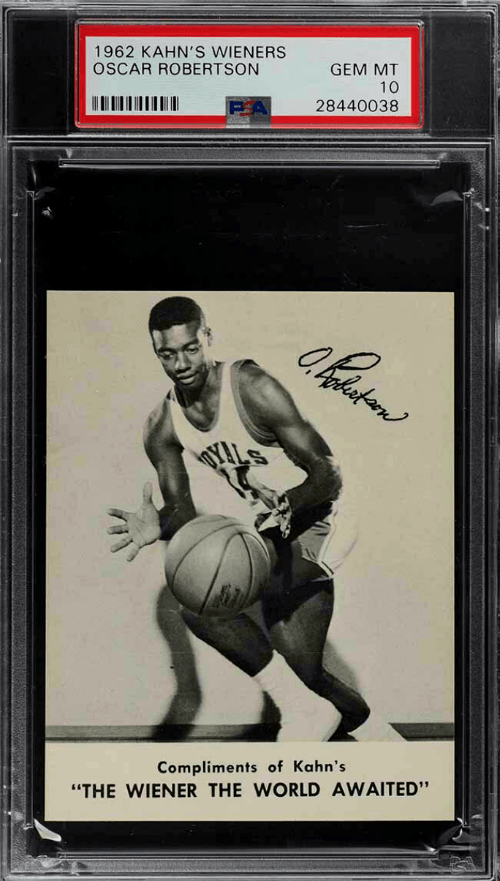 This is the second card to feature Robertson on the list, and it’s a bit of an oddity. So, the name of the 1962 Kahn’s Wieners set is due to it being produced by the Ohio meat company.

Each unnumbered card measures 3-1/4” by 4”, featuring a black and white image of a sporting star from the era. The bottom border notes; ‘Compliments of Kahn’s; The wiener the world awaited”.

The posed shot features Robertson in the process of catching a pass from somebody off-camera, with his eyes fixed firmly on the ball. There’s a plain white background, and you can see his shadow being cast off of the wall behind him.

There’s also a copy of his autograph found on the front, and lots of info about the player found on the back. It’s a stylish option from a unique set, and PSA 10 copies will sell in the low five-figure range. 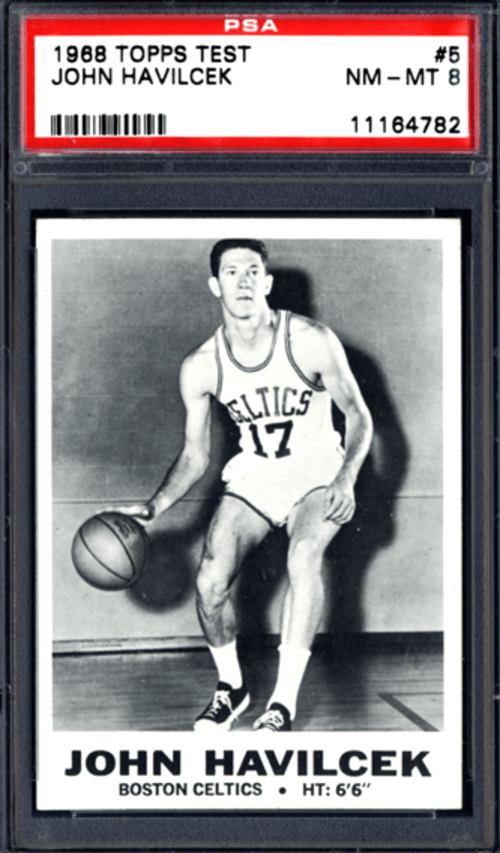 John Havlicek played for 16 seasons with the Boston Celtics, becoming the first player ever to score at least 1,000 points per year for 16 consecutive seasons. He made 13 All-Star appearances and retired with a total of 26,395 points, and eight NBA championships to his name. He passed away in 2019, a few days after his 79th birthday.

As Topps’ first foray into basketball since 1957-58, the 1968 Test issue featured only 22 cards, and it’s highly rated by collectors. The images are black and white, featuring a posed shot of the players, along with their name and the team at the bottom.

Interestingly, they also chose to list height, which is fair considering that we’re looking at some of the biggest men on the planet. Despite being crouched over mid-dribble, a 6’6 Hondo struggles to fit into the frame, and the card is also seen as his RC. 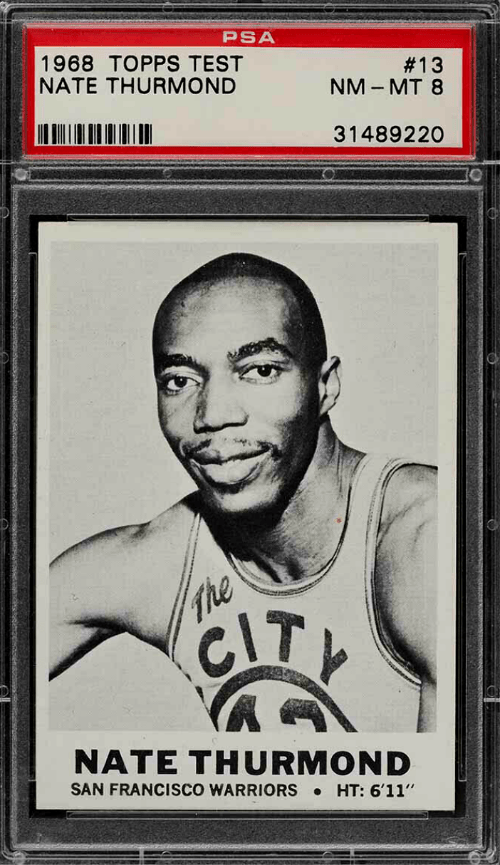 Golden State Warriors legend Nate Thurmond was selected to seven NBA All-Star Games, and two All-Defensive NBA First Teams, and he was the first player in NBA history to register a quadruple-double. He also played for the Chicago Bulls and the Cleveland Cavaliers, while he sadly passed away from Leukemia in 2016.

Thurmond is the second player to feature from the ‘68 Topps Test set, although it’s a slightly different setup to the card seen above. “Nate the Great” is pictured in a close-up profile shot, which makes sense as his height is listed as 6’11. High PSA grades will easily sell for a four-figure fee, although they don’t come up at auction that often. 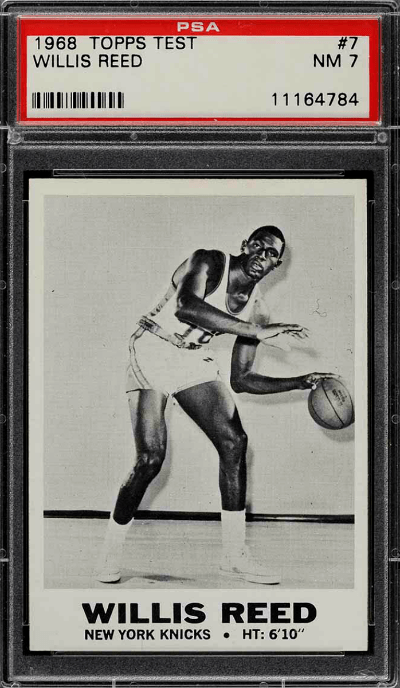 Reed’s 10-year career was cut short by repeated injuries, but he’s well-remembered as the first player in NBA history to be named the NBA All-Star Game Most Valuable Player, the NBA regular season MVP, and the NBA Finals MVP in the same season.

The final Topps Test card on the list features Reed in a posed shot, much like the Havlicek card seen above. However, Reed has one arm raised, as if he’s trying to swat away an invisible defender. It’s a slightly awkward pose, but it’s the only way they could fit the 6’10 giant into the frame. It’s still a crisp shot, and arguably better than many modern-day options.

Before he was Kareem Abdul-Jabbar, he was a young rookie called Lew Alcindor. His ‘69 Topps is what we’re looking at, and you can certainly see the progression in terms of quality throughout the decade.

It’s a unique design, with small cartoons in the four corners, and a large image of Abdul-Jabbar holding a basketball in the middle. His team name (Milwaukee) is found in large red letters at the bottom, while the card has a plain white background. Just like the player himself, the card is oversized, which can lead to flaws in terms of the condition of the edges, especially when compared to normal vintage cards.

As you can see, collectible basketball cards really suffered from the popularity of baseball during the 1960s.

Many manufacturers didn’t bother to make more than a couple of sets, as there just wasn’t a market for them compared to the likes of Willie Mays and Hank Aaron.

However, almost every big star from the ‘60s has at least one card from the decade that can be picked up, while there are RCs for some of the greatest players from the 1970s.

The average player was smaller, and they probably weren’t as skilled as the modern-day star, but there are still a lot of firsts and some records which look like they’ll never be broken.

They might not have been appreciated at the time, but most vintage ‘60s options are worth thousands, especially when looking at higher grades.

The NBA is as popular as it ever was, and the ‘60s sets are also interesting for hobbyists that want to pick up a real piece of sporting history.

They could be a great long-term investment, but it’s also tempting to hold considering their overall quality.