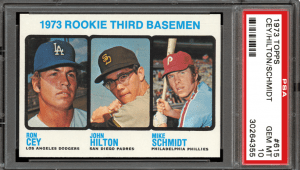 Along with disco dancing and the back end of the Vietnam war, card collecting was a big part of the 1970s. However, most weren’t looked after properly, which means mint editions are often hard to come by.

The 1970s is a decent place to start as a card collector. You don’t have to shell out compared to expensive pre-war sets, and they’re often more interesting than newer options.

We’ve looked through recent sales and auctions to bring you a list with ten of the most valuable 1970’s baseball cards to look out for, along with descriptions of how and why they’re worth so much.

Most are rare rookie cards, or they’re expensively priced because it’s almost impossible to find a copy in gem mint condition.

One of the greatest all-around athletes in history, Dave Winfield earned twelve All-Star selections, and was drafted by four teams in three different sports. PSA 9 versions of Winfield’s 1974 Topps card can easily go for over $500, while a gem mint version went for $9,600 in 2017.

A PSA 7 graded version of Reggie Jackson’s 1971 Topps card recently sold for just $134, while a PSA 8 went for $1,275. The reason for the big difference in price is mostly because of the black background, which is notoriously difficult to find in decent condition. Jackson’s on one knee in the image, with two bats in hand. You’ll also be able to find a signature in black along the bottom of the card.

Nolan “The Ryan Express” Ryan is one of the best power pitchers of all time. His 1975 Topps card is part of a two-tone set in which the corners are notoriously easily to scuff. As for pricing, a PSA 9 went for just over $2,000 late in 2019, while a PSA 10 sold for $31,200 back in 2017. They definitely don’t make cards like this anymore, although that’s probably a good thing considering how difficult they are to look after.

A PSA 9 version of Bobby Bonds’ Topps card can be found in the sub-$100 range, but a grade 10 will easily sell for thousands. A recent example would be a gem mint edition sold on eBay for $2,817 in December 2019. The father of Barry Bonds, they hold the record for most home runs by a father-son combination. Bobby Bonds passed away in 2003.

A player with modest numbers compared to others on this list, Dave Marshall’s 1972 Topps card can normally be grabbed for next to nothing, with a PSA 9 going for $175 early in 2019. However, there are hardly any PSA 10 versions on sale at any given time, so when one recently sold for $3,383, it marked a significant jump in their overall value. The sale also coincided with Marshall’s death in 2019.

Bert Blyleven is a pitcher who ended his career as a two-time All-Star and World Series winner. Blyleven’s card has a black border, so prices begin to go off the charts when you get to higher grades. A PSA 9 went for a round $4,000 late in December 2019. Gem mint versions are even more expensive, and one sold for $15,052 via an online auction in 2012. As with the majority of the others, prices have increased in the last eight years.

This rookie card features three prominent players from the era in Ron Cey, Mike Schmidt and John Hilton. It’s recognised as Schmidt’s only rookie card, which is surprising as he’s one of the best third baseman of all-time. PSA 9 grades can easily go for $3,000, while a 10 recently went for $7,655. The Schmidt factor does make it slightly more appealing to collectors, as well as any Philadelphia Phillies fans. Despite being overlooked for some time, the 1973 rookie third basemen card is worth keeping an eye on.

Yankees catcher Thurman Munson was the 1970 Rookie of the Year, and won two World Series championships. He crashed a private jet while practicing taking off and landing in 1979, ending his career prematurely. It’s hard to find a mint copy, and that’s reflected in the prices at the upper end. While a PSA 10 sold for just over $13,000 in 2012, the amount jumped to $26,101 after a 2018 eBay auction. From his tragic death to his expensive cards, Munson is certainly one of the more interesting players from the era.