‘80s hockey was exciting. Statistically, players were scoring at unseen rates, while most goaltenders had yet to perfect the profile style popularised by Patrick Roy. The talents of Wayne Gretzky were on display at the other end, while the ‘Miracle on Ice’ captured national attention in the wake of rising Cold War tensions between Russia and the US.

As such, the decade is remembered fondly by hockey fans, with some of the best options being noticeably more valuable than cards that came out in the decades that followed. Despite many of these hockey cards being released during the junk wax era, you’d be surprised to see some of the prices that the best ‘80s options can sell for.

Here are several of the most expensive hockey cards from the 1980s, with lots of info about the player, and the cards themselves.

The Most Expensive ‘80s Hockey Cards

Yearly O-Pee-Chee (OPC) and Topps Hockey sets were dominant at the time, although you won’t find any signed cards or parallels which are so popular today. Back in the ‘80s, you were lucky to have more than a couple of options each year, although print runs were massive.

Topps and OPC cards typically feature the same image, the only difference being branding on the front and a bilingual bonus for the latter. (In many years, OPC cards also had smaller print runs.)

They’re all pretty similar in design, with basic action shots and a lack of risks taken. Six of the seven are rookie cards, while the other features one of the greatest players that the game has ever seen. They are all long retired, but it’s still a who’s who of the decade’s best.

It’s also worth mentioning that most of the cards we’re discussing are close to entering their 40th year of existence. This means you’ll have to be wary when checking out the condition, as most have taken a ding or two along the way.

For this list, we’ll look at gem mint copies to find the most expensive hockey cards from the 1980s. There’s a massive drop-off from PSA 10 to 9 grades, so they’re easy to pick up if you want to add any version of a card to your collection. 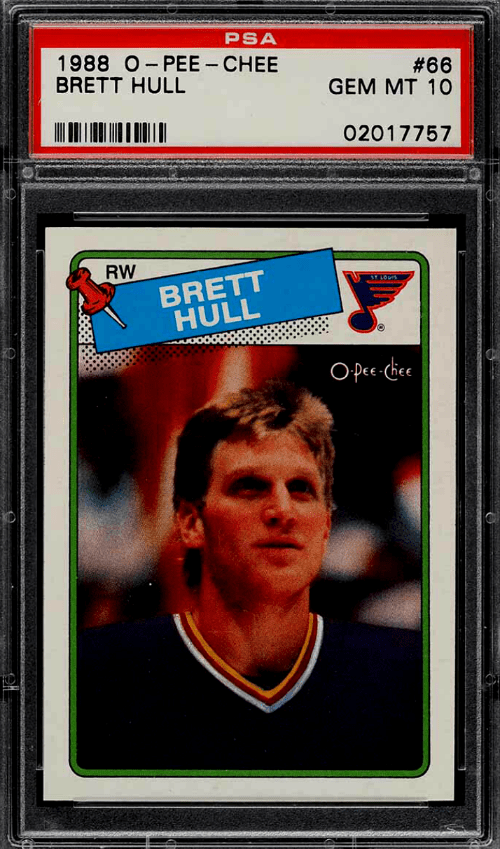 His OPC rookie card is the first to make it onto our list. It comes with a white and green border, along with a pin design for his name at the top. The lower two-thirds of the card have a zoomed-in profile shot of the player, although it does look like it was taken on a camera phone from the mid-2000s. However, that hasn’t stopped prices for PSA 10 versions from rising in recent months.

Despite playing for 19 seasons in the NHL, Mike Gartner never won the Stanley Cup or played in the Cup Finals, never earned an NHL award, and was never made the postseason All-Star Team. He still managed to make it into the Hall of Fame and holds several leagues and franchise records thanks to his unerring consistency.

His 1980 RC probably has the cleanest photo on the list, with an image of the right-wing standing on the ice. It’s framed well, with Gartner staring off into the distance with a stick loosely held in his hands. It has a pink border, while his position is listed as ‘right-wing’, or ‘ailier droit’.

Detroit Red Wings legend Steve Yzerman led the team to five first-place season finishes and three Stanley Cup championships (1997, 1998 and 2002), and rejoined the team as GM in 2019. Yzerman’s RC is a must-have for any serious Red Wings fan.

His OPC card features a strong action shot of the player on the ice and a second profile image located in a circle at the bottom. It’s seen as the best card in the 1984 set, while it’s also the most expensive by a fair margin.

It’s time to talk about the GOAT. When Wayne Gretzky retired in 1991, he held 61 NHL records, broken down to 40 regular-season records, 15 playoff records, and 6 All-Star records. He’s widely credited with popularising the sport in Canada, while he won four Stanley Cup championships with the Oilers (1984-1985, 1987-1988) over the decade. ‘80s hockey wouldn’t be the same without Gretzky.

Released just one year after his legendary RC, Gretzky’s 1980 OPC is still worth a fair amount. It has a white and green border, with an image of the center moving quickly on the ice. No French text is found on the front, but the back is bilingual. Even a PSA 8 grade of his ‘79 OPC RC is worth multiple times more than this card, but when it comes to the ‘80s, this is one of the better Gretzky cards you’ll find.

Despite several health issues that plagued Mario Lemieux throughout his career, he still managed to lead Pittsburgh to consecutive Stanley Cup championships in 1991 and 1992. After his first retirement in 2000, he returned to become their player/owner, retiring for a second time after the 2006 season. The current Penguins owner, they’ve won recent titles in 2009, 2016, and 2017. This makes him the only person to have his name on the Cup as a player and owner.

His RC is a must-have for any Penguins fans, featuring a large shot of the player staring off moodily while on the ice. It has a plain white border, but there’s a large indent in the top right corner to allow for a team logo. His name is found at the bottom, in a yellow block with black text that matches his jersey. PSA 10 copies are worth a fair amount, so it’s another card that should be on your radar.

Seen as the greatest goaltender of all-time, Patrick Roy won four Stanley Cups during his career, earning two apiece with the Montreal Canadiens and the Colorado Avalanche respectively. Roy is an icon in the sport, while he’s the only player in NHL history to win the Conn Smythe Trophy three times. His records and accomplishments are endless, and his RC is one of the best you’ll find if you’re looking for the most expensive ‘80s options.

The card has a nice red, white and blue border, with an action shot of Roy preparing to make a save. There’s a large Canadiens logo located on the bottom right corner, while there’s an O-Pee-Chee emblem found diagonally opposite. It’s one of the more recognizable hockey cards from the decade and sells for a decent price as collectors pay homage to one of the greats.

Heading back to 1980, Mark Messier is a six-time Stanley Cup champion, winning five with the Oilers and one with the Rangers. The Messiah is the only player to captain two teams to Stanley Cup championships, while he holds a number of league records. It’s unsurprising to learn that his RC is one of the better options from the decade, even if Messier was sometimes left in Gretzky’s shadow.

There’s a white and green border, with his team name (Oilers) and position found at the bottom. The large action shot shows Messier on the ice, holding a stick sideways as he keeps his eyes on the puck. The fact that it’s Messier’s only recognized mainstream rookie card certainly helps to drive attention and keeps prices trending upwards, as the player is absent from the 1980 Topps set since its checklist of 264 cards was much smaller than the OPC release.

AS OPC print runs were often smaller, and it’s now 40 years old, it’s one of the rarest cards on the list. Messier’s RC is probably the most expensive hockey card from the ‘80s, so he gets to step out of Gretzky’s shadow in at least one respect.