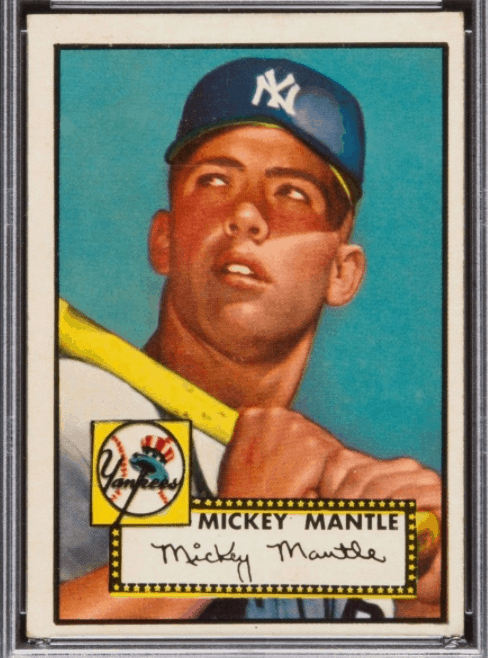 Picture this. You’re 11 years old. You’ve been anxiously waiting for new sets of sports cards to hit the stores. You’re excited to add them to your collection and trade them. You head to the store and see that they don’t cost much and it makes for a fun hobby for you to share with your friends. The guy at the counter tells you to pick wisely because some of these could be worth hundreds of thousands of dollars in the future.

Do you believe him?

Probably not. Your 11-year-old brain can’t process why a small piece of cardboard could be worth thousands of dollars. For you, it’s just a fun hobby to share with your buddies.

Shop for rare, vintage, and modern sports cards on eBay!

And yet, that’s exactly what has happened. Over time, the value of these cards has skyrocketed. Some cards are even valued at over $1 million dollars now.

Of course, you would have had to be extremely lucky to have picked one of these because 99% of all cards end up with little to no value. But that hasn’t stopped people from minting money by trading cards. In fact, trading sports cards has become a serious form of alternate investing. It’s no longer just a kids hobby.

Before I show you the 5 most expensive baseball cards ever sold, let’s go over the 3 things that determine their price:

5 Most Expensive Baseball Cards Ever Sold 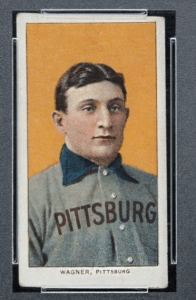 A PSA 5 T206 Wagner sold for an industry-record $3.12 million in 2016. That’s the most anyone’s ever paid for a baseball card – beating the previous record of $2.8 million dollars.

This is the top condition copy of the card, making it the “Jumbo Wagner.” There are also less than 60 total copies of this card known.

But the real reason behind this card isn’t in its scarcity or its condition. Its value lies in its unique history. This card was produced by the American Tobacco Company between 1909 and 1911 as a marketing campaign. But production was cut short due to a dispute between Wagner and the company.

No one really knows why. Some say it’s because Wagner didn’t want his name to be associated to selling tobacco and he didn’t want kids going around buying cigarettes just to get a copy of his card.

Others speculate that the reasons were more selfish – Wagner wanted to get a cut from the company for using his name and reputation to sell the card. When that didn’t happen, he demanded the production to be stopped

Regardless, it led to the card being printed considerably lesser than its counterparts. And that has made its value go sky high.

Of course, that also means that several duplicate cards have surfaced in recent years and have been the cause of a lot of controversy and speculation.

If you’re ever in the market for this card, or any of the cards that are this expensive, it’s always recommended that you double-check its authenticity. 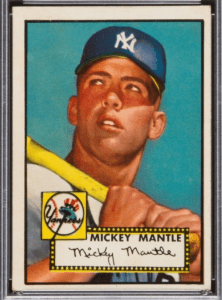 It’s no surprise that the Topps Mantle made it to this list. It has been widely hyped in the baseball card circles for decades.

But don’t be mistaken, this card wasn’t always worth big bucks.

In fact, back in the late 1950s this card was cause for worry for Sy Burger of Topps. Despite trying hard to sell off as much of this card as possible, he’d reached a point where he was barely able to sell the card for a penny apiece. Soon, it got so bad that he resorted to selling 10 cards for a penny.

He was tired of the card blocking space in his Brooklyn warehouse. So he took matters into his own hands.

“They were put in boxes,” he recalled in an interview. “It took three garbage trucks. I would say 300-500 cases. All high series of 1952 Topps. I found a friend who had a garbage scow and we loaded three trucks-worth on the barge. I was out there with it a few miles out.”

These cases were then dumped into the Atlantic Ocean.

Considering that, it’s a miracle that this card survived at all. And it’s even more surprising that it survived in such mint condition. 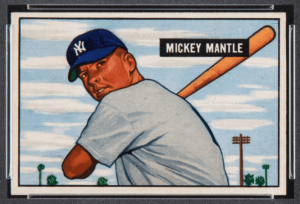 Yet another Mantle card makes it onto the list.

This card is also speculated to be undervalued by experts, making it an attractive investment opportunity. 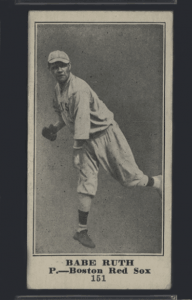 It shouldn’t shock you that a Babe Ruth card has become insanely valuable today. He was considered a legend in his time. A PSA 7 1916 Sporting News Babe Ruth sold in August 2016 for $717,000.

This card has an interesting history behind it too.

Initially, it was printed by a Chicago based printer Felix Mendelsohn. Felix’s idea was to print sports cards on one side and leave the back of the card blank, allowing businesses to print their own advertising in this space.

It was an interesting marketing gimmick and attracted 16 businesses. 200 different sports cards were printed in this manner, but the Babe Ruth card turned out to be the most valuable. Many consider this to be his rookie card. 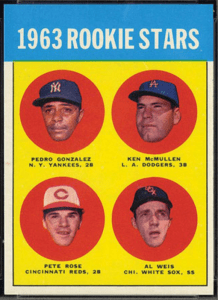 Although 3,711 of these cards have been graded by PSA, this one stood out because it’s the only one to have been graded as “Gem Mint.” That just goes to show how important the condition of the card is in determining its value.

This card remains as popular as ever despite Pete Rose’s lifetime ban from baseball. Rose voluntarily accepted a ban because of gambling allegations. He accepted the allegations were factual and in exchange, Major League Baseball agreed not to conduct any formal finding.

You can’t call that a win-win, of course, but this controversy hasn’t impacted the price of his rookie card. He’s still as popular as ever.

As you can tell, there’s a ton of potential to make money in baseball card investing.

In fact, it could even give you double the returns as compared to the stock markets.

But you have to realize that these are the “outliers.”

Not every investment is going to fetch you hundreds of thousands of dollars. You might even end up losing money on some cards. But the moment you get just one big winner, it’s going to pay for all the losing cards and a lot more.

If you’re considering investing in sports cards, you have to take it as seriously as investing in anything else.

To get you started, we’ve put together a handy little guide that’s going to take you through the best investing options in this industry. Some of these are seriously undervalued and could give you exactly the kind of gains you’re looking for.

Feel free to go through the list and find a card you like. You can also find the reports we’ve written about individual cards in our archive. We regularly cover interesting cards in detail.

1 thought on “5 Most Expensive Baseball Cards Ever Sold (Updated)”