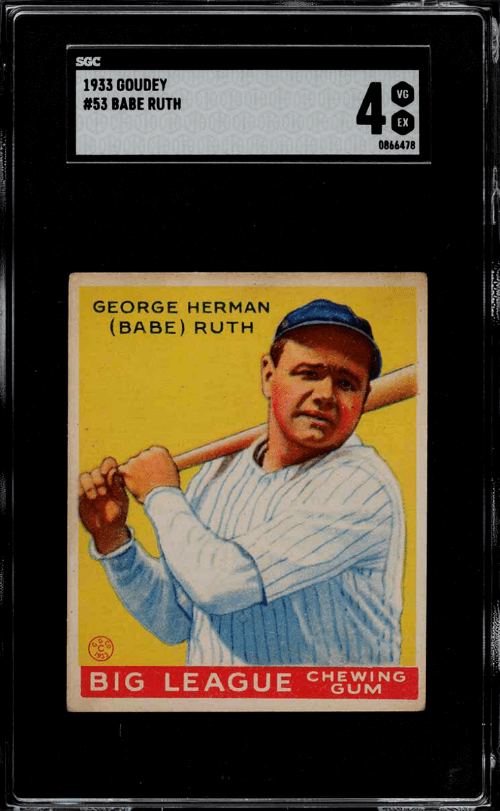 The 1930s is one of the greatest eras if you’re looking at pre-war collectibles. Baseball cards feature some of the biggest names in the hobby, and expensive options are plentiful.

Ty Cobb might have retired in ‘28, but Babe Ruth was still hitting homers in the early 1930s, while a new generation was able to build on the strong foundations left by some of the bigger stars of yesteryear.

Here’s a rundown with seven of the most expensive baseball cards from the 1930s, including player and set info, and how and why their options have made it onto the list.

The Most Expensive ‘30s Baseball Cards

Pre-war nostalgia is high at the moment, fueled by collectors yearning for simpler times. Babe Ruth does feature heavily, but there are a number of different players who manage to make it.

The 1930s are certainly a great decade if you’re interested in real vintage cards. As we’re looking at the most expensive options from the ‘30s, Goudey releases feature heavily on the list. After all, Topps didn’t exist yet, while Bowman sets are nowhere near as popular with collectors.

Related: Most Valuable Football Cards from the 1990s

We’ll also be looking at the highest PSA versions, as they are the preferred grading service for vintage cards. The higher the number, the more valuable the card, and they had to get through WW2 to be here with us today.

Many of the cards were cut to increase their aesthetic appeal, so they can come in slightly different shapes or sizes, while you’ll have to be wary in terms of fakes and forgeries, as there’s a large market for counterfeit goods if you’re not careful. 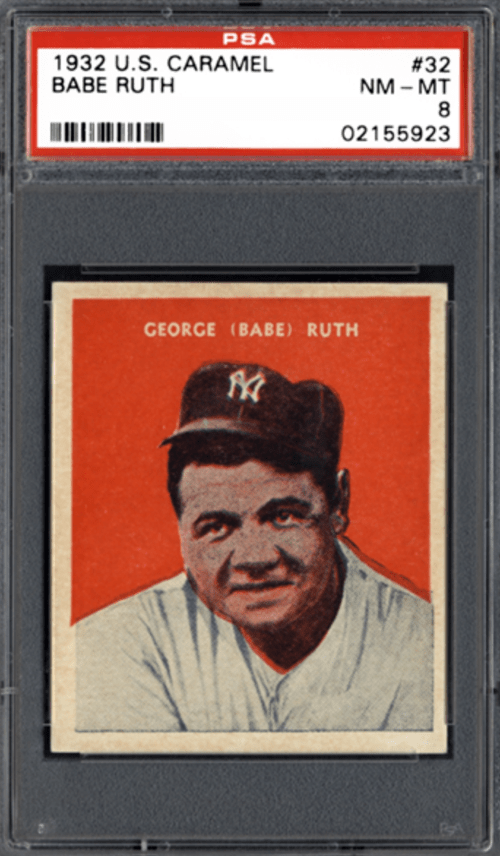 Arguably the biggest name in the history of the sport, Babe Ruth went on to break baseball’s most important slugging records, including the most years leading a league in home runs, the most total bases in a season, and the highest slugging percentage for a season.

A seven-time World Series champion in three different decades, his achievements are arguably second to his charisma and branding, which helped to carry his legacy over a century after he was born.

The first Babe Ruth card to make it onto the list comes from the tail end of his career, while it’s also one of the last sets issued with caramel products before the arrival of gum cards in later years.

The card has a deep red background and an iconic profile shot of Ruth in his Yankees hat, while his name is listed as ‘George (Babe) Ruth’. There’s a thick white border, while his crumpled Yankees hat is tilted to one side. 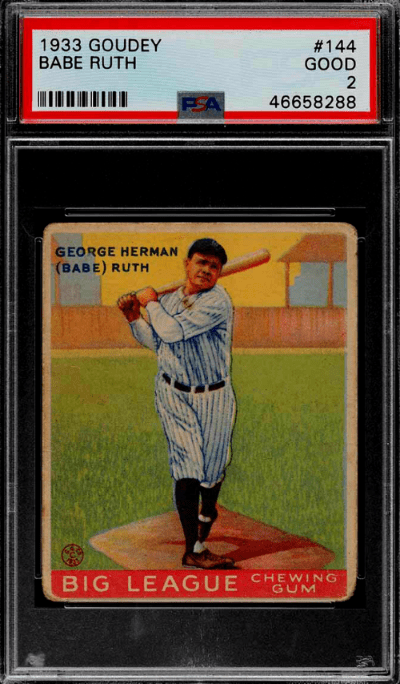 1933 was a strong year for Ruth releases, while the player was still going strong for the Yankees. He hit the first home run in the All-Star Game’s history, while The Sultan of Swat is pictured on four different cards from the Goudey set of that year; #53, #144, #149 and #181. Three manage to make it onto the list, and this is the first of the trio.

Another iconic card, the ‘33 Goudey (#53) features a simple illustration of the player in a strong pose, as he waits at the plate with a bat slung over his shoulder. The bright yellow background immediately catches the eye, while it lists his full name. You’ll find a box at the bottom which has a red and white border that reads; ‘Big League Chewing Gum’.

It’s arguably more recognizable than any real image of Ruth, and the #149 is a carbon-copy, aside from opting for a red background instead of the yellow. The quartet of his 1933 cards are always popular with collectors, but they are some of the most valuable baseball cards from the decade.

Numbered #144, this is the second 1933 Goudey Babe Ruth card to make it onto the list. It features another legendary image of the player, as Ruth stands ready on the plate with a bat held over his shoulder. If you look really closely, you’ll be able to spot that the card listed above is simply a close-up shot of the image shown here, right down to the yellow background behind Ruth’s head.

There’s certainly more detail compared to the average card from the set, but it’s not particularly rare. Despite being a more interesting card overall, the #144 (or Full Body Ruth) was double-printed and is more plentiful than the others, but that hasn’t stopped a PSA 9 grade from selling for just over $500,000 in January 2019.

The #106 card (Napoleon Lajoie) was left off the printing sheet, so Ruth’s card #144 was printed in place of it. There are some slight differences between the two versions, with one version looking clearer due to sharper focus. However, there’s no real difference in terms of price, so it’s more dependent on the overall grade. 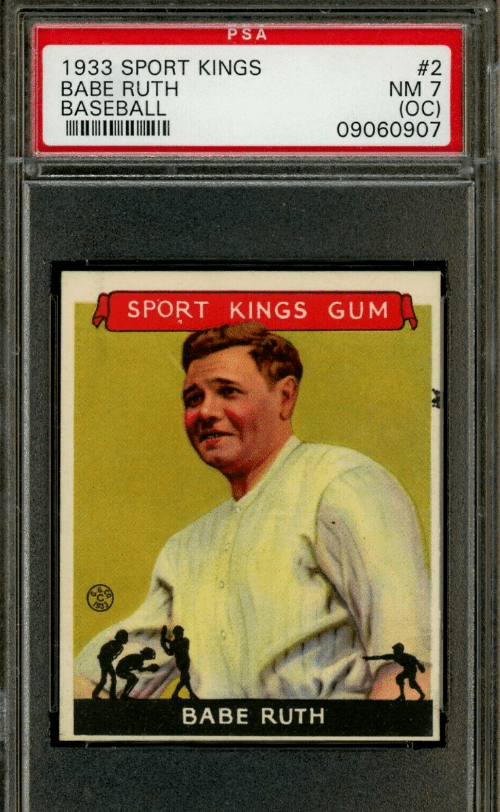 The last of the 1933 Ruth cards to make our list, it was only a year before weight/substance abuse issues caused his inevitable decline, as he could no longer move quickly enough to have any real impact on proceedings. It was a sad end for one of the GOAT candidates, but his legacy lives on, and he did it all without steroids, unlike many of the greatest players from later decades.

Trending: Most Valuable Basketball Cards From The ’90s

Officially designated as R338, there are 48 cards in the 1933 Sport Kings set, and just three are baseball players. Babe Ruth, Ty Cobb, and Carl Hubbell make up the trio, and Ruth’s version is the most valuable.

The card features another profile shot of Ruth, staring off to the side with a strong mustard-colored background. There’s a red banner at the top that reads; ‘Sports Kings Gum’, while a black border at the bottom lists his name in white writing.

In a nice touch, there are baseball silhouettes found above the player name, giving collectors something interesting to look at along with the main image of Ruth. 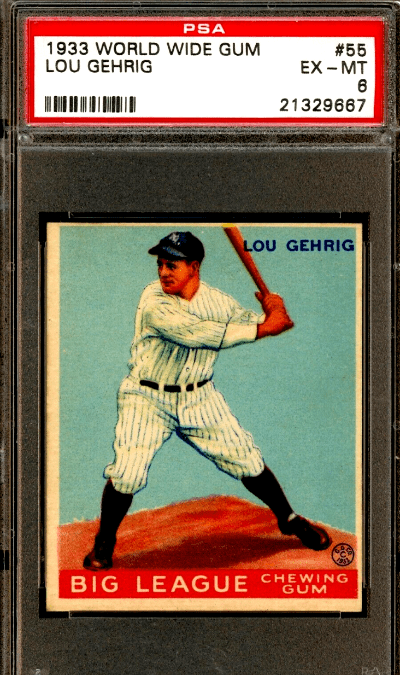 Lou Gehrig is another celebrated Yankees legend. The first baseman played for 17 seasons in New York, ending his career as a six-time World Series champion. He was an All-Star seven consecutive times, while his durability earned him the nickname; ‘The Iron Horse’. ALS (or Lou Gehrig’s disease) caused him to abruptly retire at the age of 36, and he died just two years later.

We’re still sticking with the 1933 Goudey set for now. Gehrig had just won the World Series in ‘32, while he was about to start a run of several All-Star appearances in a row. The card features him standing at the plate, with a bat primed as he readies his stance. An extremely basic background has a light blue sky, with a separate red blob making up the floor. His name is found at the top in dark blue text, while the bottom has a red and white border that reads; ‘Big League Chewing Gum’.

His untimely passing means that there aren’t many Gehrig cards on the market, while earlier releases are always favored by collectors. 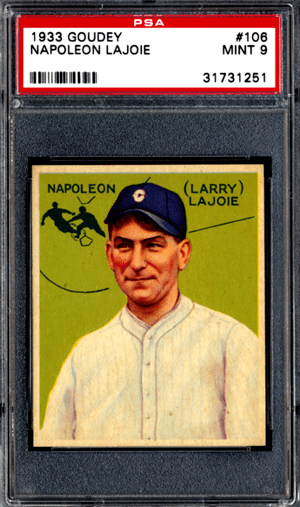 A five-time AL batting champion, and a Triple Crown winner way back in 1901, Napoleon Lajoie had a fierce rivalry with Ty Cobb as they vied to be the undisputed star of the era during the turn of the century. Regardless, Lajoie is nowhere near as popular or as successful as the other players to make it onto this list, so what’s so special about his 1933 card?

Despite the year of release, we’ve mentioned that this card wasn’t included in the original 1933 Goudey set. Instead, in 1934, collectors had to acquire the card directly from the manufacturer in order to complete the set. It was sent through the mail to the collectors who contacted the Goudey company, and it means that it’s now almost as valuable as any of the popular Ruth cards.

Read Next: Most Popular Topps Baseball Cards of All-Time

It features a profile image of Lajoie, with a light green background. You can tell it’s a later release compared to the other ‘33 Goudey cards due to the style, while it’s easier to find higher grades as it wasn’t released into the wild. Only dedicated collectors bothered to contact the manufacturer, so it might be nicer than the average card from ‘33, but it’s also substantially rarer. 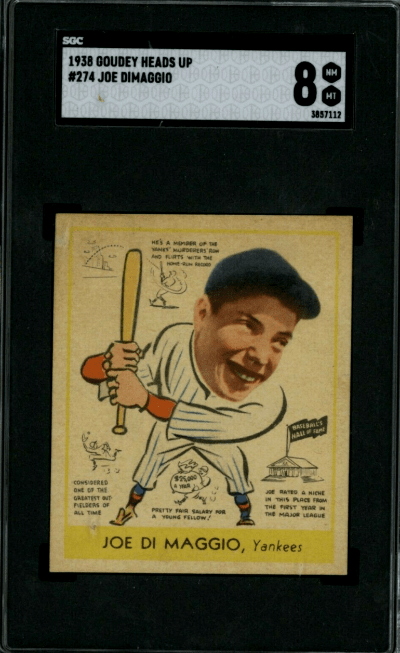 Joe DiMaggio was a Yankees legend who spent 13 seasons with the team, going on to become one of the greatest players the game has ever seen. He was a three-time MVP winner and an All-Star in each of his 13 seasons, and his total of nine career World Series rings is second only to fellow Yankee Yogi Berra, who earned ten.

As the mainstream rookie issue of Joltin’ Joe, there were actually two cards released in the ‘38 Goudey set. The first, #250 (without cartoons) and #274 (with cartoons). The latter is what we’re looking at here, as it features a large doodle of DiMaggio, with a cartoonish body holding a bat in two hands, and a large photo of his face pasted over the top.

DiMaggio is surrounded by small drawings, including one that shows a player holding a bag of money that says ‘$25,000 per year’. It notes that the amount is a “pretty fair salary for a young fellow”, so the card is pretty cool if you like throwback memorabilia. There’s also a yellow border that leads into the team name, and player info which is found at the bottom.

Even a PSA 1 will easily sell for four-figures, so any copy is pretty expensive!