As with most sports, smart soccer card investors embrace the new (Messi, Ronaldo) and the old (Pele, Zidane) to diversify their portfolios, decrease risk, and increase returns. If you have any questions in regards to this list email us at info@goldcardauctions.com.

Soccer, the Beautiful Game, has blossomed into a promising arena for collectors and investors alike. We feel hockey and soccer (futbol) cards are undervalued in the long term as both sports have room for growth in the US.

The NHL has recently signed a 7-year multiplatform contract with ESPN while the MLS is expanding faster than Charles Barkley’s pant size.

10 Most Valuable Soccer Cards of All-Time 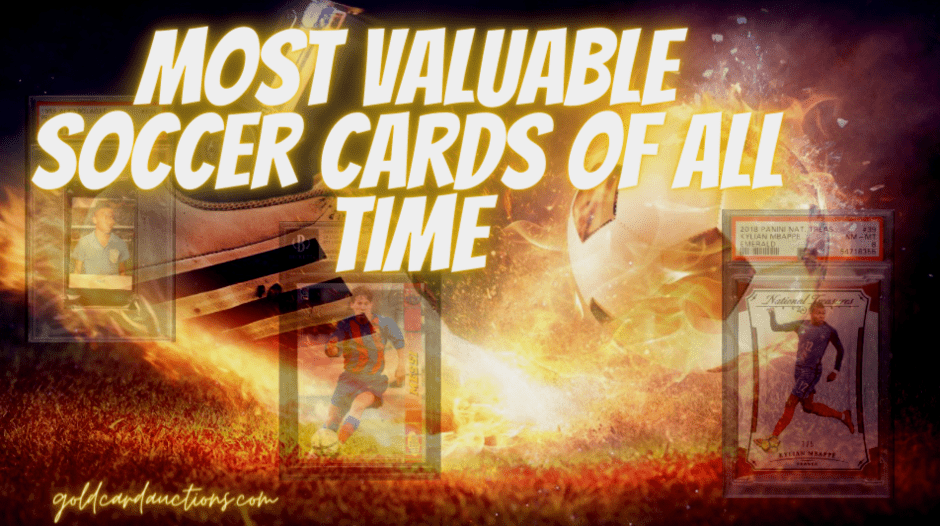 Let’s take a look at the most valuable soccer cards in the world. These cards and players are moving the needle (shifting the pitch, if you will) in the collecting community.

Be sure to stick around for the end as we provide our top picks in terms of ROI. 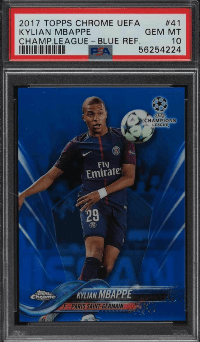 Back for the third time, we have the 2017 Kylian Mbappe Topps Chrome UEFA Champions League RC #41.

A true Mbappe rookie card, it features the young striker in a navy Paris-St. Germain kit. He chips the star-studded ball skyward, mouth open as he exerts his focus on the ball’s path.

The nameplate at the bottom is ultra-modern, with italicized, multi-sized font and water-like accents. The Topps Chrome logo sneaks into the card’s bottom-left frame.

What does it say that Mbappe appears three times on this list? It shows the potential of a World Cup to catapult those who perform well to stardom.

Having a name as fun to say as “Mbappe” certainly doesn’t hurt one’s Q score, either. 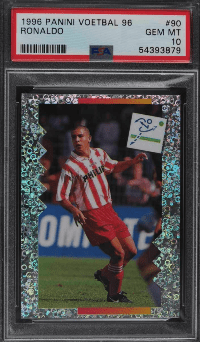 Before (Cristiano) Ronaldo, there was just Ronaldo. The legendary Brazilian striker lost some of his virtuosity as he ballooned in weight late in his career, but his rookie card remains among soccer’s premier memorabilia.

Even by 1995 standards, it’s a pared-down card. It features only a mayo-mustard colored team plate atop Ronaldo’s image, a white-and-orange nameplate beneath it, Ronaldo’s picture, and a cartoon soccer player emblem. That’s all, folks.

The card’s got character, though, featuring a wild-toothed Ronaldo during his tenure with the Danish club Philips Sport Vereniging (PSV).

Ronaldo wears a red-and-white striped and collared kit with a folded Adidas logo at the breast bone.

He sports an ear-to-ear grin befitting of a young kid being paid to play the game that he loves, having dropped out of school to play all day in the streets of a Rio suburb.

You could easily convince me that you made this card using Photoshop. It’s not me that matters, though. It’s sellers and buyers who matter, and they’ve ascribed a high value to this card.

Those who remember Luis Nazario De Lima Ronaldo balling in his prime won’t be surprised that this card makes the cut. He was an inspiration for younger Brazilian superstars who now have their own impressive rookie cards. 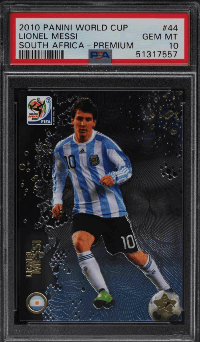 Lionel Messi is so nice with the ball that we couldn’t help but list him twice. His second entry is the 2010 Lionel Messi Panini World Cup South Africa Premium #44.

It doesn’t matter that La Albicileste came up short of the Cup in 2010, this card is a winner.

It shows Messi in his iconic white and blue striped Argentine national team kit, either having just sent a pass or awaiting imminent arrival.

He stares at the incoming (or outgoing) ball, which sits in the card’s bottom right corner.

The card’s backdrop is a standout feature, radiating a blue-silver sheen amidst carefully styled embossing and indentations.

A 2010 World Cup logo commemorates the South African tournament and adds a unique flair to the card. Though generally less expensive than Messi rookie cards, it’s one of the standouts in the Messi card pantheon. 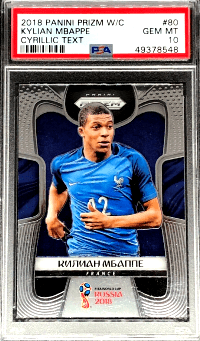 Kylian Mbappe’s star exploded as a result of France’s 2018 World Cup win, and the value of his cards has continued to climb as he continues to forge his professional mark.

The 2018 Kylian Mbappe Panini Prizm Soccer World Cup RC #80 immortalizes the striker’s brilliance in that World Cup. It features him in the form-fitting Les Bleus kit.

Mbappe jogs nonchalantly with a look of amusement on his teenaged face. A butterfly-shaped blue backdrop frames his image. Two mirrored plateaus reside on either side. The card’s border is reflective silver.

A “Kylian Mbappe, France” nameplate balances atop a “Russia 2018” FIFA emblem on the card’s bottom portion.

It’s a relaxed card that commemorates all that Mbappe accomplished before reaching the legal U.S. drinking age. One more thing: it’s expensive. 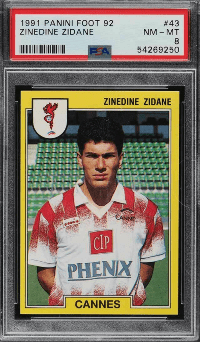 The 1991 Zinedine Zidane Panini Foot ’92 RC #43 is proof that style isn’t everything. Though it is a bare-bones card in terms of design, it’s quite valuable.

Primarily because it’s a Zinedine Zidane rookie card. The French midfielder is referred to as a soccer “God” and “Master”, and his rookie card will always be a hot item.

Let’s be serious: we know this card isn’t an all-timer because of its visual appeal. Even Zidane looks disgusted to be on the card, scowling (though the sun likely played a role in the furrowed brow) in a red and white striped Cannes kit.

The rest of the card is…yellow. A yellow border reads “Zinedine Zidane” in black font up top and “Cannes” in matching font down low.

The upper left corner bears an Association Sportive de Cannes Football logo. It’s not much, but collectors maketh the card’s value. In this case, they don’t mind the crude design.

This card stands out value-wise from the collection of Zidane rookie cards. It stands out among the entire pool of soccer cards, for that matter. 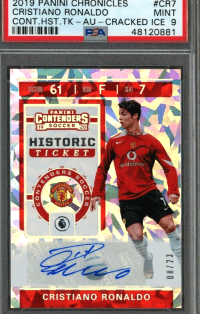 The list of the most valuable soccer cards features a healthy blend of old and new, and the Cristiano Ronaldo Panini Chronicles “Contenders Historic Ticket” #CR7 is a representative from the new school.

Though produced in 2019, the card commemorates the six evolutionary seasons Ronaldo spent with Man Utd.

The base card features a white backdrop and has the layout of a match ticket. Up top is a banner that reads “Section 61 Row F Seat 7”, surely a nod to Ronaldo’s #7 jersey.

Ronaldo’s blue signature occupies the lower portion of the card, signed on a translucent plate behind which a soccer ball can be seen.

An image of Ronaldo in his red Vodafone-sponsored Man U. kit features prominently on the card’s right side. It is not, however, the focal point of the card (as player images typically are).

This is one of the busier but well-balanced cards that you’ll find in soccer cards’ top tier. Cracked Ice (/23) and Championship (1/1) add additional flair and rarity to the base card. 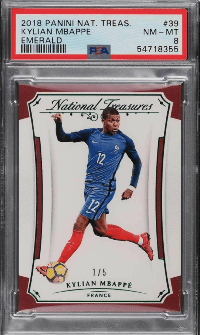 Accordingly, his cards rank among the highest-priced in the sports card universe. The 2018 Kylian Mbappe National Treasures RC Soccer #39 is a particularly notable item.

The card features Mbappe in his long-sleeved Les Bleus blues, a #12 occupying both his chest and short leg. Red socks and cleats create a pleasing contrast while matching the card’s dark red accents.

A gold, cursive “National Treasures” banner is atop, while a stacked “Kylian Mbappe, France” nameplate is parallel to the card’s bottom border.

Known as a premier product, National Treasures carry a hefty price tag as a general rule. Even so, this card is exceptional. It’s one of the Kylian Mbappe rookie cards that you want to target. 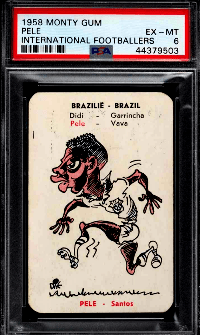 In today’s edition of “Cards That Could Never Be Printed Today”, we have the 1958 Pelé Monty Gum International Footballers RC.

The card features a caricature of Pelé that, by today’s standards, would be considered unacceptable. However, this card does exist, and it remains in high demand.

Monty Gum designed the Red Back version of this card as a playing card. It has rounded edges and black Ace of Clubs emblems in each corner. A cartoon rendition of Pelé leaps in the air, wearing a white uniform with a crude version of the Brazil national team logo.

Above those names, the card reads “Brazilie – Brazil”.

The Red Back version features no names up top, but a “Brazil – Le Bresil” and “Pele” nameplate on the card’s bottom. Racially charged cartoon aside, it’s an iconic card design.

According to PSA, both the Green Back and Red Back versions of this card are in short supply—particularly when it comes to copies graded 7, 8, or higher 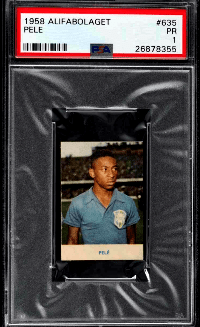 The name “Pelé” occupies rarified air shared by other one-namers like Jordan, Ruth, and Gretzky. These are the names collectors covet most.

Any collector pursuing the top-shelf Pelé rookie card is looking for the 1958 Pelé Alifabolaget #635.

Produced in Sweden in 1958, the card features a 17-year-old Pelé wearing a collared blue Brazilian national team kit with an oversized logo on the left breast.

The photograph of the camera-wary Pelé is pretty much the sum of this card. The only other feature is a white bottom nameplate with “Pelé” printed in hyper-plain blue font that matches the youngster’s jersey.

Brazil’s Pelé-led victory in the 1958 World Cup only heightens this card’s historical significance…and its price.

The card’s track record of returns compares favorably to even the top soccer cards of the modern era. 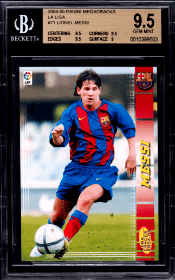 Lionel Messi is the highest-paid soccer player in the world, earning over $100 million per year. Doesn’t it make sense that his 2004 Panini Mega Cracks #71 would be a similarly expensive asset?

Yes, yes it does. Considered a Messi rookie card, it ranks among the .001% of soccer cards.

Even with no autograph, collectors have proven willing to part with near-generational money just to own this card.

It features Messi in his Barca blue and reds, controlling the ball on his white cleats with expert precision. The pint-sized Messi’s blue sleeves have overtaken his elbows.

Trending: How to make money investing in sports cards

The card’s design is common fare, with a vertical red-and-white nameplate running up the right border. That plate leads into a Barca logo up top and a “Mega Cracks 2004” emblem down low.

A Liga Nacional de Futbol (LFP) logo hides in the upper-lefthand corner. PSA documents average sale prices for each grade of this card. A small pool of Mint and Gem Mint copies contributes to strong prices.

Though card collecting isn’t a purely American phenomenon (not by a long shot), it never helps to have the American audience on board for any movement.

That’s why soccer’s increasing popularity in the States is a positive development for those with a vested interest in soccer cards.

Whether you own a premier card featuring the likes of Messi, Mbappe, or Zidane, or you are a more blue-collar collector, the hope is that soccer’s general rise will translate to higher prices.

A sport’s popularity is one of the factors that can cause cards’ values to surge or fall, and this is a positive indicator when it comes to soccer.

That said, soccer fans are star-hungry, as are fans of most sports. While top dogs like Ronaldo and legends like Pelé may fetch top-dollar, the market for non-superstars will likely remain cold.