Nobody epitomizes the larger-than-life trope better than Shaquille O’Neal. Destined to be a star before he was drafted, Shaq arrived as a 7-foot-1 phenom out of LSU and played for six teams in his 19-year career.

Best known for his time with the Miami Heat and the Los Angeles Lakers, he earned three of his four titles and a trio of Finals MVP awards with the latter.

He is also known as; Shaq, Diesel, The Big Aristotle, Superman, Shaq Fu, and our favorite, ‘Shaq Daddy’. We’ve listed 12 of the most valuable Shaq cards below, along with the number one overall in terms of value and our top investment pick.

A mix of rookie cards, autos, and rare inserts manage to make the list of the 12 most valuable Shaq cards to keep an eye out for. As always, the highest values are tied to pristine grades from the likes of PSA or BGS.

It eliminates the risk of buying fakes or inferior copies and indicates what the card is likely to sell for in the future. We’ve listed the cards in order, starting with a great option from the late 1990s. 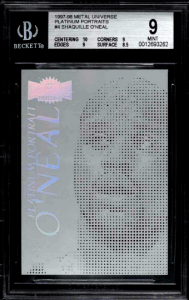 The 1997-98 Skybox Metal Universe Basketball set is best known for the rare Precious Metal Gems cards, which do make an appearance below. However, the first spot on this list is reserved for the SP Platinum Portrait insert, featuring a great image of Shaq and a unique design.

There’s a silver background, with a series of holes used to form a profile image on the right side. A full-bleed card, the lack of a hard border, and the numerous holes make it difficult to find in mint condition. 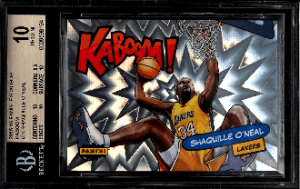 The Kaboom! insert is always popular, no matter the player or the sport. Shaq’s best card is found in the 2015-16 Panini Excalibur Basketball release, which dropped at a rate of one insert per box. It features a silver chrome background, with a stylized image of the big man as he leaps up to dunk in a classic Lakers jersey.

Leaning into the comic motif, his name and team are included in a speech bubble at the bottom, and there’s a large ‘Kaboom’ logo in the background. It’s the most recent release to make the list, and there’s a similar Shaq Kaboom! The card came out in 2018. The nameplate is found on the left with the 2018 version. 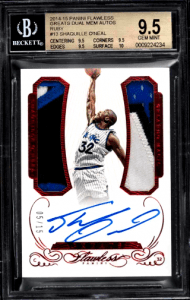 With a base version numbered just 25 copies, Shaq’s Dual Memorabilia Autographs card is another rarity. It contains everything you could possibly ask for from a collectible card, with two large patches set aside with an image of the player leaping towards the sky in his Magic jersey.

At the bottom, you’ll find a large on-card auto, signed in blue ink against a white backdrop. It’s a typical understated Flawless design, with four further parallels numbered 15 or less. 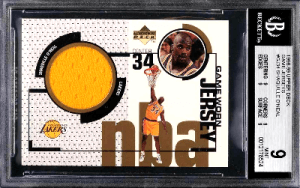 Originally inserted in both hobby and retail packs at a rate of one in 2,500, the 1998 Upper Deck Game Jersey is a great piece of vintage Shaq memorabilia that is rarer than you might have expected.

Just three have managed to achieve an elusive PSA 10 grade, which makes sense given the perforated left-hand side which also contains a game-worn patch from the 1997-98 season.

The lack of an auto might be off-putting for some serious collectors, but there’s no denying that gem mint copies are rarer than almost any other Shaq card on the market.

There are various Shaq patches on the market, but few can match up to the ‘98 UD card that focuses on his time with the Lakers. 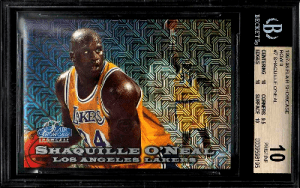 The 1997 Flair Showcase subset was part of a hobby-exclusive offering with various rare parallels to search for. There are three rows containing cards for each player, the most important of which is Row 0, which has the rarest versions found in the set.

The card features two images of the player; one a profile, the other a signature shot of him dunking in his Lakers jersey. Numbered to just 250 copies, that’s an extremely low print run for a late 1990s release. As with many of the others on this list, PSA 10 copies are few and far between. 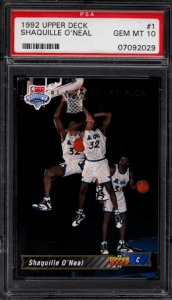 In his ‘92 Upper Deck rookie card, they attempted to capture a Shaq dunk from beginning to end. They’ve captured three separate images of the player in the process, lining them up together in a distinctive style.

This does make the card look fairly cluttered, and it’s a design choice most manufacturers decided against in the future. Nevertheless, the all-black backdrop does make the card pop, especially when checking out copies that have achieved a high grade.

As with many Shaq rookie cards, the drop-off from PSA 10 to PSA 9 is significant, dropping from four figures to a modest sum. 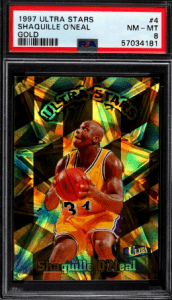 A rare insert in the 1997-98 Fleer set, 10% of the Ultra Stars print run was wrapped in gold foil as opposed to the more common silver version. The Shaq card from the set features a simple image of the player as he looks up towards the basket, backed by gold foil with an ‘Ultra Stars’ logo at the top.

Full-bleed edges and wrapped chrome make it one of the more expensive options overall, especially as it’s susceptible to a range of issues relating to the condition. Regardless, it’s still deserving of a spot on the list, and it’s rare to see a higher grade available at auction. 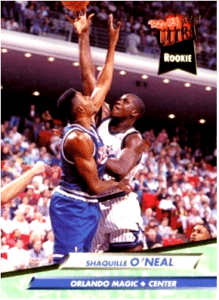 It’s fairly basic, but the image of the rookie has been surrounded by a comic-style flash to make the basketball stand out. Ahead of its time, Fleer even chose a new nickname for each player on the back. Shaq’s is “KaBoom”, while you’ll also find a profile shot of the giant on the reverse. 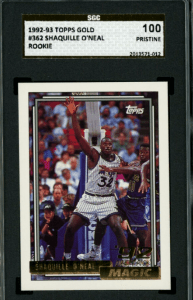 The 1992 Topps Gold is by far our favorite Shaq rookie card in terms of aesthetic appeal. It features O’Neal in a fierce battle underneath the basket, calling for the rock, manhandling Timberwolves forward Bob McCann in the process.

As we’re looking at the most valuable options, we’d bypass the base card and stick with the Gold parallel. However, according to the PSA registry, there are 502 gem mint copies at the current time of writing, so even perfect versions are relatively abundant compared to some of the other options. That hasn’t stopped the ’92 Topps Gold from being one of the more valuable Shaq RCs overall. 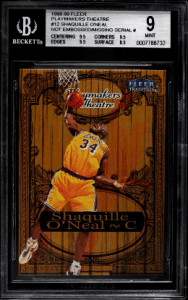 One of the earliest numbered inserts to feature Shaq, this card is found in the 1998-99 Fleer Playmakers Theatre subset. Surrounded by gold chrome and intricate detailing, Shaq is pictured as he leaps up to dunk, with his yellow Lakers jersey contrasting well with the background.

There’s a Fleer Traditions logo in the top right corner, while the serial number is found in the middle on the reverse. With only 100 copies produced it’s rare enough to be wanted by any serious Shaq collector. 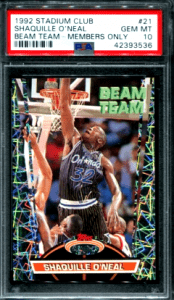 A bit of a slow starter in terms of values, the 1992 Beam Team insert almost nabbed the top spot on our list. The 1992 Topps Stadium Club card shows Shaq taking on gravity and rising above the rim for a rebound.

It’s named after the NBA halftime light show, and that explains the interesting multicolored background, set against a black border. The first-ever release of the insert, today the Beam Team collection is instantly recognizable and packed full of future Hall of Famers like Jordan, Scottie Pippen, Charles Barkley, and Karl Malone.

Black edges will show any and all flaws, so there aren’t many PSA 10 versions in the present. You’ll find that there are two different versions, ‘Members Only’, and normal Beam Team inserts.

The Members Only version was limited to just 10,000 copies, which is minuscule for the era. Topps applied only a faint watermark stamp to the early Beam Team cards, so it’s easy to miss. As of now, only 55 copies have earned gem mint status. 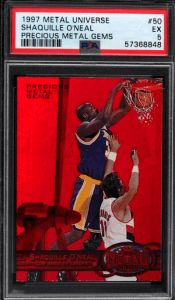 We promised we’d be back for the 1997 PMG set, which takes the top spot thanks to a low print run and a legendary design. With just 100 copies overall, the 1997-98 Metal Universe PMG Shaq card has to be seen as the best investment piece overall.

Put it this way. You’re unlikely to find a copy of this card in the average collection, while the same can’t be said for the popular Beam Team insert.

The PMG card features an image of Shaq as he dunks in customary fashion, backed by a crisp red foil that flakes away instantly if disturbed. 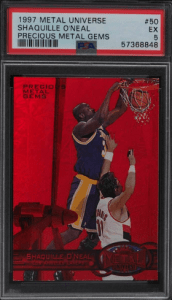 Shaq’s basketball card values are slightly lower than you might have expected, especially because he is one of the best players the league has ever seen and the dominating force of his era.

The Beam Team insert is going to be easier to procure than the PMG, especially if you want to invest in a copy that has achieved a high grade.

The Shaq Beam Team has to be seen as the best investment pick if you’re looking for a card that will be easier to track down, and more likely to snag at a reasonable price.

The PMG is likely to have the largest potential for profit, as part of a popular set released before the turn of the century with a tiny print run.

Having said that we wouldn’t rule out the 1997 Metal Universe Precious Metal Gems /100 #50 Shaq card as a top ROI contender.

What Shaq cards are worth money?

What is the best Shaq rookie card?

What Michael Jordan cards are worth money?