The average golf card still does not compare favorably to the average basketball or football card. However, top cards from prominent golfers can command notable prices.

The ten cards we have featured here give you an idea of what collectors crave when it comes to golf.

However, there’s no denying that these 10 golf cards remain the apples of collectors’ eyes, and will continue to garner strong demand for the foreseeable future.

Without further ado, let’s take a look at the most expensive Trading Cards these Professional Golfers have to offer. 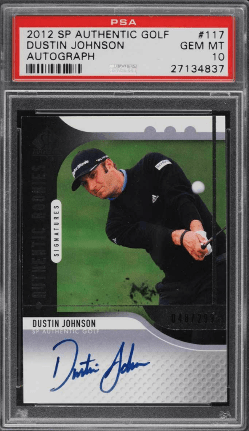 Dustin Johnson is the lone Young Gun to make this top ten list, speaking to his impressive accolades as a long driver with many rounds left to play.

The 2012 DJ SP Authentic Auto #117 has a limited print run of 299, providing that fixed supply that collectors hope for.

The card is sleek if unspectacular. A lanky Johnson leaves a divot as he lifts the ball out of frame. The ball is visible in the shot (a cool feature).

Johnson sports a black-themed getup, from his sweater to his hat and even wristband. He holds in a breath as he keeps his head locked onto the point of contact.

The rest of the card’s design is dedicated to framing DJ’s photograph. A rounded black border on the left leads into a white border up top.

It’s a well-conceived design that is, like most golf cards, understated. This is one of the most bankable golf cards from the tour’s younger generation of talent. 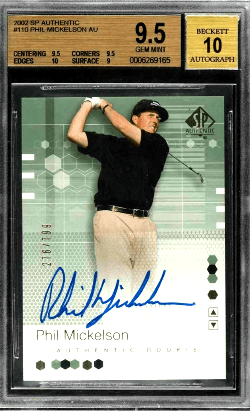 Phil Mickelson’s impressive professional resume, including his 2021 PGA Championship victory, has continued to drive the value of his cards.

His 2002 rookie card from SP Authentic, which contains an autograph and benefits from a limited print run, makes our cut for the top 10 golf cards.

The card shows Phil in a black polo, black visor, and khaki slacks swinging his iron. There is a lot of card around Phil’s image, including several overlapping geometric shapes.

A blue signature sits just below Phil’s khakis. Beneath the signature is a “Phil Mickelson” nameplate, and below that nameplate reads “Authentic Rookie”.

The base rookie card has a mild green backdrop, while parallels contain silver and bronze coloration. 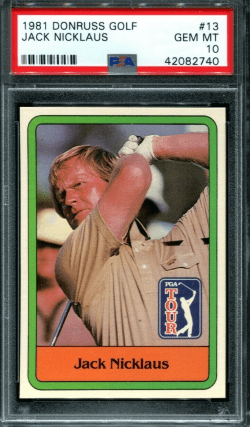 Because golf cards are not as abundant as cards for other sports, you’ll find that even widely available cards are in high demand.

This is the case for the 1981 Jack Nicklaus Donruss RC #13. Despite PSA accounting for multiple hundreds of Gem Mint copies of this rookie card, it remains a valuable hot-ticket item.

Throw “Jack” and “rookie card” in the same sentence, and you end up with strong demand. The 1981 Donruss RC #13 is a cool-looking card, to boot.

The card’s graphics feel like they belong on a 1980s television show, with a rounded green sub-border and orange “Jack Nicklaus” nameplate immediately catching the eye.

A large PGA Tour logo sits just above the nameplate in the card’s bottom-right sector. This isn’t the rarest golf card in the world but has garnered prolonged demand over multiple decades.

This is among the best sports cards to invest in now. 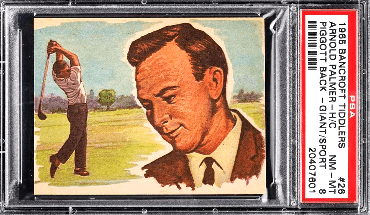 What would a top golf card list be without Arnie?

It features a horizontal layout with old-school comic book-style illustrations. On the card’s right side is a headshot of a suit-and-tie-wearing Arnie, eyes cast downward.

On the card’s left side is a full-body mural of Arnie’s statuesque swing, hands cast high above his head with the club shaft parallel to his back.

The background for both images is a pristine fairway with trees and shrubs in the distance. The card’s backside features an in-depth accounting of Arnie’s career feats and winnings.

There is a limited pool of PSA 9-graded copies, and those are the copies that you want to get your hands on 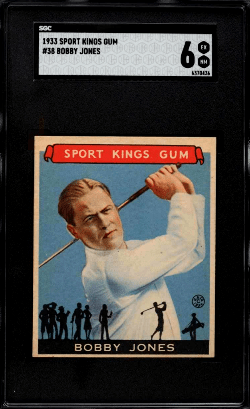 Particularly valuable are the Mint 9 graded copies of the card, of which there are less than five.

The card has a portrait and overall design that feels ahead of its time. Though it has the more squared dimensions of an older card, the portrait image of Jones is regal.

The twenty-something golfing legend completes an effortless swing in a white, long-sleeved golf shirt. He squints into the distance with perfectly manicured hair that is a trademark of every Jones golf card.

At the card’s upper border is a Sport Kings Gum banner, red with a black border and white font. The bottom border reads “Bobby Jones” in white font amidst a black nameplate.

Small shadow figures of golfers, spectators, and a caddy are the final features of this card’s thoughtful design. 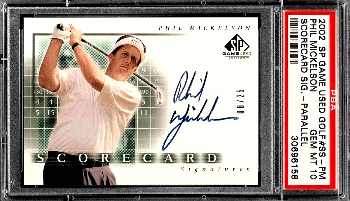 The 2002 Phil Mickelson SP Game Used Scorecard Signatures #SS-PM stands out because of its limited print run. With only 25 copies produced, the supply is highly restricted.

Though this card is not generally granted rookie-card status, 2002 was the first year that licensed Mickelson golf cards hit the market.

This one was built to last, with a white backdrop blending well with an image of Phil in a white mock turtleneck. Lefty stares intently at an iron shot, lips pursed as he sports a white visor and black slacks.

A blue autograph features prominently, occupying the blank white panel on the card’s right side. A blue leaderboard backdrop provides contrast between Phil’s image and the card’s white base.

Though technically a rookie card, the card commemorates Tiger at his peak. Upper Deck captures Tiger’s dominant 2000-01 streak perfectly with the image it chose for this card.

Tiger points knowingly (dare I say, cockily?) at a hole where he has just sunk a putt. He sports the iconic Sunday Red with black slacks and shoes.

The card’s design is minimalist. An embossed gold Upper Deck logo and lower Tiger Woods nameplate are the only features. The nameplate includes a leaderboard-style graphic.

Though second in the Tiger RC pecking order, the 2001 Upper Deck RC #1 remains a Tiger Woods rookie card. That distinction alone earns it the second spot on our list 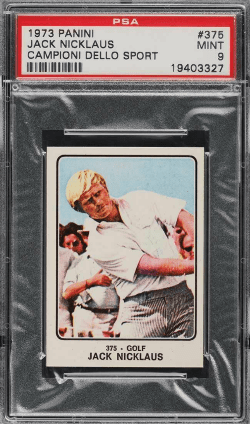 Many collectors may not realize that Panini is an Italian company located in Modena, Italy. “Campioni Dello Sport” is Italian for “sports champions”. In English, “sports champion” translates loosely to “Jack Nicklaus”.

And thus, we have the 1973 Jack Nicklaus Panini Campioni Dello Sport RC #375, one of the premier golf cards ever to grace cardboard.

The card features The Golden Bear in the penultimate stages of his swing. The gallery observes behind him as his hair shines in the sun. He rocks fresh, 70s-era golf threads.

The card’s only designs are a rounded block sub-border and a simple “375-Golf-Jack Nicklaus” nameplate. The “Golf” portion alludes to the fact that Panini produced this set to feature athletes across several sports.

Collector note: Gem Mint copies of this card sell for significantly more than other grades.

As one of the greatest golfers of any era, Bobby Jones’ 1932 U.S. Caramel #3 ranks among the top cards for any golfer not named Tiger.

The 1932 U.S. Caramel set is known for having common design flaws, which makes Mint copies of this card all the more valuable.

The card shows Jones in his twenties (he retired at 28), staring intently forward with the middle part common to men’s grooming in the early 1900s.

As you’ll find with some older cards, this one does not have the standard rectangular dimensions, instead of appearing nearly square.

Certain collectors may value this card just as highly as a Tiger card considering its age, Jones’ stature in golf history, and the card’s refined, classic appearance. 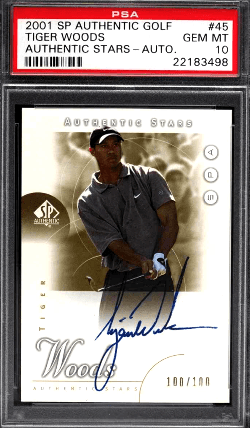 You don’t have to be a golf analyst to guess that Tiger Woods golf cards are top commodities.

The 2001 Tiger Woods SP Authentic Auto RC #45 tops the list of golf cards because of its autograph, rookie-card distinction, and a limited print run.

With only 900 copies and the Tiger Woods factor, this is the elite of the elite when it comes to golf cards.

The card itself was designed to be timeless. It takes few risks, with a white backdrop, fairway-green backsplash, and a combination of the cursive and plain font.

The image of Tiger is muted as well. He stares intently at a just-launched short shot, jaw clenched with extreme focus. He sports a loose-fitting grey Nike polo that was en vogue circa 2001.

Wood’s expertly crafted blue signature lies between his photograph and his cursive nameplate below.

The card’s overall look is perfectly…golf: Understated and built to last.

This is among the best sports cards to invest in now.

Memorabilia for Tiger Woods, Jack Nicklaus, Arnold Palmer, Bobby Jones, and other legendary golfers have always been in high demand.

However, with the rising tide of sports cards values, it was only a matter of time until a broader spectrum of golf cards caught collectors’ collective eye.

We have witnessed golf card values rise steadily, and brands like Upper Deck have released sets to cater specifically to collectors’ cravings for new golf cards.

While cards from old legends are still tried and true, we’re seeing younger cats like Dustin Johnson force their way into collectors’ consciousness.

Golf cards as a whole are a fairly untapped segment of collecting with much room for growth. Still, because the sport is still a bit of a niche, there is something of a value ceiling for the run-of-the-mill golf card.

What golf cards are worth money?

How much is Tiger Woods rookie card worth?

A Tiger Woods rookie card can be worth a few hundred or a few thousands depending on the card, brand, and card condition. Email us at value@goldcardauctions.com to receive one free golf card value appraisal per month.

What is Jack Nicklaus card worth?

The most valuable Jack Nicklaus golf card is the 1973 Panini Campioni Dello Sport Golf RC #375 as it can go well into the 5 digits at PSA 10 grades.