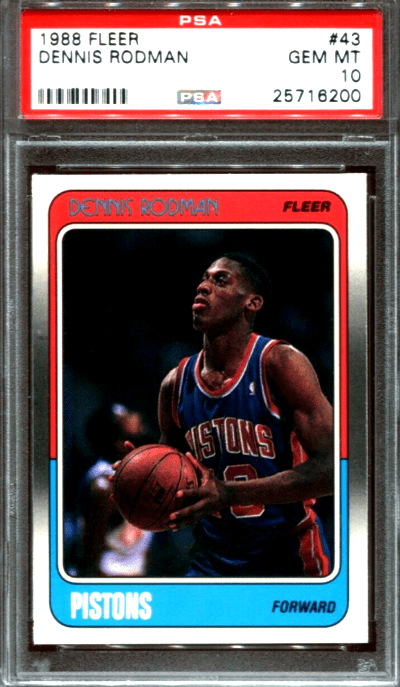 Over 4,500 players have made it into NBA courts over the years, we all have ballers that we love to hate.

The NBA is packed with a number of controversial players, some of which also happen to be the biggest names in the game.

The majority of the players to make the list only have committed minor misdemeanors in the grand scheme of things, but they’re still deserving of a spot for one reason or another.

We’ve produced a round-up with seven of the most-hated NBA stars of all time, along with why they’ve made it onto the list.

For any potential investors, we’ve also added information about the best rookie cards for the NBA players that people love to hate.

Most Hated NBA Players of All-Time

The ‘most hated’ NBA stars all share a number of commonalities. Each was (or is) incredibly successful, and there’s no denying their individual talents. 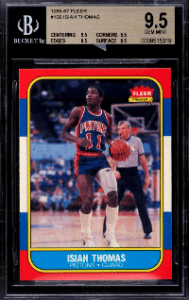 Isiah Thomas is the first player to make the list.

There’s no denying his skills, but as the leader of the “Bad Boy Pistons” he bullied his way to 2 championships at the expense of three more appreciated dynasties (Lakers/Celtics, then the Michael Jordan-led Chicago Bulls).

Many of Thomas’ fellow players didn’t like him, and he’s still feuding with MJ to this day.

His rookie card (#109) is found in the fabled 1986 Fleer Basketball set, wrapped in red, white and blue.

An excerpt from Bill Simmons’ The Book of Basketball best explains Rick Barry;

“In the first few minutes, Phoenix’s Ricky Sobers jumped Warriors star Rick Barry and landed a few punches before teammates pulled him off. 10 At halftime, Barry (a notorious prick) watched the tape and realized his own teammates hadn’t leaped in to save him. Fuming, he spitefully refused to shoot for most of the second half—no lie, he refused to shoot—playing hot potato anytime someone passed him the ball. And that’s how a 42–40 Suns team advanced to the Finals, upsetting the defending champs on their home floor as their best player played an elaborate game of “eff you” with his teammates.”

Barry’s RC is found in the 1971 Topps Baseball set, with ‘groovy’ text and a bright blue background.

Higher grades are reasonably valuable, and it includes a great action shot of the player. 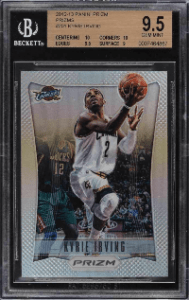 Kyrie Irving is hated by Celtics fans, as well as anyone who has picked up on his perceived resentment of LeBron James.

He’s also guilty of hero ball from time to time, which is frustrating for fans and fellow players alike.

His flat-earth views have invited derision, but there’s no denying his talents on the court.

The latter is also a great option, although the duo are highly condition-sensitive. 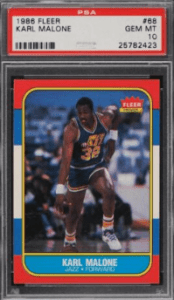 Karl Malone was absolutely brutal during his career, and is seen as one of the greatest players to never win a ring.

Disliked due to aspects of his personal life, he never failed to fling an elbow when the opportunity arose.

Once again, we’re looking at the 1986 Fleer Basketball set, with Malone’s RC (#68) wrapped in the familiar red, white and blue.

Given his exploits, PSA 10 copies are exceptionally coveted. He wasn’t included in the 1986 Fleer sticker set which also makes it the only early option for collectors.

Better known for everything from reality TV to cosying up to North Korea in his latter years, it’s easy to forget that Dennis Rodman was once a defensive phenom.

The dislike for Rodman stems from his unique style, from dying his hair the colour of the rainbow, or piercing his nose and his lips.

Jealousy also plays a part, as he embarked on a short-lived relationship with Madonna and a fleeting marriage to Carmen Electra.

His top RC is found in the 1988 Fleer set, even though the Worm was drafted in 1986. The card has a history of centering issues making it harder to find at high grades. 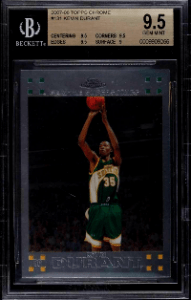 Kevin Durant nearly took the top spot on the list for a plethora of reasons. Data suggests he was the second ‘most hated’ player in the NBA, according to fan tweets in 2019.

His move to the Warriors was derided, as was the fact he publicly considered himself to be the “best player in the world” over LeBron James.

The front of the card shows a young KD in his green Seattle SuperSonics road jersey spotting up from the wing. The refractor effect is also a nice finishing touch. 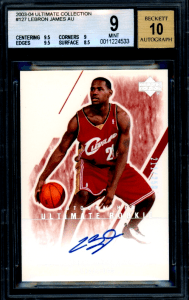 Whether it relates to his sustained success on the court, or his choice to leave the Cleveland Cavaliers for the Miami Heat in 2010 via “The Decision”, it’s easy to see why LeBron James tops the list.

“His rookie cards are also just as newsworthy as the player.”

It was one of just 23 copies, and represents the best James RC overall.

A more attainable card comes in the form of the 2003 LeBron James Topps Chrome Refractors RC (#111).

Most Hated NBA Players of All-Time

It’s fair to say that this list contains some of the biggest names the sport has ever seen.

Hatred is often a byproduct of sustained success, so it’s to be expected whenever a player breaks the mould, and goes against what is expected of them.

This can be in the form of Rodman wearing a wedding dress and deciding to marry himself, or Durant joining the Warriors to form a super team.

As always, we would look to graded copies if you’re picking up expensive rookie cards as potential future investments.

This is especially important if you’re aiming to avoid picking up any fakes or forgeries, which are more prevalent with older sets.