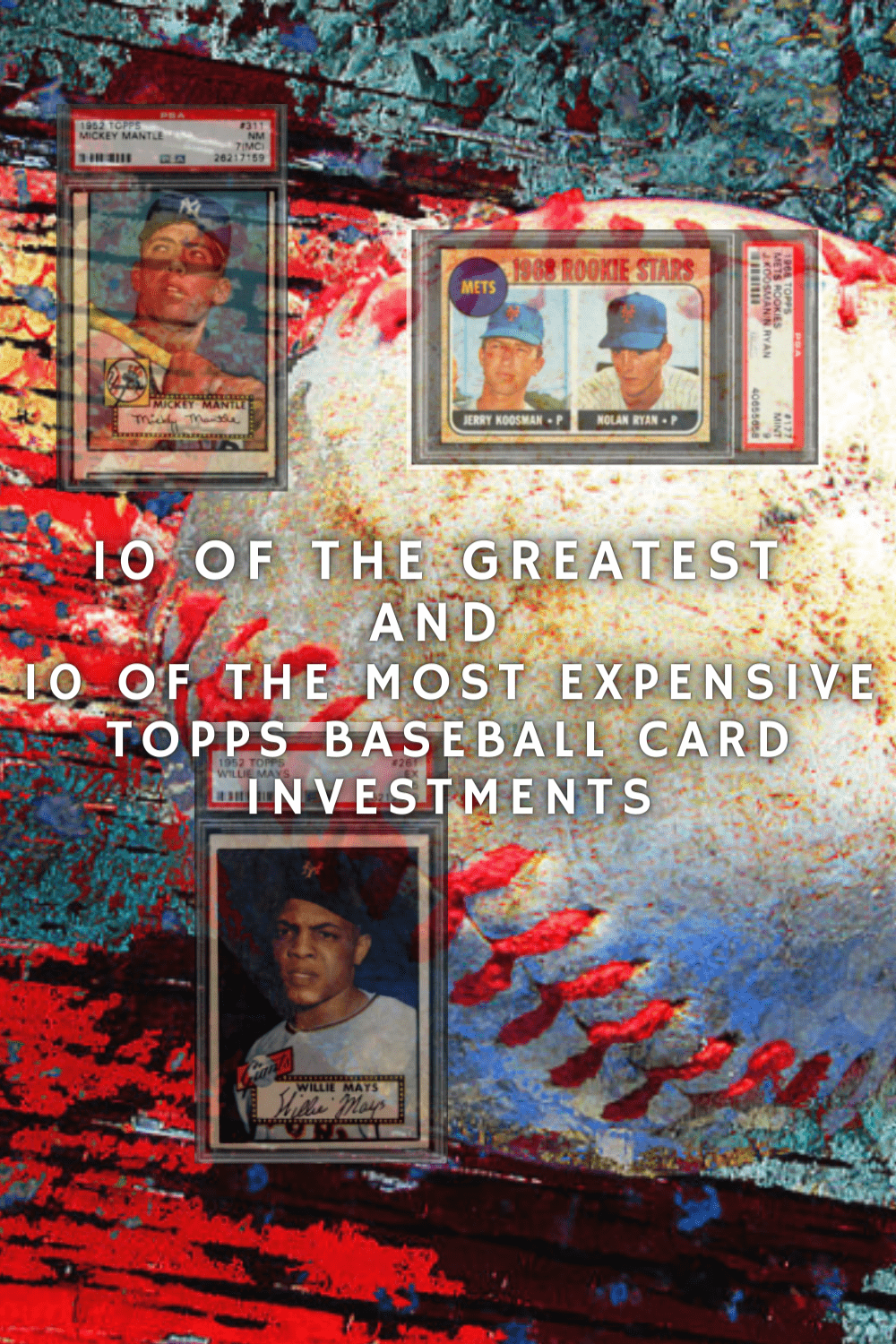 Americans cited baseball as their favorite sport when Gallup first started recording the statistic in 1937.

Baseball held the distinction as the most popular sport in America until the early 1960s when football became Americans’ primary sport of choice.

It should not be surprising, then, that the most expensive baseball cards today are decades old (and in the case of Honus Wagner’s iconic trading card, more than a century old).

Unlike some other sports, value in the baseball card game is linked in many cases to the age of the card.

If you can find a baseball card that is old, features a prominent player, and is in good condition, then you have the makings of a valuable item.

This holds true for the most expensive Topps baseball cards of all time.

Topps cards have a rich history dating back to 1938 Brooklyn. What started as a chewing gum brand evolved into a “Photo Card” brand, and eventually one of the best-regarded sports card brands in the game.

Let’s take a look at the best Topps baseball cards from an investment standpoint, meaning the top ten cards that have the most significant long-term ROI (return on investment).

Please only purchase graded cards when buying expensive Topps baseball cards, as purchasing a raw card is too much risk. 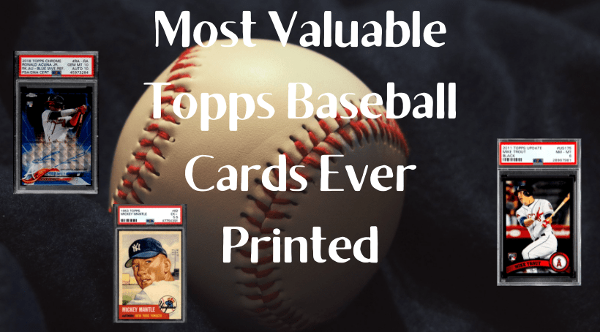 Topps notes that 1952 was the first year of the “Modern Baseball Card Era”. It is no coincidence, then, that our list of most expensive Topps baseball cards (read next: 1991 Topps Baseball Cards) start right around 1952.

One of the best if not the best pitcher the world has ever seen (Bob Gibson would have something to say about that).

Andy Pafko is one of the less recognizable names on this list. However, he proves that name recognition is not the end-all, be-all when it comes to baseball card value.

To be clear, Pafko was no slouch. He had more than 1,700 career hits and 213 career home runs. However, the 1952 Topps #1 Andy Pafko is important because it was the first card in this set. PSA calls this card the “most important #1 card of the postwar era”.

The card itself is nice, but not anything particularly memorable. Pafko smiles into the camera in his white Brooklyn Dodgers uniform and matching blue cap.

The iconic early-era Topps nameplate sits at the bottom of the card, containing the plain text “Andy Pafko” along with a printed version of his signature.

Finding a mint Topps #1 Pafko is exceptionally difficult. The price that this card can fetch (six figures) is a reflection of how rare and iconic the card is. Because, let’s be honest, the name Pafko isn’t the reason why this one made the list.

Hank Aaron is not a name that even casual baseball fans would be shocked to see on this list. His recent passing sparked a number of fitting tributes, but Aaron was always revered. Baseball purists and baseball card enthusiasts alike put the respect on Aaron’s name that it deserves.

In terms of cards, respect translates to resale value.

Even if this card was of a lesser player, it would be one worth collecting. The design is iconic, with Aaron’s face printed prominently on the right-center portion of the card.

An orange background sits behind the old Milwaukee Braves logo in the top left corner. A small, black-and-white image of Aaron fielding a grounder occupies the bottom-left portion of the card.

Copies of this card graded mint or better will generally command a six-figure price point. 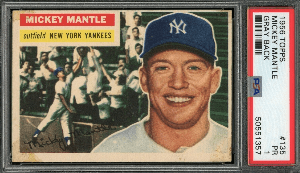 With only four known Gem Mint versions of this card in circulation and an always-high demand for old Mantles in pristine condition, its future value knows no limits.

Unlike most other baseball cards of the era, this one has a horizontal design. A headshot of Mantle dominates the right side, showcasing Mantle’s New York-ready grin and blue eyes.

The left side of the card features Mantle leaning into a sea of fans to snag a foul ball. Below that image is a facsimile signature in black ink. And you thought Mickey was just a bat…

Mint Mantles are among the most valuable baseball cards you can own. With cards from this era being frequently damaged, securing this card in good condition could be a windfall.

Of course, securing it will cost you a windfall as well.

Continuing the trend of expensive rookie cards from Topps 1952 set, we have the 1952 Topps #261 Willie Mays RC.

In the signature style of this set, the image of Mays contains only his mid-torso and upward. Mays, who looked like a seasoned vet even as a rookie, furrows his brow as he stares into the camera. He wears a blue Giants cap with an orange, stylized “NY”.

Like the other rookie cards in this set, Mays’ RC contains a white nameplate bordered by a black-and-yellow trim.

His laser-printed signature is located beneath the printed text of his name, while a Giants logo forms the upper left corner of the nameplate.

For collectors seeking an investment virtually guaranteed to appreciate with time, you can do far worse than a Willie Mays RC in good condition. 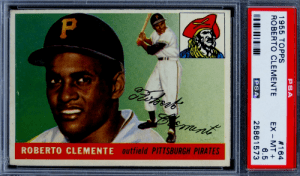 One of the most iconic players ever to put on a Major League uniform, Roberto Clemente was the first Latin player to be inducted into the National Baseball Hall of Fame in 1973.

His tragic death caused by an airplane accident has only enhanced the mystique of Clemente, who was known as a charitable force off of the field as well as a dominant player on the diamond.

The 1955 Topps #164 Roberto Clemente Rookie Card is one of the most coveted pieces for any collector’s lot. It features a headshot of Clemente sporting his movie star grin in a Pirates batting helmet. Sitting on his left shoulder is a smaller image of Clemente at-bat.

A swashbuckling Pirates logo occupies the top-right corner of the card while a faux signature is also present. Mint versions of this card generally fetch at least $300,000 and could draw significantly more.

When it comes to valuable baseball rookie cards, Mantle is a name that consistently appears near the top of the list. Were it not for a guy named Honus Wagner, Mickey Mantle would have the most expensive baseball card in existence (more on that in a bit).

The 1953 Topps #82 Mickey Mantle RC shows a drawn image of Mantle, blue eyes affixed upward and to the left, in his dark blue Yankee cap. A stadium backdrop frames Mantle’s likeness in what could easily double as a movie poster for a James Dean film.

The bottom of the card features a red nameplate with Mantle’s name, team, and position. A Yankee logo stands to the right of the nameplate.

Have a few hundred thousand dollars and a yearning for one of the most iconic cards ever? This is the card for you.

It’s unlikely that we ever see a career like Lynn Nolan Ryan, Jr.’s again. He lasted an MLB record for 27 seasons with the Mets, Angels, Astros, and Rangers.

Do you know what kind of filthy stuff you’ve gotta possess to last 27 seasons as a pitcher in Major League Baseball? Nolan Ryan-level filthy stuff, that’s what kind.

Former two-time MVP Dale Murphy has said that Nolan Ryan is the only pitcher he started worrying about two days before he faced him. You’re darned right his rookie card is primo stuff.

The card is as predictably unflashy as you might expect a 1968 baseball card to be.

A rounded rectangular border surrounds the player images. Each has a black and white nameplate, while “1968 Rookie Stars” sits in red letters atop their pictures.

A Gem Mint copy of this particular card sold for $500,000 in August 2020. It has been listed for twice that amount since then.

When they print these cards, the manufacturers don’t always know who’s going to go on to become Charlie Hustle, and who will be stuck as Al Weis.

This is not only a valuable card but a fun one as well. It has a floating-head effect, with all four players’ domes placed in the center of red circular backgrounds.

A yellow background contrasts those red circles. A thing white border leads into a baby blue rectangle up top. Inside that rectangle is “1963 Rookie Stars” in plain white text.

Rose, in his red-and-white Cincinnati Reds “C” cap, has a boyish look that would fit into a high school squad (or a squad of floating heads).

There is only one known Gem Mint version of this card. Its last known sale price, according to PSA, is north of $700,000.

Its next known sale price will be higher. You don’t have to be Pete Rose to bet on that. 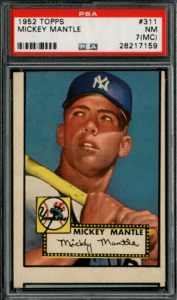 It can’t be said enough: when you’re talking trading card investing, Mantle is money. Quite literally.

Proven to be one of the two or three most valuable baseball cards on the planet, the highest-graded versions of the 1952 Topps #311 Mickey Mantle RC come with a multi-million-dollar price tag.

The color-drawn photograph is stunning in its iconography and simplicity. A white nameplate (with the trademark yellow and black Topps trim) contains a printed autograph. 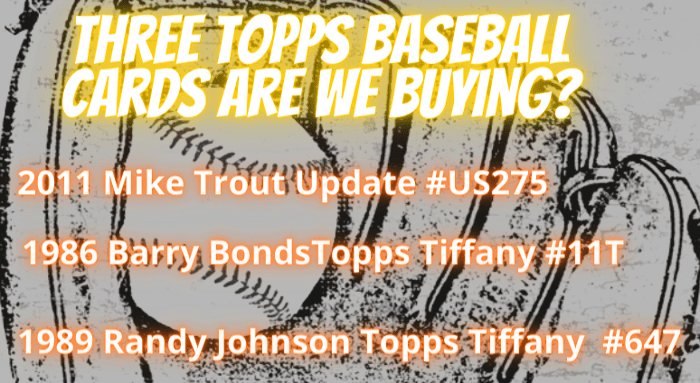 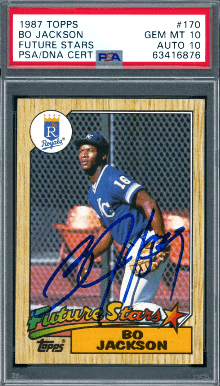 From Mantle to Aaron and even Pafko, old is good when it comes to baseball card investment.

Because so few older cards are kept in tip-top shape or even kept around, rarity is generally the case when it comes to baseball cards from the 50s.

It’s no surprise that the most valuable Topps cards of all time come from that era, with the exception of one Mickey Mantle card printed in 1961.

Each of these cards has shown strong appreciation over time and is a high-priced yet sound investment for any card collector who can justify the purchase price.

Which Topps baseball cards are worth the most money?

What is the most valuable Topps baseball card?

The most valuable Topps baseball card is the 1952 Mickey Mantle Topps rookie card selling for $5.2 million in February of 2021.

Are there any valuable 1989 Topps baseball cards?

There are thousands of baseball cards from the '80s and 90's worth money but our favorites in terms of ROI is the 1989 Ken Griffey Jr. Upper Deck rookie card #1 and the 1987 Barry Bonds O-Pee-Chee OPC rookie card #320.

© Gold Card Auctions 2022 All Rights Reserved - Gold Card Auctions participates in various affiliate marketing programs, which means we may get paid commissions on editorially chosen products purchased through our links to retailer sites. GoldCardAuctions.com provides trusted world-renowned rookie card analysis. We are dedicated to helping our loyal readers maximize hobby profits. Investing in anything, including sports cards, involves risks, and there is always the potential of losing money when you invest in sports cards. Past performance, historical returns, future projections, and statistical forecasts are no guarantee of future returns or future performance.
10 Shares
Tweet
Share
Share
Pin10