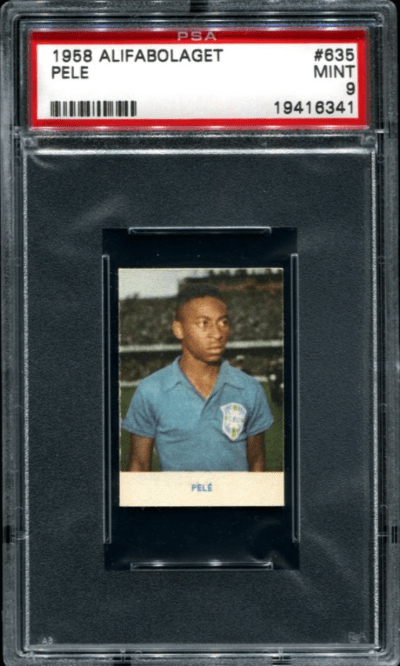 Edson Arantes do Nascimento, known more commonly as Pele (10/23/1940) was a Brazilian striker who won three World Cups during his prestigious career.

Pele is regarded by many as the best footballer to ever suit up.

“Pele is the greatest player of all time. He reigned supreme for 20 years. All the others – Diego Maradona, Johan Cruyff, Michel Platini – rank beneath him. There’s no one to compare with Pele” – German World Cup winner Franz Beckenbauer

With unrivaled ball control, pace, and flair for the dramatic, it’s only fitting that we honor the legend Pele with a list of his most expensive trading cards.

Because Pele played his last professional match with the New York Cosmos in 1977, most of the cards listed here are decades old.

Those who were wise enough to preserve Pele cards for decades are to thank for these absolute gems. 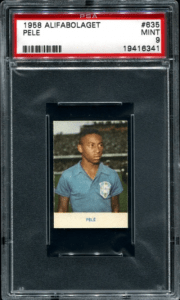 Generally considered the cream of the crop for not only Pele cards but all soccer cards, we have the 1958 Pele Alifabologet #635.

The Swedish card features a 17-year-old Pele in his blue, collared Brazilian national team kit. The image originates from the 1958 World Cup in Stockholm, Sweden.

The fact that Brazil won that World Cup makes this card all the more iconic.

The young prodigy gazes to the left of the camera, while the blurry images of spectators in the stands serve as the backdrop.

It’s an ultra-minimalist card. The dimensions are far smaller than the typical trading card, and the only feature on the front is a white nameplate reading “Pele”.

It’s considered a rookie card and will likely continue to pace the market for Pele trading cards. 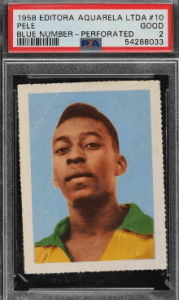 It’s a difficult card to find in good condition—a single copy has a PSA grade of 7, and no other Pele Aquarela Editora Blue has a higher grade.

The age and rarity of this card make it a prized item. It’s also a Brazilian card, with the card stock originating from the same nation as Pele himself.

Because these cards were originally printed in sheets of 24 cards, the miniature-sized Pele RC contains perforated edges where it was separated from its sheet.

Pele’s headshot has the quality of a painting. He looks downwards with an emotionless expression befitting his cold-hearted competitiveness.

He sports a vibrant green-and-yellow Brazilian national team kit. A baby blue background contributes to the tropical, South American vibe of this card. 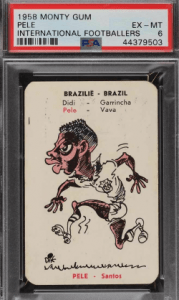 This version of the 1958 Pele Monty Gum “International Footballers” RC features a red background, a rarer alternative to that with a green background (which is also available for purchase).

At least one copy of this card earned a PSA grade of 7, a notable distinction for a card produced in 1958.

The image on the card is unlike any other Pele card you will find. It’s a cartoon version of Pele that, you can bet, would not be produced today.

This sort of image may resemble attitudes in Holland, where Monty Gum cards were produced, circa 1958. It’s something of a time capsule.

This specific version of the card is notable for its playing card design. An “A” in each rounded corner, along with a clover-like design, makes this feel like part of a soccer-themed playing card set.

The design is an iconic theme that Monty Gum would continue for decades. Still, this specific card stands out from subsequent Monty Gums because: 1) it is a Pele card, and 2) Monty Gum would eventually replace cartoon images with player photographs.

If you’re looking for a valuable, rare, and iconic Pele card, this is a great choice. 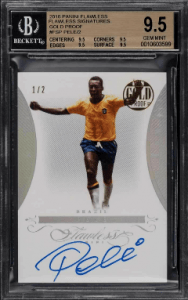 Even as Pele’s playing days are long behind him, trading card companies have continued to produce his cards.

Out of the plethora of modern Pele cards, we believe that the 2016 Panini Flawless Signatures Gold Proof Auto series is one of the most notable.

There are several parallels of these cards, most of which are numbered /1 or /2.

They feature a centered image of Pele, arms stretched upward in triumph as he wears a sweat-soaked gold and blue Brazil national team kit.

The trademark cursive “Flawless” logo underscores the image of Pele. Beneath that logo, Pele’s signature features prominently in blue ink.

This card does a stellar job of combining a vibrant image of Pele during his playing days with modern design features. The limited runs of each Gold Proof card keep demand high.

Pele is in rarified air when it comes to card collecting. His cards, and his rookie cards, in particular, belong in discussions with names such as Mantle, Brady, LeBron, and Gretzky.

There’s no reason to believe that Pele’s cards will become any less desirable barring a wholesale collapse of card collecting and trading.

Pele’s specter only grows larger with each passing year, and the cards of such all-time greats remain rock-solid investments.