There’s no point in listing the most expensive 90’s hockey cards without first mentioning the ‘junk wax era’. From 1987 to 1994, companies like Topps churned out cards to match ever-increasing demands, until they oversaturated the market with thousands of worthless options.

It finally ended when players went on strike in 1994, as Bud Selig, the acting commissioner of baseball, went so far as to cancel the World Series entirely.

In time for the 1990/91 season, three new manufacturers became licensed by the NHL and NHLPA. Pro Set, Score, and Upper Deck make up the trio, with a number of their releases making the list of the most expensive 90’s hockey cards.

Legends like Wayne Gretzky do dominate, but there are a few interesting options that you might have missed. Here are 10 of the most expensive hockey cards from the ’90s, with information about how each one made the list.

10 Most Expensive Hockey Cards from the 90s

We’ve put together a list with 10 of the most expensive 1990’s cards to have sold in recent months. They’re in chronological order and go on past the junk wax era as values began to pick up once more. 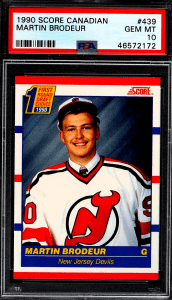 Where better to begin than 1990 when the junk wax era was still in full swing? The majority of the cards that make up the massive 1990 Score set are worthless, but Martin Brodeur’s RC is one of the few exceptions.

He spent 22 seasons in the NHL, 21 of which with the New Jersey Devils, winning three Stanley Cup championships, and five Eastern Conference championships. A true legend between the sticks, the 1990 Score focuses on Brodeur being chosen as a first-round draft pick by the Devils.

Rookie cards tend to be more valuable than the norm, while a combination of mediocre card stock and the red border at the top makes it difficult to find a copy of Brodeur’s 1990 Score that is still in good condition almost 20 years on. The values of PSA 10’s have held steady in recent years, making it a decent investment piece. 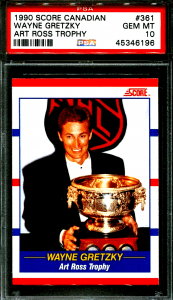 Widely considered to be the greatest hockey player ever, Wayne Gretzky was already an established star by 1990, winning seven Hart trophies in a row between 1980-87. There’s no better player to look out for in a list of expensive 90’s cards.

His 1990 Score is a decent option, although it’s worth a fraction of the value of the average Gretzky RC from the 1979-80 season. It’s part of the same set as the card listed above and comes with similar flaws in terms of the quality of the card stock.

As such, there’s a red white and blue border, while there’s an image of a suited Gretzky holding the Art Ross Trophy. (The trophy is awarded to the player who scores the most points in a regular season, as Gretzky tallied 142 points and 40 goals in 1990-91.)

It’s not his most expensive 90’s card, but a PSA 10 will still set you back by a fair amount. 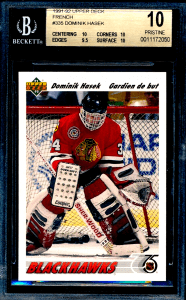 Dominik Hasek is one of the top goaltenders from the era, and this happens to be one of his more popular RC options. The 1991-92 Upper Deck release was their second foray into the hobby, building on the success of the previous year with another strong set.

There are no parallels, but there is a French version that has different text on the front and the reverse. You’ll be able to tell by checking out his position, which is listed as “Gardien debut”.

As well as an Upper Deck logo in the top left corner and a Blackhawks logo at the bottom, the card features a large action shot of Hasek defending his goal. It’s a good photo, while it’s worth mentioning that he was named in the All-Rookie team in the same year, adding further value.

Hasek was up against a young rookie by the name of Martin Brodeur when his team faced the Devils in Game 6 of the Eastern Conference Quarterfinals of 1994. Brodeur made 49 saves, but Hasak got 70 in a performance widely seen as the best ever by a goaltender.

Part of a set that looks back on the US Olympic Hockey Team’s famous win over the Soviet Union in 1980, this card was released 15 years after the fact. There’s a smaller image of the team celebrating in the bottom left corner, while it notes that it’s one of only 7,500 on the front of the card. (Okay, so 7,500 sounds like a huge number, but it was relatively meager compared to typical releases at the time).

The theme is stars and stripes, while a larger version of the image in the corner is the main focal point. You’ll be able to find an on-card signature with some editions, further raising the value depending on the player.

The Cold War might be long forgotten, but the win is still remembered as a key day in US hockey history. It’s no wonder that it manages to make the list. 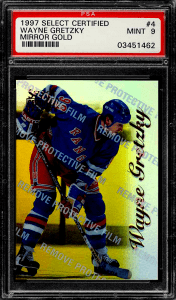 One of the 120 cards that make up the 1996-97 Select Certified set, each was also produced with a limited gold parallel version. A number of the parallels are reasonably rare as they were only released via one in every 300 packs, and there aren’t many that have managed to achieve a high grade.

As you might have guessed, Gretzky’s Select Certified is the one to make the list, which makes sense given his popularity. There’s no signature, but it does feature a massive image of the player in his New York Rangers kit.

Since the cards were finished with a silver mirror background, it’s one of the major flaws you’ll find if you’re hoping to add a copy to your personal collection. However, high-grade versions do look especially clean.

The 1996-97 SPx set was issued with just 50 cards, including a couple of special Wayne Gretzky versions. These come in the form of a ‘tribute’ (found 1:95), and an autographed tribute (found in just one in 1297 packs).

Each of the cards in the set features a full-motion hologram, with a unique cut that makes it stand out compared to other mid 90’s Gretzky options. It’s a landscape card, with an image of the player on the ice in the middle, along with two profile pictures on either side.

The blue and grey background is one small flaw, making it slightly faded compared to other more colorful options. It also makes the Gretzky on-card auto found on the front slightly harder to see, especially as it was done with a blue pen.

However, a unique signed Gretzky card is still valuable, and it easily makes the list of the most expensive 90’s hockey cards. 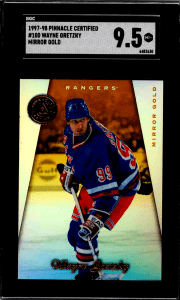 Okay, if you liked the look of the shiny Gretzky card mentioned above, this is another collectible that is going to grab your attention! The base version only sells for a couple of dollars, but as you can see below, there are lots of rare 1997 Pinnacle Certified parallels that help it to make the list of the most expensive cards from the era.

It’s a borderless design that features a good action shot of Gretzky, while most of the parallels are concerned with the background color, making them easy to differentiate. For example, the red parallel is completely red, while the gold is gold. It’s simple enough, but it gives all of the parallels a premium look and helps Gretzky’s card to make the list.

Unlike the card above, there’s no signature, but it’s still an attractive option that sells for a similar price. As with many Gretzky cards from the time, the name recognition and a number of rare parallels make it an expensive 90’s option. 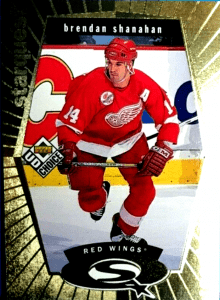 Brendan Shanahan is a former winger who featured in eight All-Star games and captained the team in 2007. His 1998-99 Upper Deck Choice is a unique card, with a large image of the player on the ice surrounded by a hexagonal border.

The Gold version of this UD card is the one to make the list, with the border color helping to catch the eye. There are only 100 copies of the gold card in existence, and you’ll be able to tell by checking out the serial number located on the reverse.

Rarity is the main reason why it’s so expensive, as the border chips easily, and there weren’t many copies produced in the first place. Any version with a decent grade will set you back by a fair amount.

The first card in the 1999-00 Topps Stadium Club set, Jagr is one of the few players on this list that still hits the ice regularly.

Jagr is best known for playing for the Pittsburgh Penguins, Washington Capitals, New York Rangers, Philadelphia Flyers, Dallas Stars, Boston Bruins, New Jersey Devils, Florida Panthers, and Calgary Flames respectively in a storied career. He still plays professionally as of 2020, for Rytíři Kladno in the Czech Republic at the age of 48.

His Stadium Club card has a strange design, but it makes the list thanks to a decent action shot coupled with an on-card signature at the base. The Lone Star Signatures logo is in the way slightly as it’s emblazoned across the middle, but it hasn’t affected the value of the card. 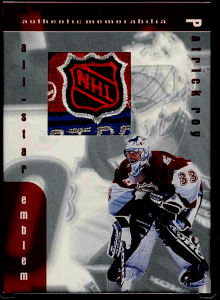 Patrick Roy is another goaltender, and the final player to make our list of the most expensive 90’s hockey cards.

1999-00 Be A Player (BAP) memorabilia focused on the NHL All-Star Game of the same year. (You can tell by checking out the back of the card, which lists the date of the game in question.)

Roy is featured below the Emblem patch, while the card has a premium feel to go with a strong red and grey design. (The red corners do scuff easily, so pay extra attention to the edges.) The addition of the All-Star Emblem patch is the main reason why this card makes the list, as it’s an attractive prospect for any serious collector.
[/newsletter_lock]