As the 2022 NHL playoffs begin, the pressure is on for Mitch Marner and the Toronto Maple Leafs. After exiting in the first round for five consecutive years, the Maple Leaf fandom will not tolerate another first-round exit.

No player on the Leafs has more pressure on them than Mitch Marner. Marner has the unfortunate distinction of being the second-best player on the Leafs behind Auston Matthews. He notoriously did not score in the 2021 playoffs, and despite having a great season in 2022, Marner needs to perform in the playoffs.

With that in mind, Marner has been a tremendous player for the Maple Leafs since his rookie season. Marner scored 19 goals and 61 points in 77 games as a rookie. Since then, he has only improved, putting together four straight points per game season.

Marner’s tremendous rise to become one of the best players in the NHL has led the price of his rookie cards to rise. The fact that he is playing on the most popular team in the league does not hurt, either. As a result, people looking to invest in hockey cards should consider adding Mitch Marner to their collection.

Investing in hockey cards can be challenging because they do not have as much mainstream appeal as those from the NBA or NFL. However, the top player’s cards still make for solid investments, and Mitch Marner is one of those players.

Here we will look at three of Mitch Marner’s best rookie cards. 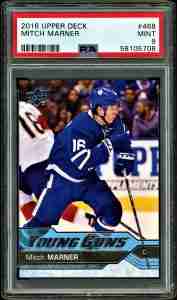 Upper Deck puts out its Young Guns collection every year, and every year it has all of the best rookies in the NHL. In 2016, their collection included this Mitch Marner card. Today it is one of the best cards in the collection.

Marner can be seen in his blue Maple Leaf’s jersey as he strides up the ice. The Upper Deck logo is in the top left, and the Young Guns logo is across the bottom of the card.

The back of the card displays Marner’s impressive statistics from his junior career in the OHL. It also lists his height, weight, birthday, birthplace, and handedness.

The Future Watch is another rookie collection that sells very well yearly. This card had 999 copies printed in a limited run. Since the cards are scarce, the card’s value has risen drastically, reaching four figures in most cases.

The thing that makes this card stand out is that it features an authentic autograph from Mitch Marner. You can see the autograph towards the bottom of the card between Marner’s legs. The picture features Marner moving to his left in his white Leaf’s jersey.

The back of the card is standard, featuring his junior statistics, another small image of Marner, physical characteristics, and a blurb that verifies the autograph’s authenticity.

The final card we want to look at is this one from O-Pee-Chee. This high-quality card shows Marner looking off into the distance in his blue Maple Leaf jersey.

At the bottom of the card are the Maple Leafs’ logo and Marner’s name. The right side of the card features a red stripe that reads “Marquee Rookies Marquee Recrue.”

The back of the card is fundamental, with a brown background. There is a large, faded Maple Leaf’s logo in the center. Then at the top, you can see Marner’s statistics from his three years with the London Knights of the OHL.

The value of Mitch Marner’s rookie cards can vary drastically depending on various factors. Standard cards in mint condition can be purchased for low three-figure or high two-figure prices.

However, cards like the one from the Future Watch collection with a limited run can sell for well over $1000. The price goes up even more if they are autographed.

If you have a Mitch Marner rookie card and want to know its value, let us know. Please include two photos in your comment or email.

Mitch Marner is one of the 15 best offensive players in the NHL and is still incredibly young. He also plays for the most popular team in the league the Toronto Maple Leafs. As a result, his cards are a slam-dunk buy for investors.

Marner’s cards should only increase in value over the next five years. Additionally, if the Leafs ever win a cup, they will skyrocket. The low price of the standard cards combined with the likely career trajectory of Mitch Marner makes his cards an easy buy.