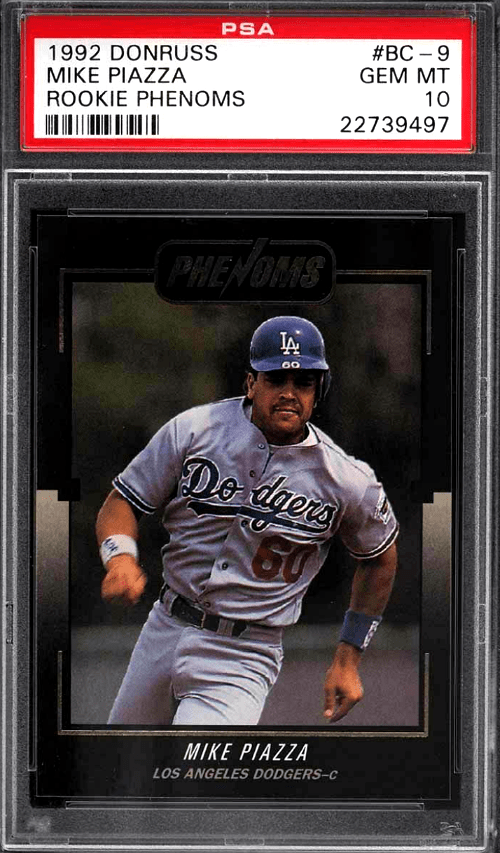 Mike Piazza is one of the hardest-hitting catchers of all time and one of the legends of the game.

He was inducted into the Baseball Hall of Fame in 2016 after a 16-year career which took him from New York to Los Angeles to a brief stint in Florida.

Originally selected as a favor to his father, Piazza was doing batting practice with the legendary Ted Williams from a very young age and it clearly all paid off as it was Piazza’s bat that was his best attribute.

There are only ten players in MLB history who hit at least 400 career home runs, had a lifetime average of at least .300, and never struck out over 100 times in a season.

Piazza is one of those individuals in that special group and is the only one that played catcher.

Beyond his bat, he was known as a strong defensive catcher that was able to frame pitches well.

Piazza is one of 10 players to hit 400 career home runs, have a lifetime average of at least .300, and never strike out 100 times in a season

Piazza had plenty of cards made of him during his career but only a few of him as a rookie.

Since Piazza enjoys such a legendary status in the game today, plenty of card companies have produced modern cards with his likeness on them to try to catch the attention of fans who are longing for a throwback.

Some of these modern cards have extravagant designs or unique features but the classic Piazza cards from the 90s just feature the traditional baseball card look that we all love.

There are only two cards that are considered official rookie cards for Piazza, but there is also a card that exists of his early playing days prior to making the MLB.

While the 1980s produced many memorable MLB rookie cards, the 1990s were an era of overproduction for all baseball cards, and this can damper some of the prices for Piazza rookie cards.

Here is one of the better Piazza rookie cards and is ideal for high-end investors at high-grades.

The 1992 Donruss Rookie Phenom Mike Piazza rookie card is numbered #BC-9 and shows Piazza chugging around the base path like a man who had to many hotdogs before working out.

His name and the Dodgers team name are centered at the bottom… a pretty simple card actually that is wrapped in a bold black border. 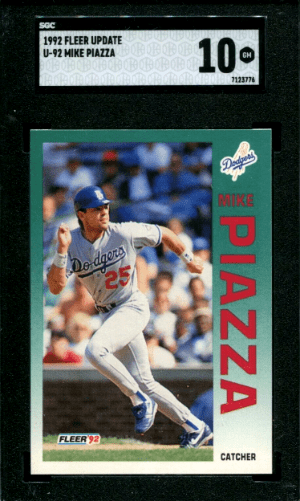 This 1992 Fleer Update card shows Piazza making a dash out of the batter’s box after connecting with the ball.

The card has a unique design with a full-length sidebar on the right side which displays Piazza’s name and the whole background of the card has a gradient color scheme.

The 1992 Fleer Update is the most recognizable Piazza Rookie CaRd

The 1992 Fleer Update Piazza card has a short print run when compared to other cards of the time and therefore can hold its value a bit better.

The card shoulders the majority of the value for the entire set and offers Piazza rookie investors a more limited option. 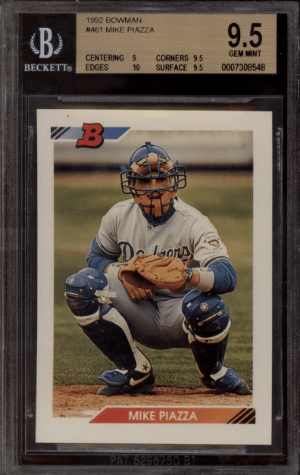 While usually less expensive than its Fleer Update counterpart, the 1992 Bowman Mike Piazza rookie card may just be more iconic.

It has a great photo of Piazza in his Dodgers uniform, down low in his catching stance and part of the reason it’s more recognizable is due to its higher print numbers.

Bowman is also synonymous with strong rookie cards today and that reputation carries over to this vintage card.

For investors looking to invest in a Piazza card, this one offers a great recognizable option.

Looking to purchase a Piazza baseball card (or rookie card) but need help. Email us at advice@goldcardauctions.com and we will help.

Piazza’s career, unfortunately, coincided with the era of overproduction for baseball cards and thus the values will struggle to break into that top stratosphere of prices.

Despite that, Piazza cards are still sought after due to his incredible play as well as the fact that he played in two major media markets in New York and Los Angeles.

Piazza is a good option for investors as there aren’t too many legends whose legend cards can be found for this price.

As time goes on the price of these cards should only rise as the population gets smaller, and getting a Piazza card graded highly and storing it in the proper way will result in a positive return on investment down the line.