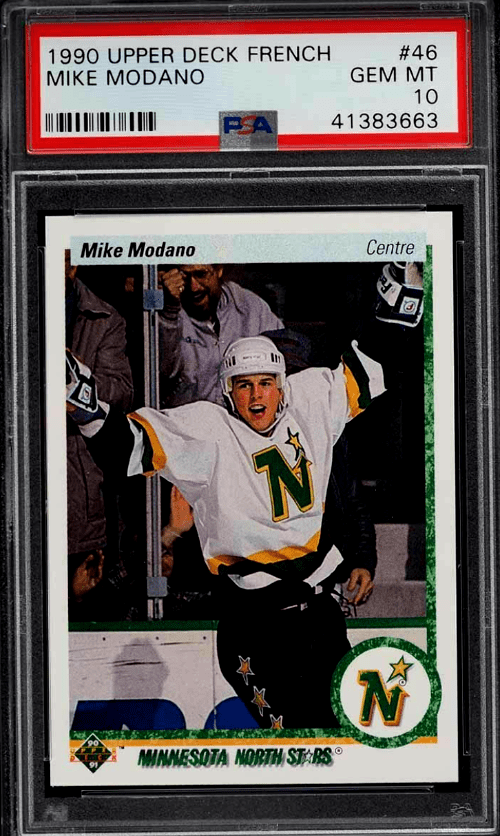 Mike Modano was drafted by the Minnesota North Stars with the 1st overall pick in the 1988 NHL Draft and boy did he not disappoint. Mike Modano’s rookie year stats included 29 goals, 46 points for a mind-blowing total of 75 points… obviously, Mike Modano’s rookie cards are going to be worth some coin.

His rookie year was no fluke as Modano went on to score a total of 557 goals to go along with 802 assists for 1359 total points in his NHL career. He also won a Stanley Cup with the Dallas Stars in 1999 AND holds the records for NHL goals and points (1,374) by a United States-born player… pretty impressive eh?

Without further ado, let’s check out the top-rated Mike Modano rookie cards from an investment point of view (which we feel are underrated based upon his illustrious career).

One of the more rare Modano rookie cards and also one of the more expensive the 1990 Mike Modano French OPC RC features Madono celebrating after putting the biscuit in the back of the net. 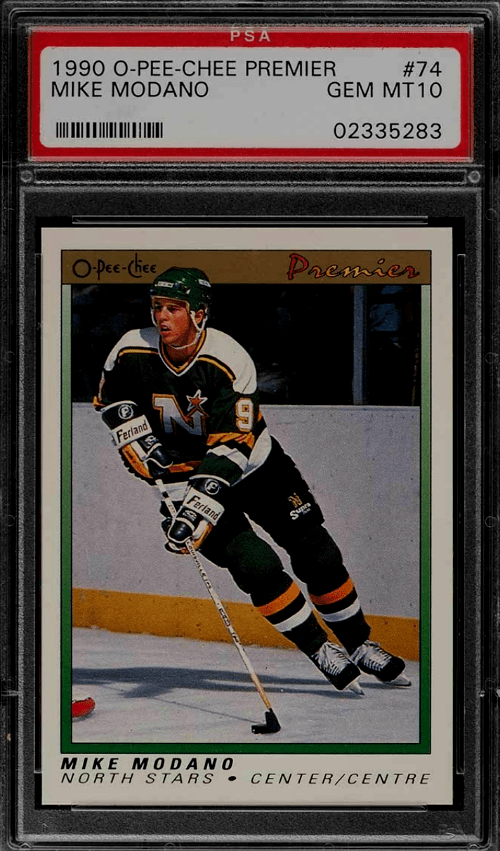 Here we have the most expensive Mike Modano rookie card in the 1990 OPC Premier card.

Numbered 74 the card shows Modano swiftly skating down the rink with the puck on his stick while looking for an open teammate. His name sits in the bottom left corner and the O-Pee-Chee Premier working sits at the very top of the card.

Another super cool Modano rookie card that is a must for value investors. 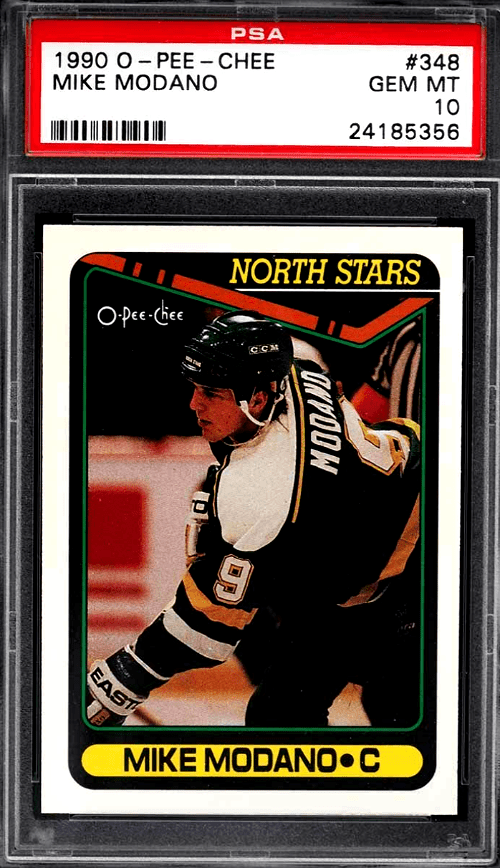 Here we have another O-Pee-Chee rookie card for Mr. Modano. The 1990 O-Pee-Chee Mike Modano rookie card is numbered #348 and shows Modano taking a shot during warm-ups while sporting the classic green Minnesota North Stars jersey.

His name is surrounded in a yellow oval graphic and the words North Stars are yellow in color sitting in the top right corner… another great looking Mike Modano rookie card… do you sense a theme here? 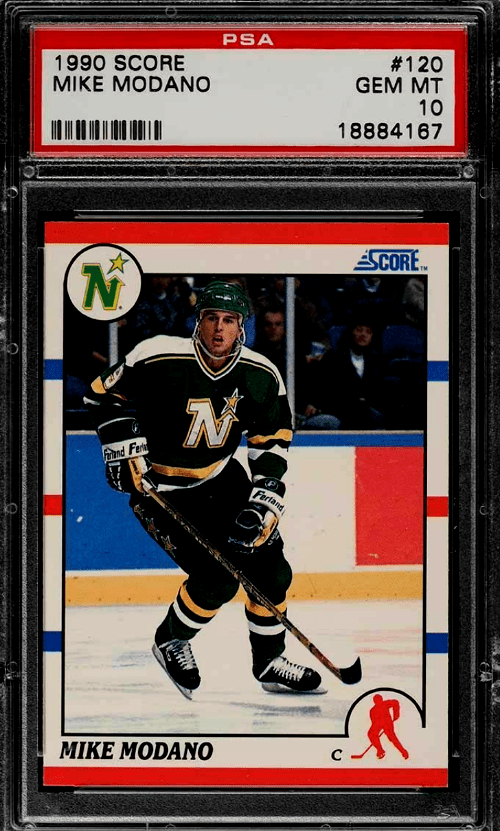 The 1990 Score Mike Modano rookie card is a thing of beauty showing a babyface Modano galloping down the ice while looking up for the puck (his face seems to say why is the puck not on my stick?)

Numbered #120 the card is wrapped in a white with blue and red stripe border with his name in the bottom left corner… a solid investment that won’t cost a ton even at high grades. 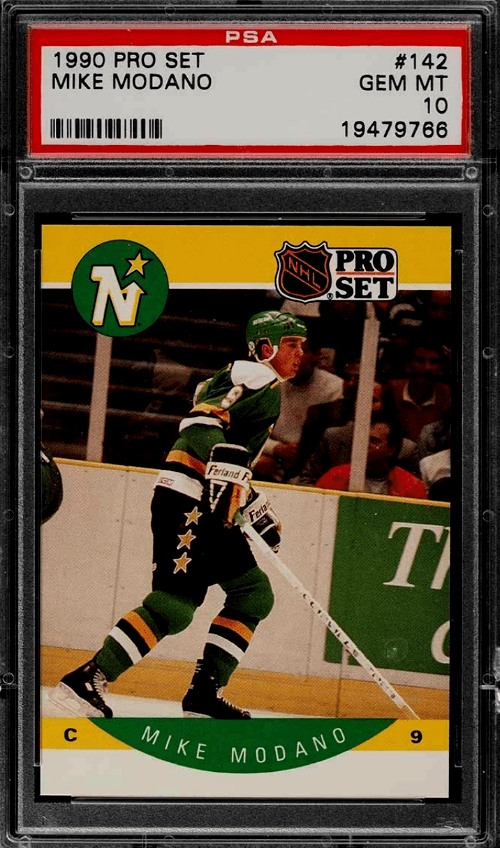 The final card on our Modano rookie card list comes from Pro Set (RIP). Kids who grew up in the late ’80s and early ’90s are very familiar with Pro Set and will most likely bring back a flood of memories of old card shops that have gone out of business since.

The 1990 Pro Set Mike Modano rookie card is actually our favorite RC out of all of them based on looks and nostalgia… and it still makes for a good investment in terms of ROI… buy, buy, BUY! 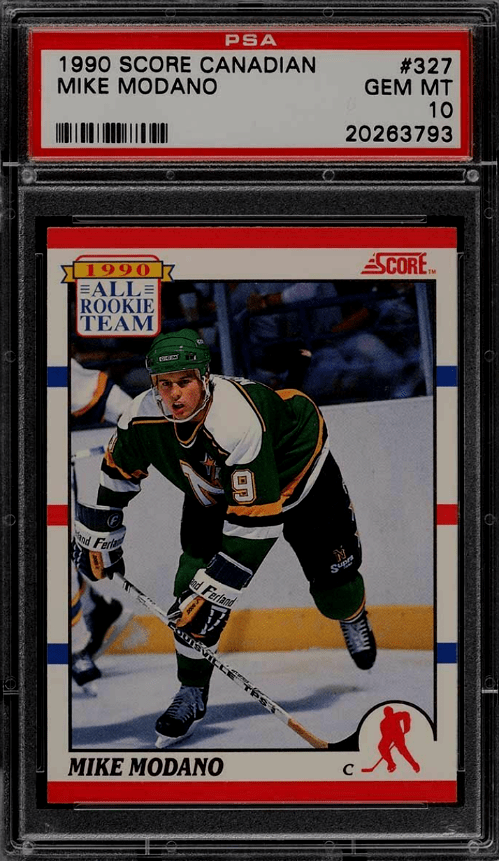 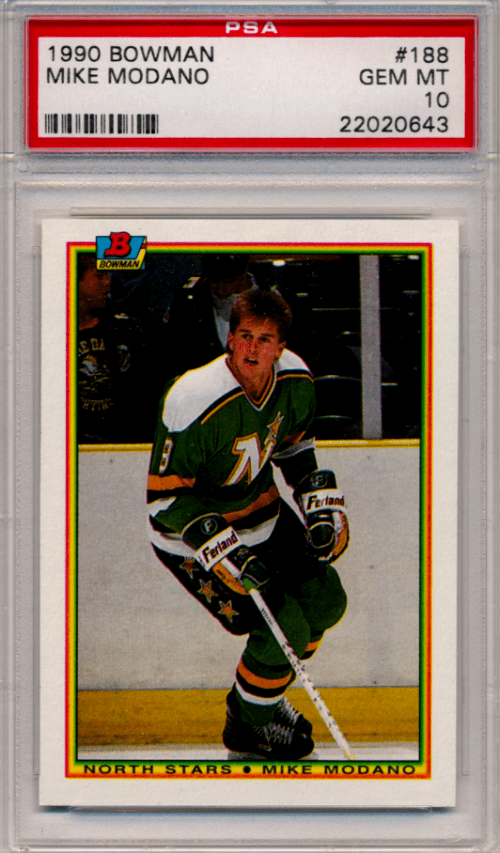 If you are looking to purchase a Mike Modano RC but are afraid of the dreaded buyer’s remorse please email us at advice@goldcardauctions.com for assistance with the purchase.

Mike Madano reminds us of the Greg Maddux rookie card of hockey… don’t ask us why he just does. Like Maddux, Madano rookie cards are very underrated and are a great buy if you’re looking for super low risk with great ROI upside.

In particular, the Mike Modano OPC Premier French RC is a big buy for us, and if you have one or can put us in contact with someone who does please email us at info@goldcardauctions.com with the topic Modano OPC French.

Even if you can’t find the OPC French RC, Modano still has a variety of other great options if you’re looking to pick up one of his rookie cards.