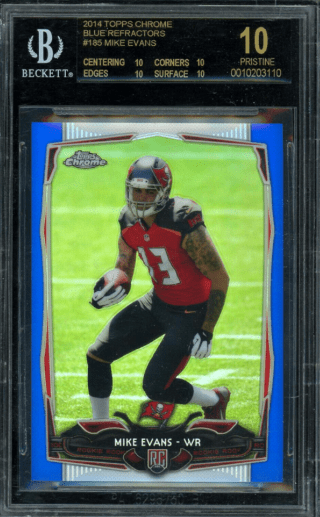 He possesses one of the deadliest combinations of size and skill as his large 6’5” frame allows him to make tough catches over smaller defenders.

Evans was a top ten draft pick and has certainly lived up to the high expectations that accompany that honor through his career so far.

In each of his six seasons in the NFL, he has broken the 1000 yard receiving mark and he has 48 touchdowns through that time period.

Evans is one of the most exciting, young playmakers in the NFL, and with the big news that the legendary Tom Brady (related: Tom Brady Rookie Cards) will be joining his Buccaneers squad, Evans should be excited at the fact that his team is now a legitimate contender.

With Evans being a high draft pick and having the associated hype, there were plenty of rookie cards made of him.

Topps and Panini were the only companies that had all the necessary rights to produce official cards but that doesn’t mean that Upper Deck and other companies didn’t produce versions with Evans in his Texas A&M jersey and the such.

UPDATE! Mike Evans ended up getting his Super Bowl ring with Tom Brady at QB in 2020. This gave his high-end rookie cards a nice bump in value. Gratz Mike! 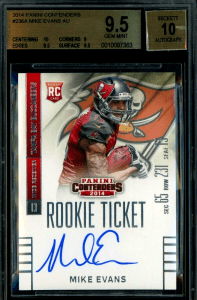 This Mike Evans rookie card was actually produced with three different images, one being the base version and then Panini creating two variations on top of it.

The other version that was produced shows Evans standing and the photo is taken from the front. All of the cards are designed in a very appealing way and have the dominant receivers’ autograph on the front.

These cards were part of an exclusive collection and therefore can be quite hard to find.  For die-hard Mike Evans fans, these may be their goal as the card is one of the rarest made of the rookie. From an investment outlook, the Buccaneers are on the rise and if they can achieve some team success Evans will benefit. 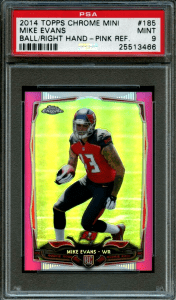 This card was one of the Mike Evans rookie cards produced by Topps and features an image of Evans running in the open field. Topps makes these chrome sets for baseball as well as the NFL version that Evans is featured in.

This set will not break the bank and is a good option for your more novice level collectors to take a shot at pulling their favorite players. The card does have more variations with refractors of different colors that can change the value and are of increasing rarity.

However, the base Topps Chrome Mike Evans rookie card is one that was not too rare to find in packs and can be had for a good price. Unfortunately, this limits the investment upside as the card is too common to reach sky-high prices. 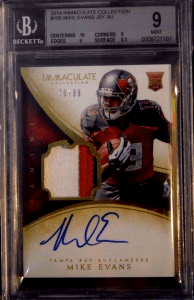 This card features both a jersey piece as well as an autograph and was limited to just 99 copies. The Immaculate Collection is a high-end set produced by Panini where every card is limited to 99 or less.

Rookies are placed at the forefront of the collection and this Mike Evans card is one that is sought after by collectors. If Evans continues to produce as he has and the team starts to achieve some success with all their new additions it would be cards like these that would be great investment opportunities.

The worth of Mike Evans rookie cards should increase this year with Captain America (aka Tom Brady) tossing the pigskin to him.

As always hit us up at value@goldcardauctions.com with card estimates.

UPDATE! Mike Evans ended up getting his Super Bowl ring with Tom Brady at QB in 2020. This gave his high-end rookie cards a nice bump in value. Gratz Mike!

The NFL has been turned upside down by Tom Brady moving to Tampa Bay and Evans will likely benefit by playing with one of the best quarterbacks of all time. If Evans can start to accumulate some team accolades, he will gain fame and recognition and his cards will increase in value.

The Buccaneers are an exciting team and if you buy into the hype than Evans may be a great investment option. He has been one of the best receivers in the NFL and now he will finally get a chance to play with a great quarterback.