Now as his career fades into the twilight it seems some collectors have forgotten just how good Miguel Cabrera was in his prime (ditto for Albert Pujols).

Let’s take a look at the best Miggy rookie cards for your investment dollar! 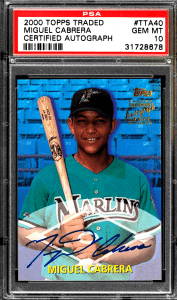 A babyface Miggy is shown in the most expensive of his rookie cards.

The 2000 Miguel Cabrera Topps Traded Certified Rookie Card is numbered #TTA40 and comes with a sweet autograph that sky-rockets the price of this card well into the 4 digits. 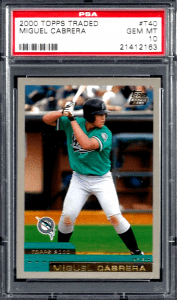 The 2000 Topps Traded Miguel Cabrera rookie card is ideal for collectors looking for a great ROI without spending a ton of cash.

Numbered #T40 the card shows Miggy at the plate looking to jack one out of the park. 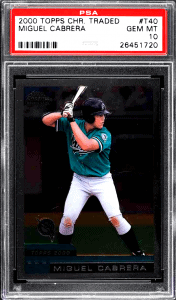 Just a higher-end version of the Topps Traded card shown above. Ideal for collectors looking to fork over a little more money to make more money down the line (the ROI on both cards should be about the same). 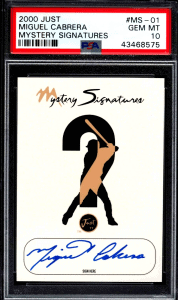 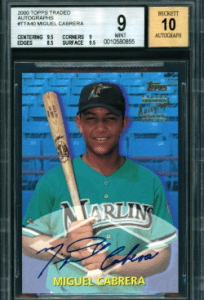 The most valuable Cabrera rookie card is the 2000 Topps Traded Auto. This bad boy sells for 8k to 10k PSA 10 grade.

If you would like an estimated value please email us at value@goldcardauctions.com. Looking to purchase a Miguel Cabrera Rookie Card and need advice?

Email advice@goldcardauctions.com and we can chat.

Miguel Cabrera was an absolute beast at the plate being one of the best offensive players of his generation.

Miggy and Albert Puljos were kings of the MLB for many years and struck fear into the hearts of hundreds of pitchers during their tenor.

You would be crazy not to have a few Miguel Cabrera rookie cards in your baseball card investment portfolio.