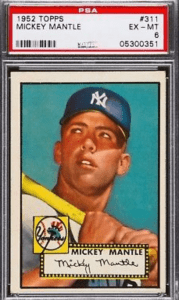 Mantle has a number of popular cards, with the variety largely due to the sheer length of his time at the top.

He’s a 20-time All-Star, and he won the World Series seven times. Mantle still holds multiple records in the competition, including the most home runs, runs, and total bases.

First off, his cards aren’t cheap. Everything from nostalgia to the design has helped to increase prices, with one of his 1952 Topps cards (PSA 8.5) recently sold for $765,000.

Obviously, that’s the highest end of the scale, and you’ll be able to find copies of other versions at more affordable prices.

Here are five of his most popular cards at auction, as well as a rough idea of typical values and what to look out for…

Mantle’s 1952 Topps card is seen as the “Holy Grail” of baseball cards, and even a half-destroyed copy is worth decent money. THIS IS THE MUST-HAVE MANTLE CARD.

Shop for the 1952 Mickey Mantle Baseball Card on eBay

One of the most recognizable cards ever produced, the card shows Mantle with bat in hand, staring off into the distance with a bright blue background.

You can almost smell the apple pie!

There are two slightly different versions of the card, although it doesn’t have an impact on the price.

This means that there were two different print runs, so it isn’t as rare as some of the others we’ll discuss below.

You only have to wait one year if you’re looking for more rare Mantle cards that are worth picking up. 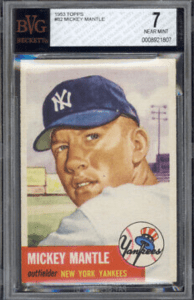 The 1953 Topps card is priced similarly to the 1952 edition, with a zoomed-in image of the player getting ready to step up to the plate.

He’s wearing a Yankees hat, while there’s good detail in terms of shading, as well as the stadium background.

The reverse has Mantle’s batting and fielding record, along with a quiz question and basic info about his recent seasons.

A PSA 1 recently sold for $625, while a 3 went for over $1,600. It’s another iconic image, even if it’s overshadowed slightly by its famous older brother.

This card reeks of vintage 1950’s Americana, with everything from the bright blue sky to the beaming smile of the player.

You’ll find a signature matched up against a green background at the bottom of the card, further adding to the value.

The reverse has batting and fielding stats, as well as a short paragraph discussing how he “brought bubble gum and the tape measure to national prominence”.

It’s a great entry-level option if you want to add a vintage Mantle card to the collection.

It looks slightly faded compared to the colorful options we’ve already mentioned, but the 1957 Topps card is another popular choice at auction.

Mantle is set in his signature pose, ready to swing with his bat in hand. You’ll be able to make out a few obscure details in the background, but it’s a pretty dark card.

You’ll find a complete list of his MLB stats on the reverse, along with a short paragraph discussing why he was picked as the MVP by unanimous decision in 1956.

As for pricing, a 3.5 recently sold for just over $200, while a PSA 8 sold for $6,000. There’s clearly a lot of leeway, and it means that there are options for investors who are working with a smaller budget.

Another iconic Mantle card, this one also sees him ready to hit the ball with his bat in hand. 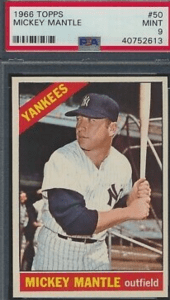 It’s a real photo, and it’s noticeably sharper than the 1957 edition mentioned above.

As with the 1957 card, there’s a stadium and a couple of onlookers in the background.

He missed out on the All-Star team for the first time in 14 seasons in 1966, but that hasn’t caused any real drop in prices compared to others from the same decade.

Considering they were going for $110-$130 a couple of years ago, it’s a clear indication that there’s still money to be made if you’re able to pick them up at the right time.

Mickey Mantle is regarded by many as the greatest switch hitter in baseball history and is one of if not the most popular Yankee of all time.

His top cards consistently increase in value more than any other player who is currently retired (there are a few who are equal i.e Cobb, Jordan, Jeter).

The above Mickey Mantle cards are a no brainer assuming you have the bankroll to afford them (and if not try to get some lesser graded ones).