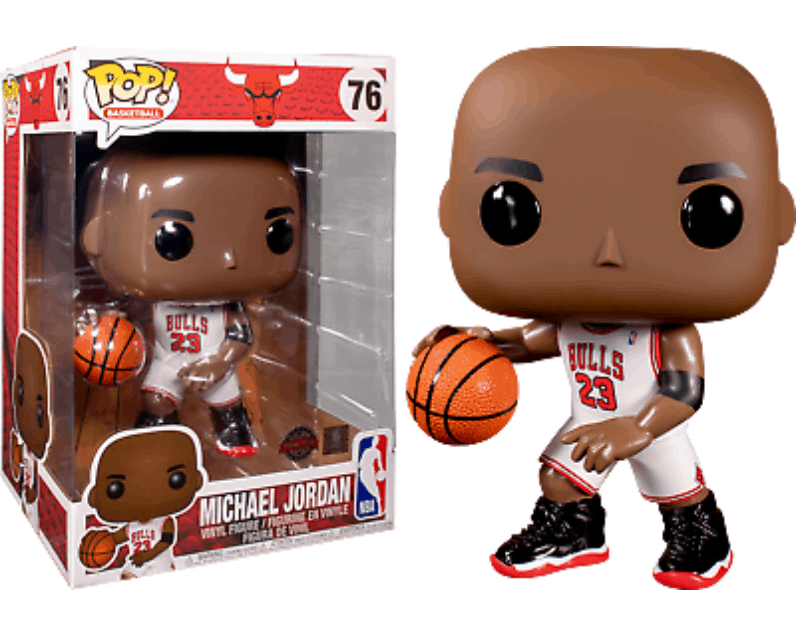 Michael Jordan collectibles are a massive market. From MJ rookie cards to his signature clothing line, anything with his image attached is sure to make money hand over fist.

Even The Last Dance was little more than an extended advert for the player, failing to pay much attention to the teammates who helped to propel him on the way to stardom.

The latest collectible Jordan craze involves Funko Pops. What are they, and are they worth anything? Here’s everything you need to know about the figurines, including three of the rarest options and a look at their potential as a future investment piece.

What is a Funko Pop Vinyl?

Creator Mike Becker founded Funko in 1998, aiming to make various low-tech, nostalgia-themed toys. After struggling in the early years, they’ve gone on to create roughly 20,000 different figurines featuring some of the biggest franchises in history. (They’ve also released a number of niche sets along the way, helping to build a dedicated fan base of collectors.)

Funko’s Pop! Vinyl products are figures modeled in a simplistic style and were first revealed in 2011 at the New York Toy Fair.

It’s hard to say exactly why Funko Pops are so collectible. On the face of it, they’re a reasonably basic toy, relying on distinctive clothing, accessories, and hairstyles to be able to identify the famous figure. For example, it’s easy to recreate Iron Man’s famous suit, while a star like MJ needs a bald head and a 23 Bulls jersey to ensure that he’s recognizable.

Popular: The 13 Most Expensive Air Jordan Shoes I Can’t Live Without

Despite the simplistic design, they’ve continued to gain popularity, while there are a number of Funko Pops that have started to see their values increase. Another thing is, they’re meant to be left unopened in the box if you’re aiming to invest, just like expensive Star Wars toys from the ‘80s.

However, they look pretty good displayed in the box, and it’ll keep them safe from any damage. The Jordan sets all have movable heads, which is typically the easiest way to tell if it’s a real Funko Pop or not.

Are Michael Jordan Funko Pops Worth Anything?

The truth is, any Michael Jordan collectible is going to be snapped up by ravenous fans who are hoping to preemptively own a piece of the next big thing. As the base figure only retails for $11, it’s not difficult to grab a couple if you’re planning to hold onto them for a while.

MJ has a total of 10 different figures in the Pop! Basketball set, while exclusives only serve to excite both potential investors and collectors. The figurines may look similar, but different shoes and jerseys help to separate them from each other.

Not all Jordan Funko Pops are equal, and some are already beginning to speed away in terms of value and popularity. As you might expect, they’re special editions, while one also comes packaged with a stand.

Look out for the condition of the box as well as the statue itself. Any dents or pings will lower the resale value, while the same goes for any retail stickers which have yet to be peeled off. The latter can lead to scratches or any number of superficial issues.

We’ve looked at recent auction data to bring you a list with three of the very best Michael Jackson Funko Pops available right now. Known as the Pop! NBA – Michael Jordan collection, there’s a decent selection to choose from. 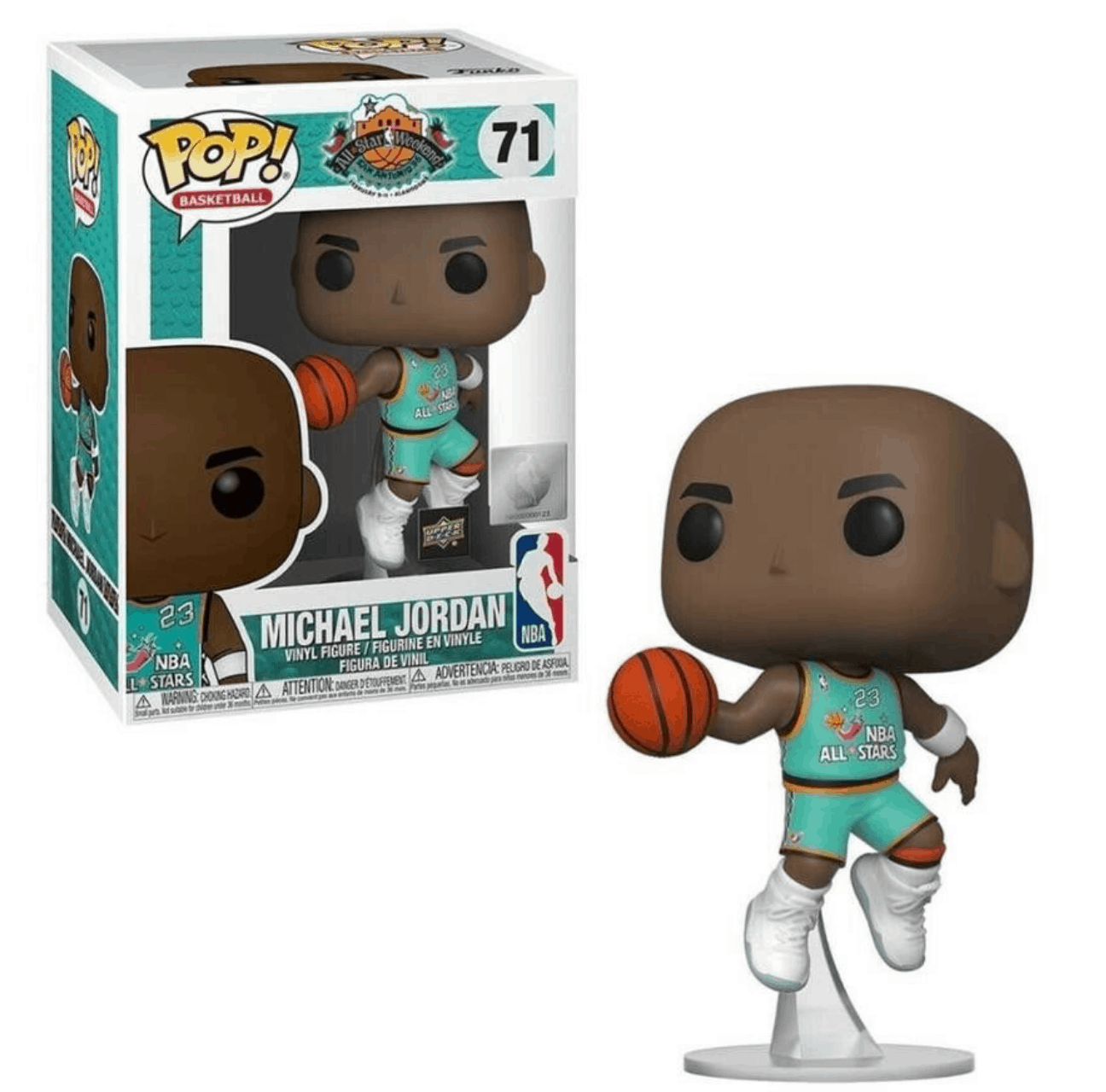 The most popular MJ Funko available, the Upper Deck #71 focuses on the 1996 All-Star Game. Jordan has a ball clasped in his right hand, while he’s leaping through the air in a signature pose thanks to the addition of a small see-through stand. (A similar stand is used for Bruce Lee, and it works well.)

He’s clothed in a green All Stars kit, with his number listed as 23. It’s already hitting low three-figure fees and looks to be the frontrunner in terms of future value. 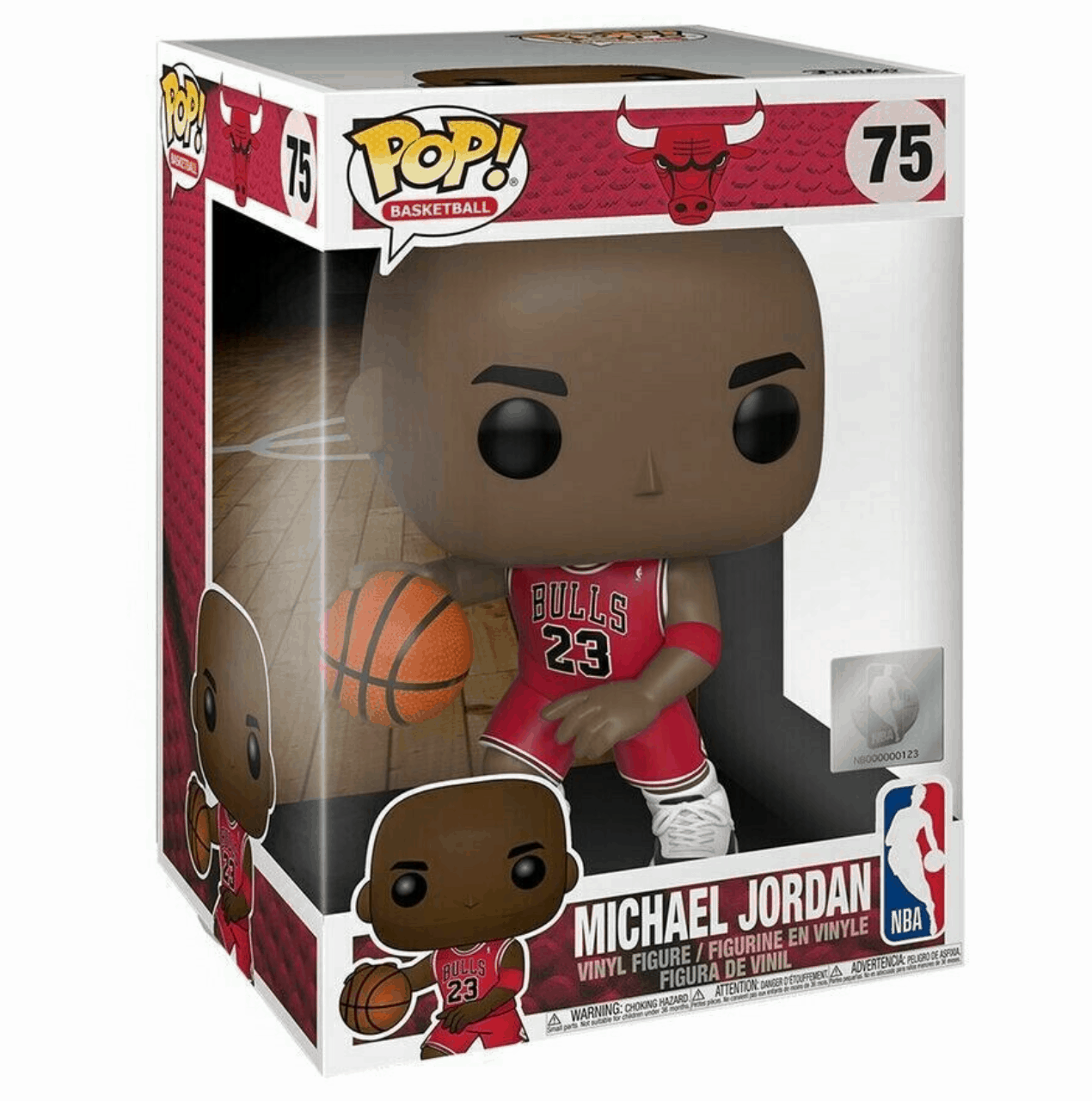 A 10″ ‘Super-Sized’ figurine, this collectible is available in both a Red Jersey and a White Jersey variation, representing the color of his respective Chicago Bulls kits. As with the All-Star statue, there’s a ball clasped in one hand, while he’s wearing a band on the other arm.

They’re not lying about the size, as it’s massive in comparison to a standard-sized pop. White Home Jersey is the one to look out for, as it’s a special edition that was distributed via Foot Locker early in 2019. It’s beginning to creep up in price, so it’s worth keeping an eye on. 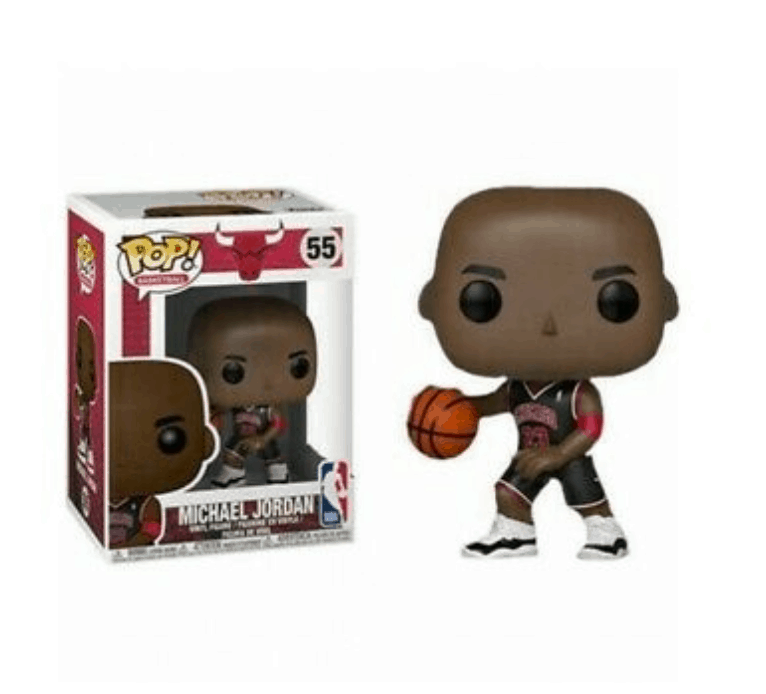 The final collectible to make the list is also the least expensive of the trio. It’s essentially a smaller copy of the super-sized statue discussed above, but this time he’s wearing a black Red Bulls jersey.

It’s another exclusive, available via Fanatics. (When I checked their online store, it was out of stock, while they note that the product is currently unavailable.) 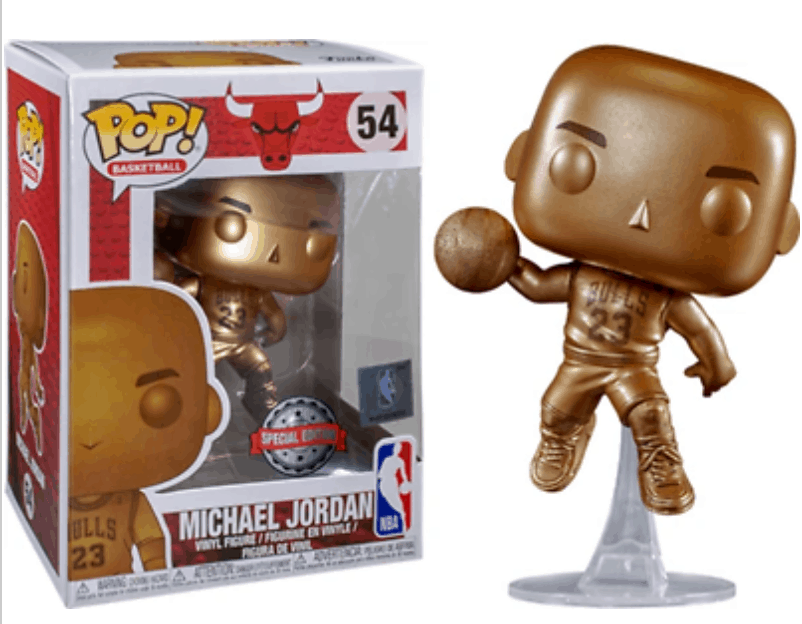 The Michael Jordan Funko Pop Bronze is by far our favorite of all the MJ Funko Pop collector items… we like it so much we just bought one!

The Bronze MJ Funko Pop displays Jordan covered in Bronze from head to toe with the rock in his right hand… a stunning collector’s item that can be had for a few ten dollar bills… a great long term investment!

As I write this, I’m being stared down by a Funko Pop that was given to me years ago, which now sits on my desk. Having been aware of the brand for a while, it’s not surprising to see how much they’ve grown over the past decade, becoming one of the better-known collectible manufacturers.

From Comic-Con appearances to an ever-increasing list of products, it was only natural that they’d eventually begin producing statues featuring some of the biggest sports stars in history.

It’s hard to do better than Michael Jordan, and they’ve already featured some of the best moments from his career. With 10 in total, there’s still time for a Space Jam edition or a baseball version with bat in hand. If you can grab a couple at a good price, it could be an investment opportunity with the potential to double in value over the next few years.

Price-wise, you might expect them to stay budget-friendly, but there is some proof that a rabid fandom and rare models can cause a bidding frenzy.

Take a rare Star Wars Shadow Trooper that was released as a San Diego Comic-Con 2011 Exclusive. Considered to be the most expensive Funko Pop ever, it’s estimated to be worth roughly $1,300 today.

There is a chance that the original MJ set could eventually reach that price, but it could take over a decade at the very least. It’s also worth remembering that the Shadow Trooper was an exclusive released in their first-ever year as a retail product. However, if you’re buying it to display, it’s a cheaper Jordan figurine than many others, and they are charming in their own way.

How many Funko Pop Michael Jordan?

At this time there are more than 13 different types of Michael Jordan Funk Pop figurines.

How can you tell if a Funko Pop is rare?

You can tell if a Funk Pop is rare by the “Chase” sticker on it as that is a signal it is a lot rarer than a regular Pop Vinyl.

Will funko Pops be worth anything?

Funko Pops future worth is anyones guess but we feel there will be a moderate market for Michael Jordan Funko Pops in the decades to come.