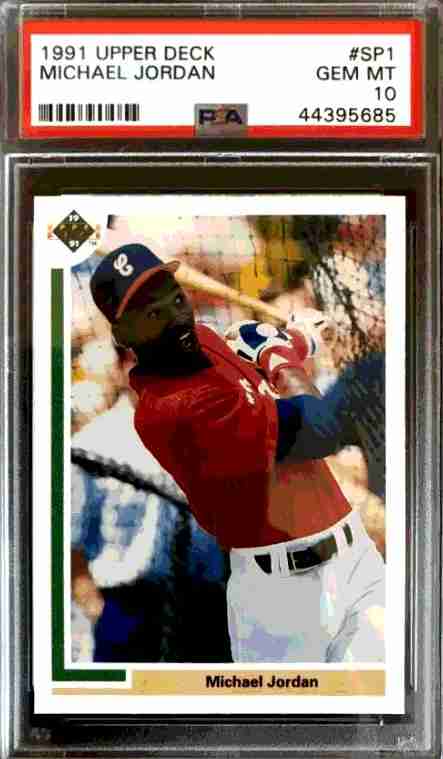 After winning three NBA championships in a row, Michael Jordan made the shocking announcement that he was retiring from the NBA and was going to start playing baseball.

The move shocked the sports world, but soon fans became accustomed to seeing Jordan on the diamond. Jordan joined the Chicago White Sox system and would play for the AA Birmingham Barons for one season.

Jordan would never take a Major League at-bat but still, his ability to transition into AA baseball and still provide some value to his team is remarkable. Coaches and fellow teammates have since commented on Jordan’s work ethic and improvement, some even saying that they believe if he had kept playing, he could have progressed further. Some have even publicly commented that they think Jordan could have made it to the MLB had he kept working out and training. We know he certainly had the competitive spirit to do so.

There were plenty of baseball cards made for Jordan’s brief exploration into the sport (including one made before anyone knew he would be trying baseball which we will touch on later) and it can be difficult for investors to discern where the value is.

These baseball cards will never be as valuable as Jordan’s rookie basketball cards, yet that doesn’t mean that investors should ignore them completely and we think they are some of the more undervalued cards in the hobby. With some shrewd thinking, collectors can stay ahead of the competition and find advantages in the market that they can use to make money and cash in. On the other hand, some collectors may just want a Jordan baseball card for the novelty of something different to look at in their collection.

Jordan would announce his return to the NBA with a simple two-word press release: “I’m Back”. This would conclude his minor league baseball career, one that was filled with ups and downs for the superstar athlete. Of all the things that came out of Jordan’s brief baseball career, his baseball cards and memorabilia maybe some of the most interesting for collectors but it can be hard with so many options.

We have taken the large list of Jordan baseball cards and limited it down to the top five that investors should look to own and hold in their collection. 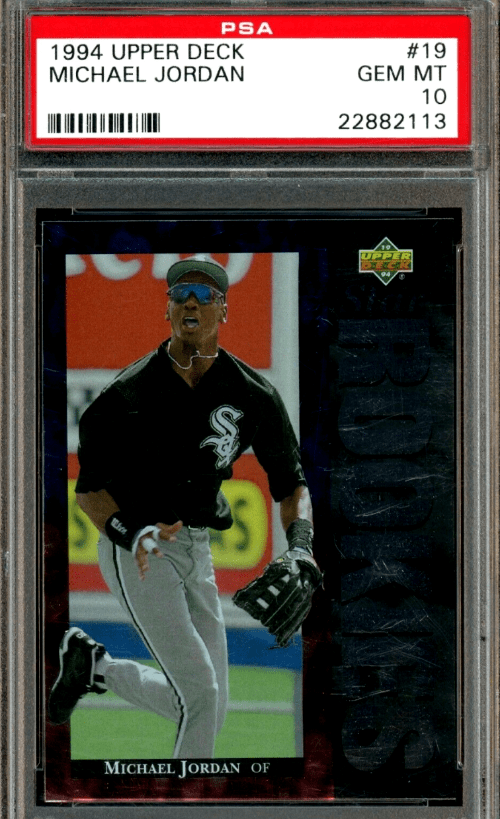 This card shows Jordan running in the outfield as he looks towards a flyball in the sky. The chain around his neck is flying as he gets his glove ready to make the catch. This card came with an “Electric Diamond” parallel which can be found for a reasonable price.

These cards are not about to shoot up in value all of a sudden, but they do make an interesting piece of a collection and are sure to at least hold their values. 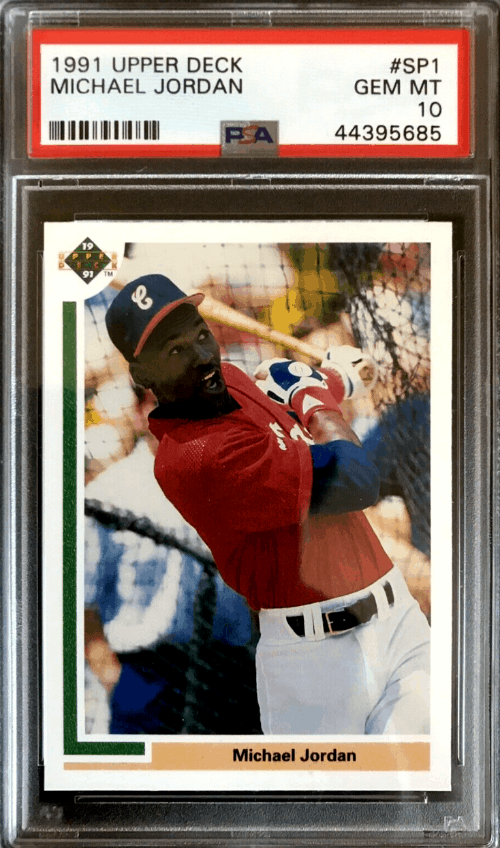 The 1991 Upper Deck Michael Jordan baseball card is a very special card. The first thing that will stand out to collectors is the year it was made, 1991, three years before Jordan decided to go play baseball.

This card foreshadowed Jordan’s move to baseball and turned into a prophetic card. Collectors may want this card for that reason, and it features Jordan taking batting practice with no team’s logo on it. 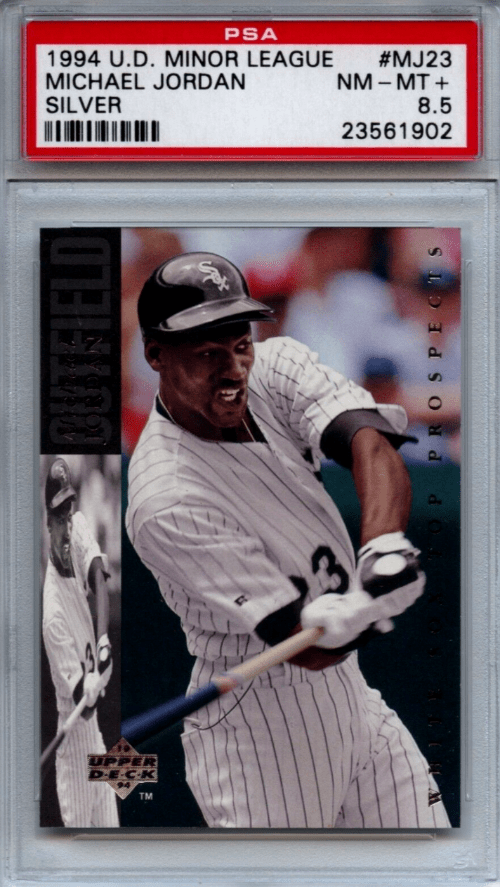 This card is the same as the one in the 1994 Upper Deck Minors set but has the unique printing of “#MJ23” on the back. The card also has a gold parallel that was limited to fifteen thousand copies.

This one pictures Jordan taking a swing of the bat, his number twenty-three clearly visible on his jersey. 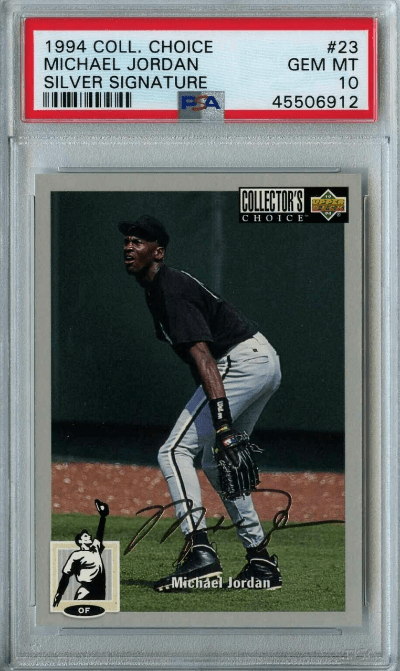 This card was actually a basketball release but pictures a photo of Jordan playing baseball on the front. Jordan has his knees bent, looking for any flyballs that may come his way. On the back of the card, there is a photo of Jordan mid golf swing, right above his NBA stats.

The multi-sport nature of this card makes it an interesting one for casual collectors and serious investors alike. 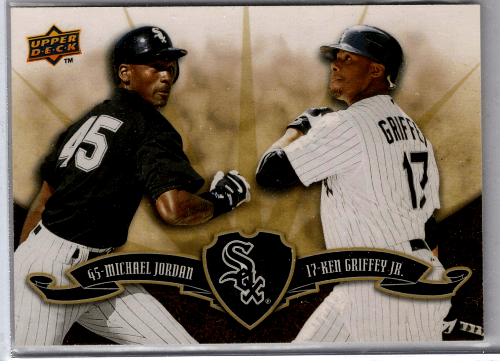 This is a very unique card as it pictures two of the best players from their respective sports. On one side of the card is NBA legend Michael Jordan in his full baseball gear while on the right is MLB legend Ken Griffey Jr.

This card was a limited short print and thus can be very hard to find. The fact that the pictured players are some of the best to ever grace their sport only makes the card more desirable for collectors everywhere. Investors should look to this card as a higher ticket item that could potentially see higher returns. 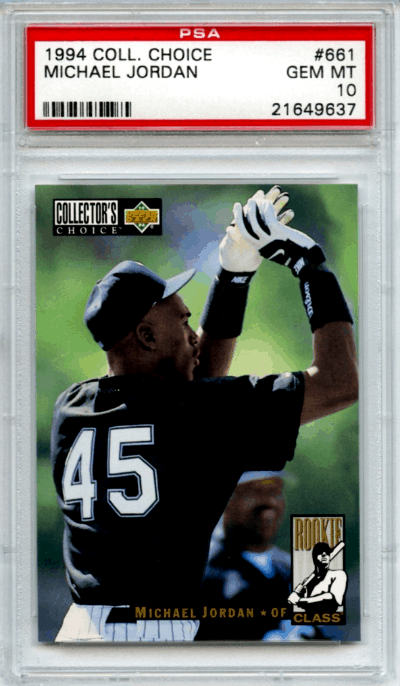 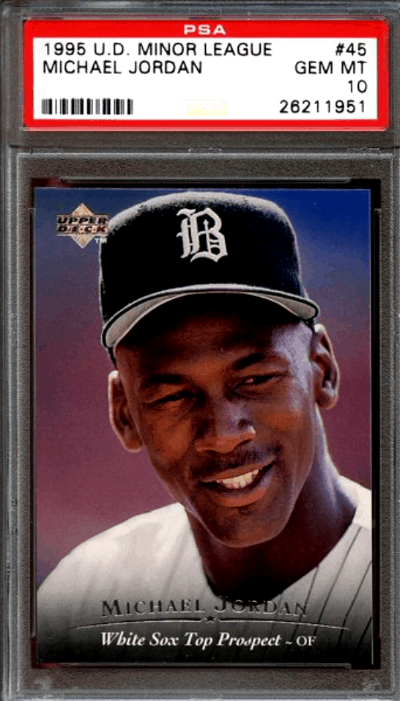 The most valuable Jordan baseball card is his 1991 and 1994 Upper Deck Cards.

The 1994 Michael Jordan Electric Diamond Upper Deck Baseball Card is also up there in the top 3.

If you have an MJ Baseball Rookie Card and would like a price estimate please DM us on the Gold Card Auctions Facebook Page.

Michael Jordan is one of the biggest names in all of sport and thus he will always make a great investment, possibly one of the best in the entire industry. While his baseball cards will never have the same demand as his basketball cards, they do offer a novel option that casual collectors would love to have in their collection and investors can still make money off of.

Jordan’s baseball career never turned out the way he hoped, but it did lead to many memorable moments and added an interesting chapter to his story. Without his foray into baseball, Jordan’s second half of his basketball days may not have been the same and we may not have been treated to the greatness that we became accustomed to.

Investors could look at other options if they wanted that big hit that could skyrocket in value, but there is something special about owning a Jordan card, and anyone that does own one will explain that his cards carry a special aura. The baseball cards act as a novelty item, but only casual collectors would overlook the potential value that could be found with these special cards.

Take note of this list and use it to find the special cards that will help you get a leg up on the competition. Smarts will rule above all when it comes to the smaller margins that these cards offer and staying informed is the way to succeed