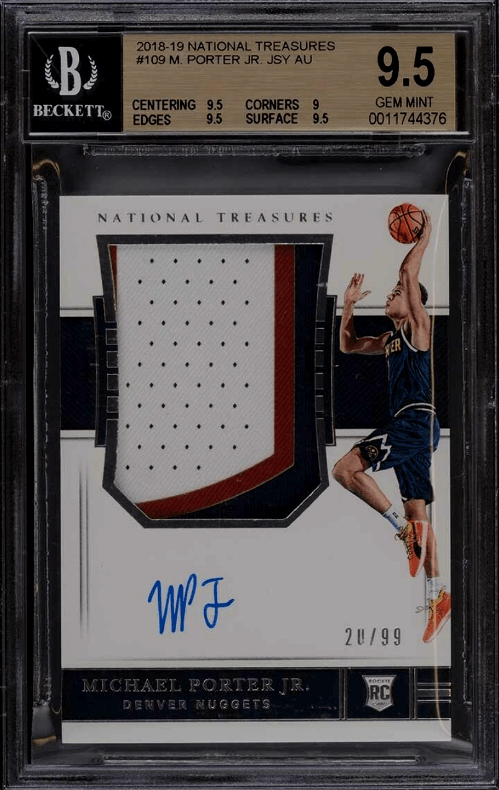 While MPJ was drafted in 2018, he didn’t make his debut until the 2019-20 season. The reason for the delay was a back surgery that kept him out for an entire year.

During the 2019 NBA playoffs, Porter Jr. went a long way in proving his worth, averaging 11.4 points per game to go along with 6.7 RPG.

This card is a must for anyone looking to invest in Michael Porter Jr. rookie cards.

The Porter Jr. Prizm RC is available in a variety of parrels and features Porter Jr. leaning in for a jump shot. His name and team name are placed in the bottom left corner while the RC logo sits in the top left corner.

Numbered #32 the back of the 2018 Michael Porter Jr. Panini Prizm Rookie Card reads “With a stroke so graceful it looks like he could drain jumpers in his sleep, Porter is one of the NBA’s top-ranked prospects. He was the 14th overall pick in the 2018 NBA Draft and quickly impressed the Nuggets staff with his shot-making ability. Fans in Denver are thrilled at the thought of watching him sizzle for years to come.”

The 2018 Michael Porter Jr. RC Auto Panini Contenders Rookie Ticket will set you back a couple of hundred dollars which is a steal based on how good this kid is.

The back of the card reads “Porter saw action in only three contests at Missouri, but that didn’t deter NBA team’s interest in him at the 2018 NBA Draft. One of the most talented players in the class, he was tabbed by Denver with the 14th selection, adding another piece to the squad’s young core that includes Jamal Murray and Nikola Jokic.”

This card comes from the National Treasures set, which has become very popular with basketball card collectors in recent years.

It has a photo of Porter Jr. in the blue Denver Nuggets jersey, two hands on the ball, and a jersey patch below that.

The words National Treasures are imprinted on the top of the card in gold lettering, adding to the premium feel of the product.

On top of that, the card was limited to only ninety-nine copies, which will help keep the price up due to its low quantity… if you have the wallet for it buy!

We love the Court Kings rookie cards and the Michael Porter Jr. is no exception.

The card is numbered #MPJ and features Porter Jr. gathering the rock for a pass or possibly a jump shot.

His name and team name (Denver Nuggets) are centered at the bottom while the words “HEIR APPARENT” are plastered at the top. 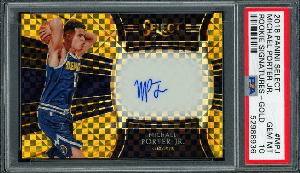 Many MPJ rookie cards can still be purchased for reasonable prices as he is still early in his career. As a result, there are many great opportunities to get good value.

Looking to purchase a basketball card? Need help? Email us at advice@goldcardauctions.com

Feel free to buy a few Porter Jr. RCs and thank us later when he is dropping 20 plus per game… fingers crossed!

We consider Porter Jr. a top 5 player in the 2018 NBA Draft class and could excel for years to come in the NBA as long as he can avoid nagging injuries.

It’s unlikely he surpasses Luka Doncic or Trae Young from that draft year, but he could certainly fall in the top 5 or 3.

Unfortunately, injuries have been a problem for him earlier in his career. Early in the 2021-22 NBA season, MPJ required the third back surgery in his career. His first was in college, and his second came shortly after getting drafted.

That surgery limited MPJ to nine games in the 2022 season and delayed further development. Still, we feel confident that MPJ is set for a big breakout in the coming seasons.