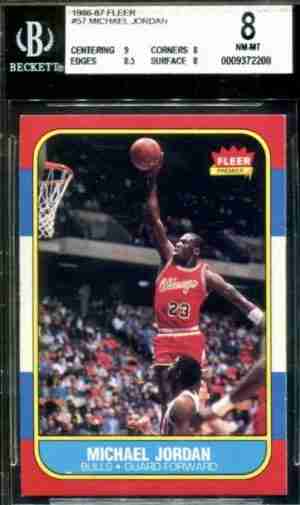 After dominating the sport for more than a decade, Michael Jordan is routinely considered the greatest basketball player and athlete of all time.

Deciphering the Greatest Sports Card of All Time

Dating back nearly 150 years, the sports card collecting landscape is rich in history. This hobby has captured the attention of collectors worldwide who seek cards of a significant era, highly-accomplished players, and even defect cards.

For argument’s sake, we’ll break down several iconic cards from over the years based on specific criteria. We will cover athlete popularity, Hall of Fame voting, card significance, search engine results, and available cards for sale. Additionally, we’ll include watchers on eBay and population reports while disregarding actual card values.

The legendary Honus Wagner was active from 1897 to 1917. Through three seasons with the Louisville Colonels and 18 years with the Pittsburgh Pirates, Honus Wagner became one of the MLB’s most prolific baseball players.

After Wagner’s retirement, he stayed close to the game. Wagner coached the Pittsburgh Pirates for 39 years, mainly as the team’s hitting instructor. Wagner was inducted into the Baseball Hall of Fame in 1936 with 215 of 226 votes, or 95.13%.

Wagner uprooted his tobacco card from production due to its negative messaging towards children or perhaps for royalty purposes. While we may never fully understand why he did this, his T-206 card became remarkably limited as a result.

In searching for Honus Wagner’s T-206 card, you will discover 298,000 results for his iconic card from the 1909-1911 set. You will also find 300 listings for Wagner’s card through an eBay search, though many are various other Wagner cards or reprinted copies.

The two most-watched Honus Wagner cards on eBay have 110 and 31 watchers, though only one features his T-206 card. Of all of the cards we’re evaluating, Wagner’s T-206 card possesses by far the lowest population.

With approximately 200 cards ever produced, there are only 50 copies that have surfaced in over 100 years.

Making his MLB debut on August 30, 1905, Ty Cobb had an exceptional 24-year career. Cobb played his first 22 seasons with the Detroit Tigers and the final two seasons of his career with the Philadelphia Atlantics.

Like Wagner, Ty Cobb was also a coach. He managed the Detroit Tigers during his playing career, from 1921 to 1926. Ty Cobb received 222 of 226 Hall of Fame votes, earning 98.23% of voters’ recognition and ranking him with the 7th highest voter percentage in the Baseball Hall of Fame history.

Emerging from the same iconic set as Wagner is none other than Ty Cobb’s 1909–1911 T-206 card. Cobb’s card appears in four variations: green portrait, red portrait, bat on shoulder, and bat-off shoulder. While the red portrait is the most populated, it remains one of the most sought-after baseball cards.

According to PSA’s population report, Ty Cobb has 1,813 graded cards from the memorable set with a red back.

Griffey Jr. spent 13 seasons with the Mariners, nine with the Cincinnati Reds, and one season with the Chicago White Sox. On January 6, 2016, Ken Griffey Jr. was inducted into the Baseball Hall of Fame with 99.32% voter support, receiving 437 of 440 votes.  At the time of his induction, Griffey received a higher percentage of votes than anyone in the Baseball Hall of Fame history.

Starring an extremely high population due to the Junk Wax Era, Griffey’s celebrated1989 Upper Deck rookie card has a total PSA population of 83,423. Of the 83,423 cards, 3,983 received a PSA 10, approximately 4% of all submitted cards.

Billy Ripken is, unfortunately, more recognized for being the younger brother of Hall of Famer Cal Ripken Jr. and for his 1989 Fleer error card than his baseball accomplishments.

Through 12 MLB seasons, the journeyman played for the Orioles, Texas Rangers, Cleveland Indians, and Detroit Tigers. Unlike the other mentioned players, Ripken’s baseball performance didn’t obtain Hall of Fame contention. Regardless, his card from 1989 Fleer goes down in history.

Billy Ripken’s 1989 Fleer card lives as one of the more well-known sports cards and the most noteworthy error card. The knob of Ripken’s bat features the FF error, which made it quickly become one of the most distinguished cards of the 1989 Fleer set.

Ripken’s error card has several variations. These include a black box, a black scribble, scribbled out in white, whited out, and of course, the actual FF error. Error cards prevail as part of a significant niche of the hobby. Therefore, Billy Ripken’s FF error card stands as the most widespread error card in the sports card collecting world.

Of all Billy Ripken’s error variations, the highest population of Ripken’s card features the FF error, with a PSA population of 8,001. Considering Ripken’s 8,001 cards in PSA’s population, 1,982 cards obtained a PSA 10, roughly 25%.

Michael Jordan is one of, if not the most recognizable athlete of all time. His NBA talents extend way beyond the basketball court, as the Jordan brand is one of the most successful athletic brands of all time, surpassing $3 billion in sales. After 15 iconic NBA seasons, Michael Jordan was inducted into the Naismith Memorial Basketball Hall of Fame in 2009.

The Verdict: Is Michael Jordan’s 1986-87 Fleer Card the Greatest Sports Card of All Time?

On top of being a member of the Naismith Memorial Basketball Hall of Fame and the most celebrated player in league history, Michael Jordan’s 1986-87 Fleer card is the greatest sports card of all time.