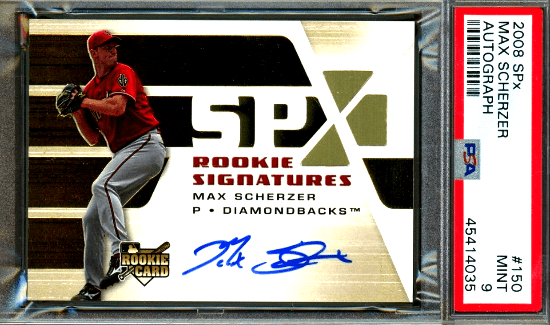 There is no shortage of Max Sherzer rookie cards to choose from as he was a first-round pick by the Arizona Diamondbacks.

Read on to learn which ones are your best bets when investing your hard-earned money.

His first few years in the league were meh… but boy did he take off in 2012 with the Detroit Tigers! He went 16-7 with a mind-blowing 231 strikeouts and posting a solid 3.74 ERA.

The next year (2013) he won the AL Cy Young and the value of Max Scherzer rookie cards exploded.

Here’s a rundown with three of the best Soto rookie cards to look out for, along with some rookie card investment advice. 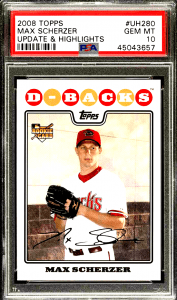 The Max Scherzer Topps Update rookie card is a great investment option for those looking to toss some coin at Mad Max rookie cards.

Numbered #UH280 the card shows Scherzer posing in front of a boring brick wall (?) with a face that screams “pass me the chronic”… not the best-looking photo but not the worst either.

This card is extremely popular at high grades on eBay and is sure to fetch double-digit bids if auctioned off… this is a mid-range value Mad Max rookie card (high-end for gold and black parallels). 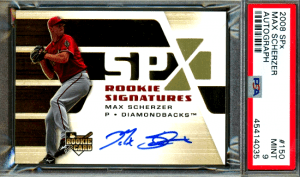 The Scherzer SPx rookie card is ideal for investors looking to spend a little more to acquire a rare Mad Max rookie card.

Numbered #150, the card shows Max in the midst of throwing the baseball down the pipe for a called strike 3.

Produced by Upper Deck, the 2008 Max Scherzer SPx rookie card is a solid buy and is considered a mid-range to the high-end rookie card in terms of value. 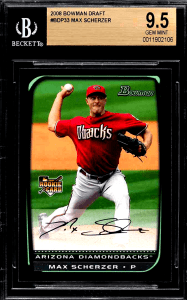 Here is a Scherzer rookie card for the hobbyist with a smaller bankroll as the card at high grades (i.e. PSA 10/BGS 9.5) will be under $100.

Numbered #BDP33 the card shows Max unloading on a batter… his face seems to say “strike 3 mother…” well, you get the idea. 🙂

Thinking about buying a Max Scherzer rookie card on eBay?

Email us at advice@goldcardauctions.com to get a second opinion (or hit us up via DM on the Gold Card Auctions Facebook Page!). 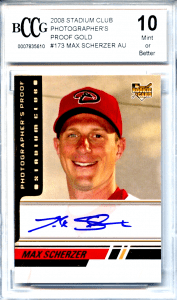 Mad Max ranks right up there with Justin Verlander and Clayton Kershaw in terms of best pitchers in the last 10 years or so.

What really helped Scherzer was finally winning a world series ring in 2019 as up until then he had been limited in playoff success.

As Scherzer fades into the twilight of his career, his numbers will get less shiny and people may forget just how good he was… but he will always be one of the best pitchers of his generation.

We like the Topps Update Scherzer rookie card as a long term investment.