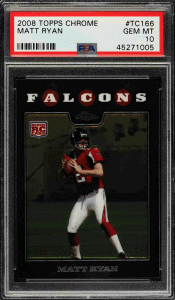 Matt Ryan was drafted by the Atlanta Falcons with the 3rd overall pick in the 2008 NFL Draft and is one of the most underwhelming Quarterbacks of all-time (along with his rookie cards).

Matt Ryan is the epitome of boring and overrated…and it’s a shame because the top 3 Matt Ryan rookie cards happen to be really nice looking.

Best Investments? Peyton Manning Rookie Cards are on fire and will be FOREVER

Were not going in deep with Matt Ryan rookie cards simply because we don’t feel there is much want for his cards BUT we do like to include cards we are not fans of otherwise GoldCardAuctions.com would be one big fluff piece. 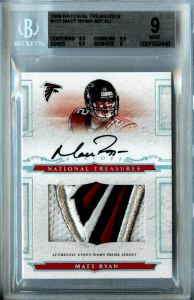 BIG BANK HANK owns this card but we don’t nesscarlly think you should.

Although Ryan is overrated as the day is long this is actually a pretty good looking card.

The card features a photo of Ryan along with the Falcons logo at the top of the card PLUS an auto and patch with an all-white theme.

Overall a nice looking card but were still not buying.

Looking for a great investment? Check out the top Tom Brady Rookie Cards

If your looking to toss a few dollars at Matt Ryan rookie cards on the long shot that he wins a Superbowl in the twilight of his career this would be the one.

Numbered #TC 166 the card shows Ryan dropping back in the pocket looking to hit a wideout over the middle… knowing Ryan the play most likely resulted in a SACK! 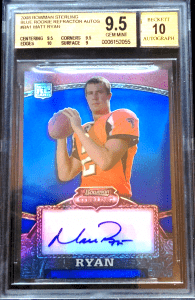 Another cool looking card we would otherwise recommend if not for the player.

Numbered #BS1 the card shows Ryan posing for the photo while gripping the football in drop-back pass format.

Ryan rookie cards are priced correctly for the most part.

Include a few photos and give us 48 hours. 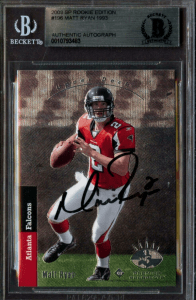