The best thing that happened to Matthew Stafford’s rookie cards was when he picked up the phone and was told he was traded to the Los Angeles Rams. 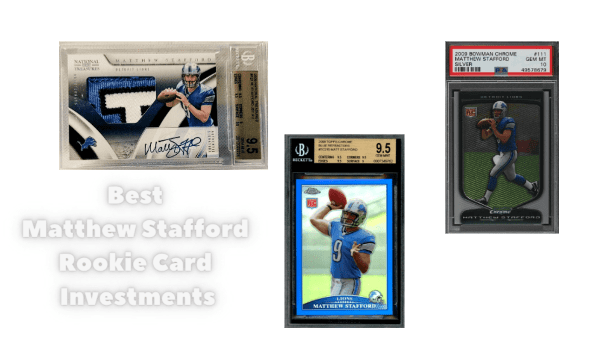 The Detroit Lions drafted Matthew Stafford with the first overall pick in the 2009 NFL Draft. The gunslinger from Georgia displayed rare arm talent and production to match to warrant the selection.

Stafford’s rookie season was typically rough for a first-year quarterback, as he threw 20 interceptions and 13 touchdowns, compiling 2,267 yards.

Detroit Lions rookies often struggle, just as Detroit Lions veterans often do. But Stafford has proven his mettle as an NFL quarterback, and his rookie cards have appreciated similarly. 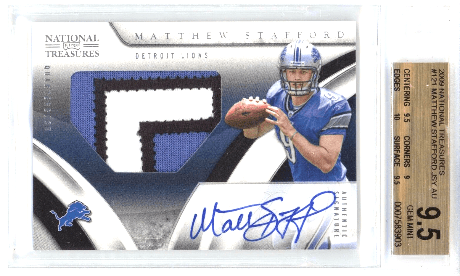 Panini National Treasures are among the most reliable sets in the trading card world, mainly when the PNT features a Pro Bowl-caliber quarterback.

Stafford’s 2009 PNT Patch Auto RC #121 features the quarterback looking almost like a Madden character, ball held horizontally at chest level as he stares downfield. The player patch is a prominent feature of the card, dominating the mid-left portions of the card.

With several eye-catching features and a dizzying array of blue, white, grey, and black features, it is easy to miss Stafford’s autograph. It is inscribed upon a translucent nameplate beneath Stafford’s image.

This is not the cleanest design you’ll find from Panini National Treasures. The presence of the autograph, player patch, and top-tier quarterback as a rookie cement its value, though. 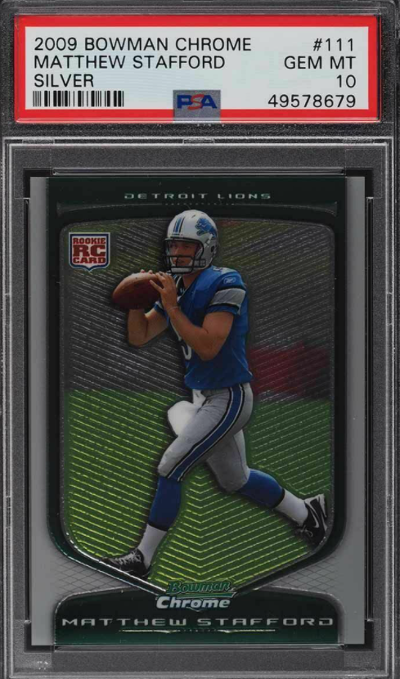 Nobody will accuse Bowman of going above and beyond when designing the 2009 Matthew Stafford Bowman Chrome RC #111, but a bit of restraint never hurt anyone.

The chromatic card features Stafford casually rolling to his right, about to release a pass. He wears the 2009 Lions outfit, royal blue uniform, and silver pants, including matching blue trim. Stafford holds the pigskin just beneath his chin, displaying the mechanics that made him the top pick in the 2009 NFL Draft.

Bowman let the image of Stafford do the work with this one. A series of embossed lines form a slight “V” formation immediately behind Stafford’s image.

The immediate chrome backdrop takes the shape of a shield. Surrounding that chrome background is a subtle border, transitioning from a slight green tint up top to red and black at the bottom.

Like Stafford’s career, this card is not too flashy, but undeniably solid. 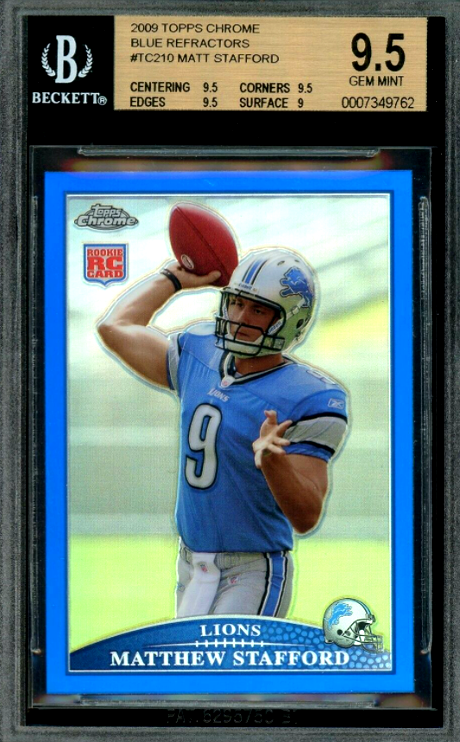 The specific way that Topps deploys its Chrome effect maximizes the eye-catching appeal. Stafford’s image, which features the quarterback’s over-the-top delivery (as opposed to his frequently used side-arm release), pops in front of the chrome background.

Topps’ design makes the card feel like a portrait. The backdrop is chrome, with only a thin blue sub-border framing the image of the Lions signal-caller. The ovular Topps Chrome logo appears in the upper-left corner, just above a “Rookie RC Card” emblem.

The lower nameplate (which looks more fitting for a card manufactured in the 80s or early 90s) takes on the shape of half of a football. A Lions helmet logo completes the design in the bottom-right corner.

The card represents how well a minimalist design and a bit of chrome can work when the player image is solid.

Matthew Stafford has established his place in the National Football League. Despite years of making lemonade out of lemons for a woeful Lions franchise, Stafford has garnered strong name recognition and solid statistics.

Stafford’s cards will never garner the prices of a Patrick Mahomes rookie card or a coveted Tom Brady card—six or seven-figure sales prices are just not in the cards (pun intended) for those who have or acquire a Matthew Stafford rookie card.

Temper your expectations a bit, though; you may be pleasantly surprised by how Stafford’s top-shelf rookie cards perform. A Hall of Fame induction is not out of the question for Stafford. Neither are significant accolades that could significantly boost the value of his rookie cards.

At prevailing price points, there is an argument to be made that Stafford’s rookie cards constitute a strong opportunity for collectors.