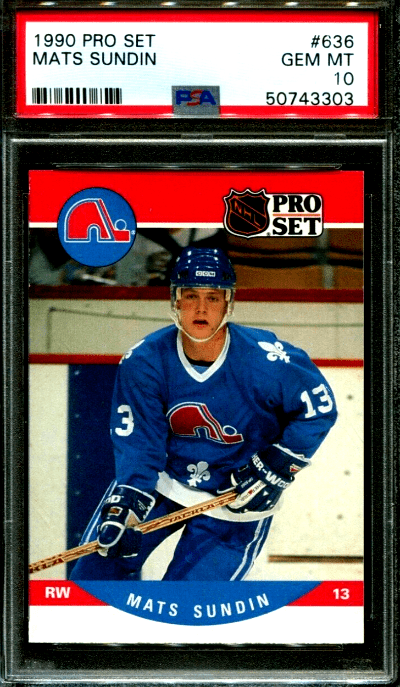 Released at the height of the collectible craze in the 1990s, Sundin’s cards aren’t worth much in the grand scheme of things

For example, a gem mint graded version of the 1990 UD RC can be found for under $100, while the OPC card is only slightly more expensive in comparison.

Here are three of the best Mats Sundin rookie cards, centering on his time with the Nordiques back in 1990.

There were six Sundin RCs released in 1990-91, coming at the height of the ‘junk wax’ era. They were all overproduced, so they’re plentiful in the present day. 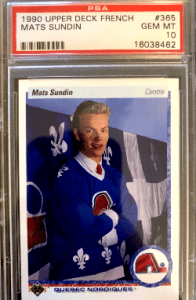 We feel the 1990 Upper Deck French set is one of the most underrated sets in the hobby. Not only are the top rookie cards extremely rare at high grades (a PSA 10 is hard to find and a BGS 10 forget about it!) but they hold up very well to father time. 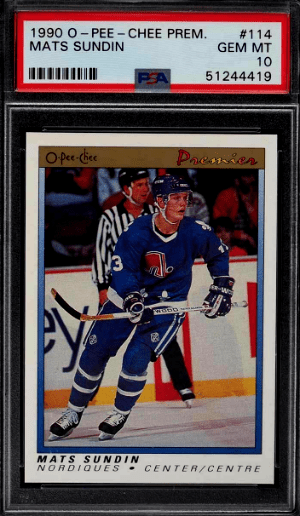 The 1990-91 O-Pee-Chee Premier is undoubtedly the most popular Sundin RC in terms of value and rarity. The card has a great shot of Sundin on the ice, with a referee in the background, while the bilingual text lists his position as “center/center” at the bottom.

There’s a gold tab at the top to denote Premier status, and you’ll also find an OPC logo in the top left corner.

The next card is a Pro Set release that has a larger image and a color scheme that fits in well with the background. Sundin is pictured on the ice in full gear, staring directly at the camera.

It’s arguably the best-looking rookie card from his collection, and you’ll find lots of information about the player on the reverse. 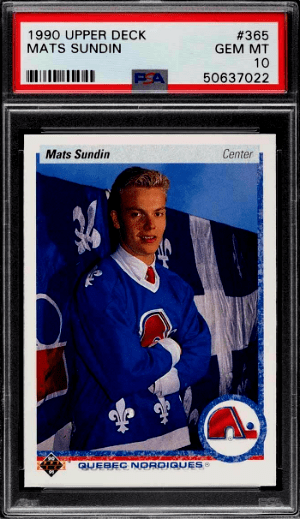 Sundin’s Upper Deck RC was released in their first-ever hockey set and features a posed shot of the player with his arms crossed.

There’s also a version found in the 1990-91 Upper Deck French set, which was originally seen as one of the rarer versions for collectors to chase. Inevitably, it was soon overproduced, as with the others on this list. The only difference on the front of this version is the word “Centre”. 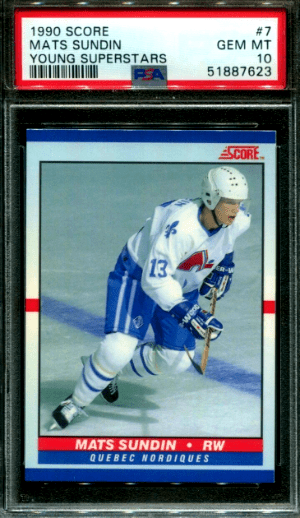 Looking to get an estimated value of your Mats Sundin RC? Post in the comments section below if the card is graded OR if the card is not graded email us at minimum 2 photos to value@goldcardauctions.com. 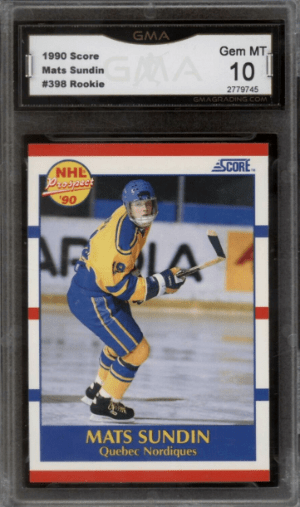 Sundin is the all-time leader in goals and points for the Toronto Maple Leafs, although Auston Matthews’ current pace could see him surpassing the legend in due course. Regardless, his cards will always be collectible, if not the most expensive options overall.

Gem mint copies do stand out, but they’re widely available. Sundin’s first NHL-certified autograph is from 1995-96 Be A Player set, but even that can be found at the sub $50 range.

It’s great news for fans, but there’s not much of note if you’re looking at his cards as a pure investment. Other players are likely to give you a better ROI i.e. Mario Lemieux and Wayne Gretzky rookie cards.