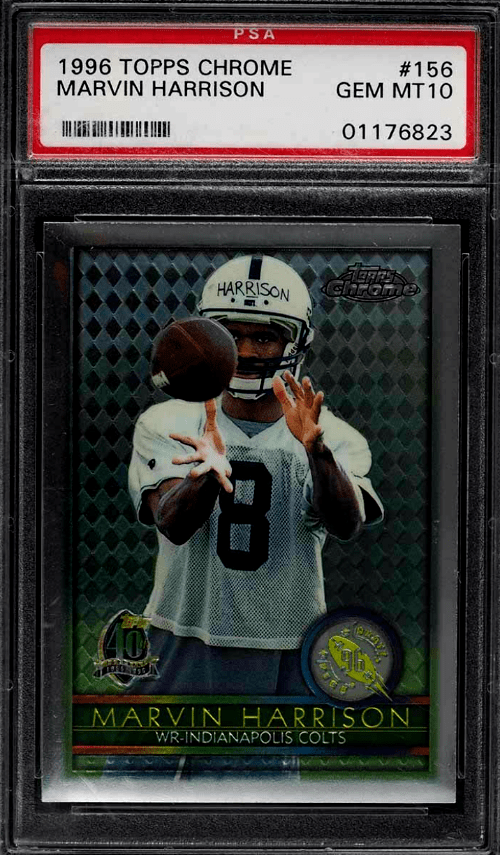 Marvin Harrison was a wide receiver who spent his whole 12-year NFL career with the Indianapolis Colts.

During his career, Harrison helped the Colts to Super Bowl XLI (Colts vs Bears Stats) and led the NFL in reviving yards on two separate occasions.

Marvina was a first-round, 19th overall pick for the Colts in the 1996 NFL draft.

He was selected to play in 8 consecutive Pro-Bowls between 1999 and 2006 and was elected to the Pro Football Hall of Fame in 2016.

Marvin Harrison slotted straight into Colt’s starting line-up in his rookie season, playing in all 16 games, and starting 15 of them.

He completed 64 catches for 836 yards and 8 touchdowns and added another 15 yards on the ground.

Let’s take a look at the top-rated Marvin Harrison RCs from an investment perspective. 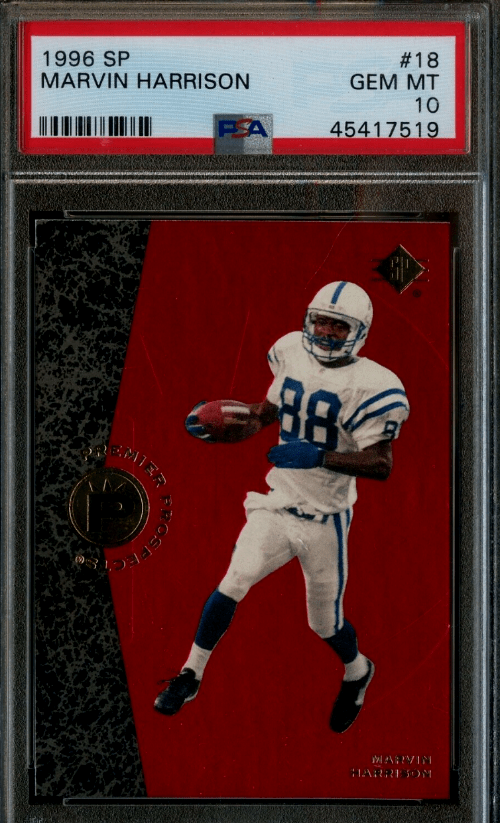 This is one of the better-looking cards you will see. Harrison in full white Colts uniform takes up the majority of the space with the ball in his hands.

The background is a wonderful black and red, with a golden ‘Premier Prospects’ stamp on the left-hand side.

This is the most popular Harrison card on the market, and it has held decent value ever since it was printed.

These days it is becoming increasingly rare and finding it on the open market in top condition is nigh on impossible.

If you are lucky enough to come across it, be prepared to pay top money. 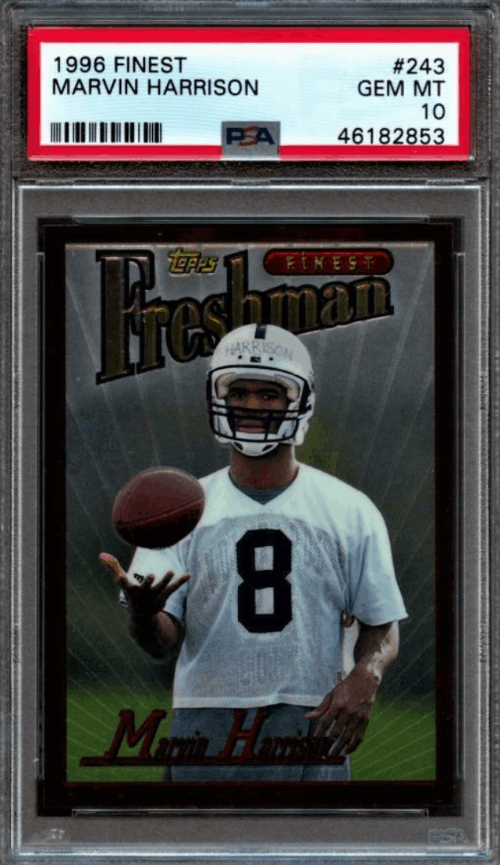 This card does not quite have the same charm as the SP card.

It features Harrison in practice gear with the ball and some slightly dated font graphics that give all the usual information such as team, name, and position.

Despite not looking particularly good, the Finest brand name alone is enough to ensure that it is an exciting card to own.

It does not have quite the same value as the SP card, but it similarly has become rarer over the years, and you will have to have a moderate budget at least to get your hands on it.

No rookie set from the ‘90s is complete without at least one Topps Chrome card.

Harrison’s version features a front-on shot of him in practice gear about to catch the ball on a grey chequered background (base version).

There are a few parallels that mean this is a good card for all collectors, from the slightly less valuable base version to several limited-run refractor parallels which have a higher value, there is something for everyone. 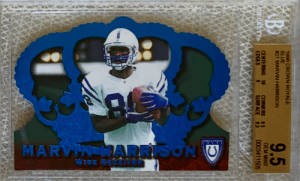 If you would like investment advice in regards to buying a Marvin Harison football card please email us at advice@goldcardauctions.com or hit us up on the GCA FB Page.

Harrison’s induction into the Hall of Fame in 2016 guarantees that his name will not be lost to history.

A Hall of Fame induction always bodes well for rookie card value, and it is no different for Marvin Harrison.

He saw a boost in value with the initial induction and at the very bare minimum, they should retain their value over the coming years.