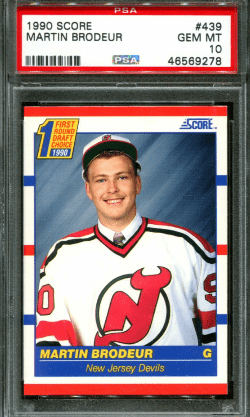 Martin Brodeur (05/06/72) has to be included in any list containing the best goaltenders to feature in the NHL.

21 of his 22 seasons were spent with the New Jersey Devils, where he amassed a collection of three Stanley Cup championships and five Eastern Conference championships, along with winning Olympic gold twice with Canada.

Here’s a rundown with three of the best Martin Brodeur rookie cards to keep an eye out for and investment advice over the next few years.

Only a handful of Brodeur RCs was released during the 1990-91 season. 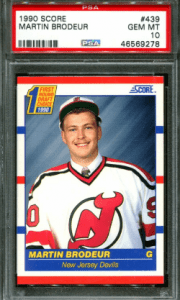 The 1990 Score set contains several exciting cards wrapped in a recognizable border, which is meant to represent an ice rink.

Brodeur’s RC features a profile shot of the player on the day he signed for the Devils as the first-round draft pick. A combination of mediocre card stock and the red line at the top makes it fairly condition-sensitive.

This is also the only 1990 set to include Brodeur, so how have other cards been able to make it onto the list? 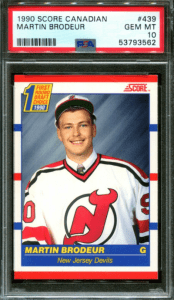 The 1990-91 Score Canadian release also contains the Brodeur RC. This card is similar to the US version seen above in many respects, but there are several notable differences.

It has bilingual text on the back in both English and French to cater to a Canadian audience, while the Score logo on the front is red rather than blue.

If you’re in the mood for something different, the 1990 7th Inning Sketch is another great early Brodeur card.

It’s an XRC, which means it’s a minor league edition that focuses on his time with Saint-Hyacinthe Laser.

The card has a lower print run than the Score versions, featuring a landscape design and a thin blue border.

You’ll also find an image of Brodeur doing the splits on the reverse, with his helmet up so his face is visible.

Are you looking for more advice in regards to sports card investing? Email us at info@goldcardauctions.com, and we will help. 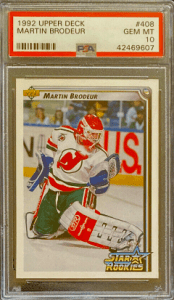 Brodeur is a Hall of Famer, having been selected in 2018 after the obligatory three-year waiting period following retirement.

As a legend, are copies of his rookie cards seen as a no-brainer from an investment perspective?

100% Yes. And we feel his cards are somewhat undervalued based on him being the best goaltender the NHL has ever seen.