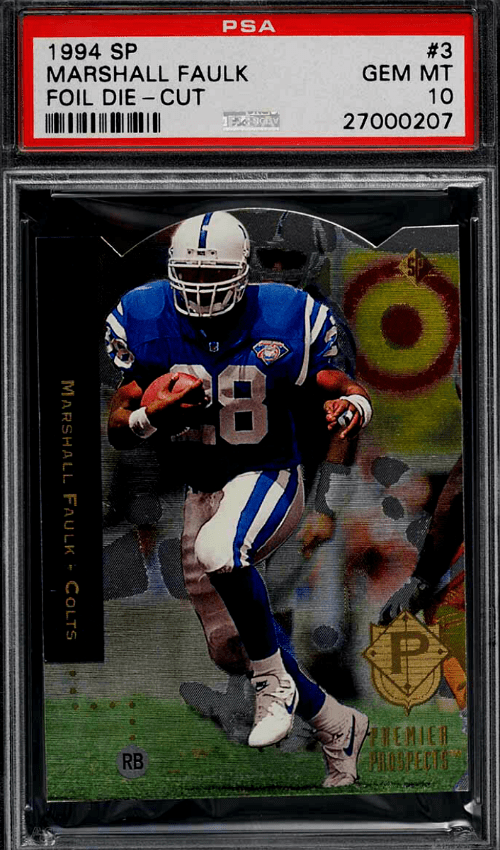 Marshall Faulk (02/26/73) is a retired running back who spent 13 seasons split between the Indianapolis Colts and the St. Louis Rams. A Super Bowl champion in 2000, he’s the only player in NFL history to have reached 12,000 rushing yards along with 6,000 receiving yards.

We’ve come up with a list with three of the top Marshall Faulk rookie cards on the market, as well as an investment outlook for the future.

Faulk has 21 rookie cards in total, so there’s a massive selection to choose from. Unfortunately, they were released during the height of the junk wax era, so the majority aren’t worth much if you’re looking at ungraded copies.

He has no pre-rookie cards, which makes things slightly easier. Here are three of the best Faulk RCs overall, based on reputation, rarity, and value. 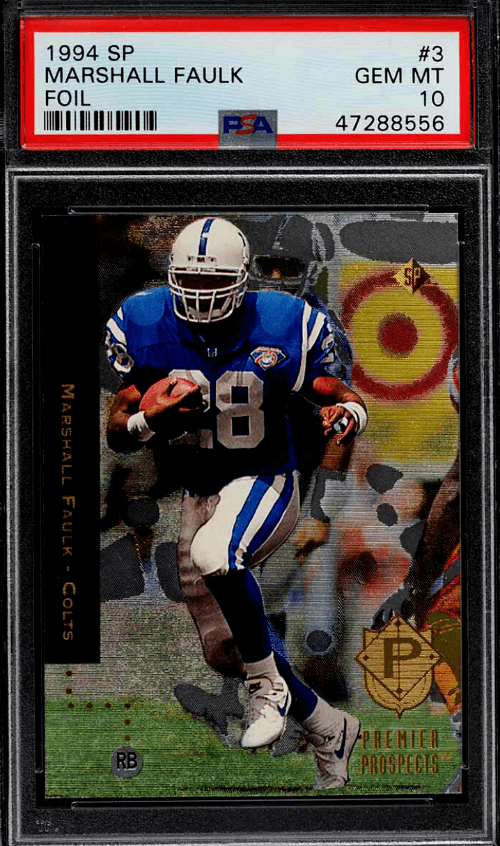 The first card to make the list is his 1994 SP. It features a large image of the RB doing what he does best, with a ball tucked under one arm. It has a simple stadium background, with a black border on the left to fit his name and team in gold lettering. There’s a large Premier Prospects logo at the bottom and a small golden SP logo at the top.

As well as the base version, there’s a further die-cut card, which retails in the low four-figure range if you manage to find a PSA 10 copy on the market. The edges are particularly easy to chip, which explains the price and the rarity. As such, it’s probably his best RC overall from an investment perspective. 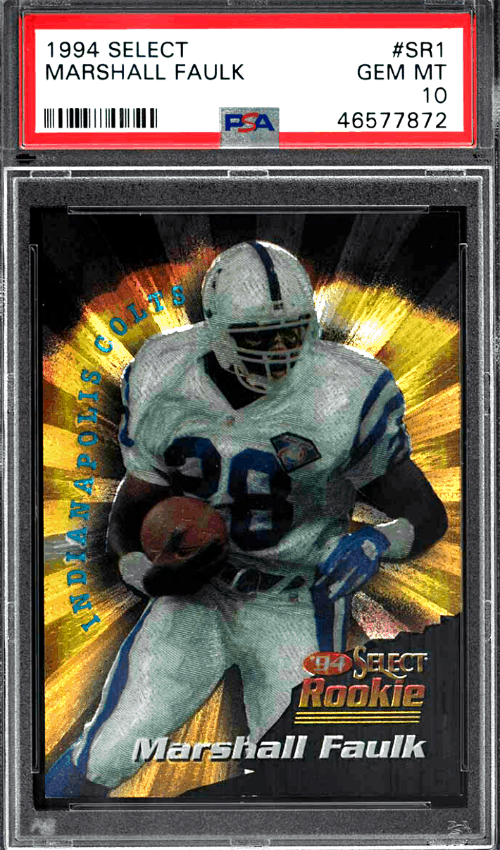 Another rare chrome card, the ‘94 Select features a strong image of Faulk on the front, backed by a gold and orange circle which mimics an explosion around the player. It’s a great looking edition if a little darker than it could be. It has a ‘Select Rookie’ logo at the bottom, and it has a separate image of the player on the reverse. (It also notes his ‘explosive power’, going some way to explain the design.)

Despite a number of potential issues relating to the surface and the edges, it’s reasonably affordable unless you’re looking at gem mint versions, so it’s another decent investment piece. 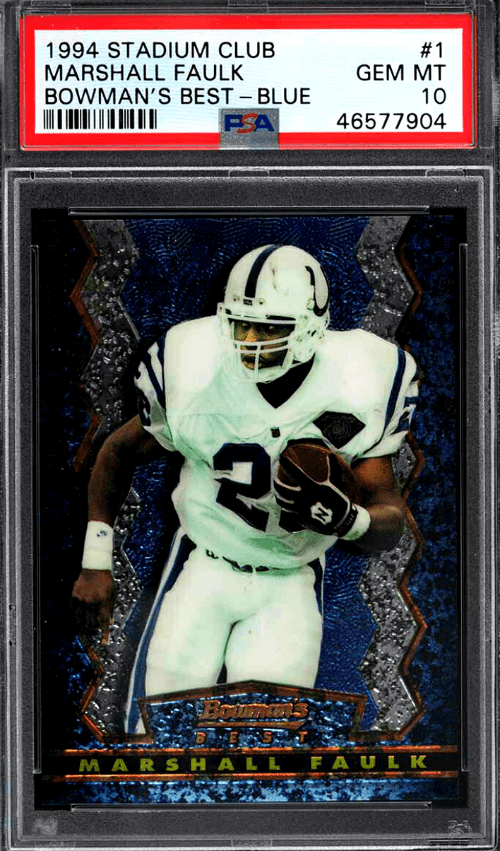 Next up is a card with a vivid 1990’s design. You’ll find an action shot of Faulk laid across a blue and silver background, along with a bronze trim on the Blue version of the 1994 Stadium Club. There’s a ‘Bowman’s Best’ logo at the bottom in bronze, and his name is found at the bottom, in thick yellow text.

It’s another valuable option if you’re looking at gem mint copies. (That is if you ignore the base version.) The Blue card has a chrome finish and no border, but PSA 10 copies do tend to crop up from time to time.

The most valuable Marshall Faulk rookie card is the 1994 SP Foil Die-Cut #3 which will go over $1k at high grades.

If you are looking to buy a Marshall Faulk RC and would like some advice please email us at advice@goldcardauctions.com or visit Gold Card Auctions on Facebook. 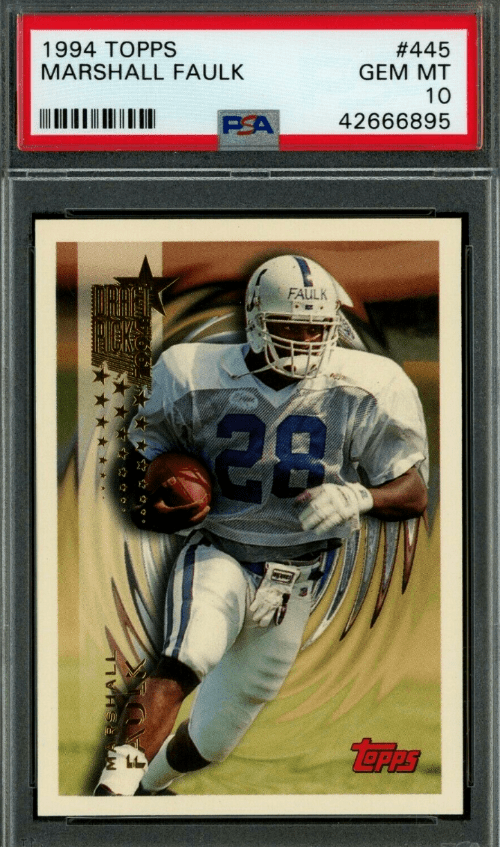 Faulk has a list of NFL records that is longer than my arm, while he was the league MVP in 2000. He was a three-time NFL Offensive Player of the Year, and he was also a great college player.

The retired RB is known for his work off the field, having set up the Marshall Faulk Foundation to help underprivileged children achieve their dreams back in his rookie year.

Faulk entered the Hall of Fame in 2011, four years after his retirement. He has a strong legacy, so it’s no surprise to see that his rarest cards can do well if you’re looking at gem mint versions.

His RCs are all products of their era, and they’re probably a bit too busy for modern tastes.

However, mint copies are still worth a fair amount, despite being released during the height of the junk wax era, when print runs could sometimes be in the millions.

If you’re looking at his cards from an investment perspective, it’s probably best to stick to graded cards, to be held as a long-term investment. After all, Faulk retired 15 years ago, so there’s still time to see prices rise as nostalgia helps to solidify his status as one of the greats from the era.

For pieces released further down the line, his ‘96 Upper Deck Game Jerseys (#GJ6) is one of the first-ever player patches, while there are a number of signed options from recent years if you would prefer an autographed card. Either way, there’s a potential for profit to be had with all, as long as you’re willing to hold onto them for a while.