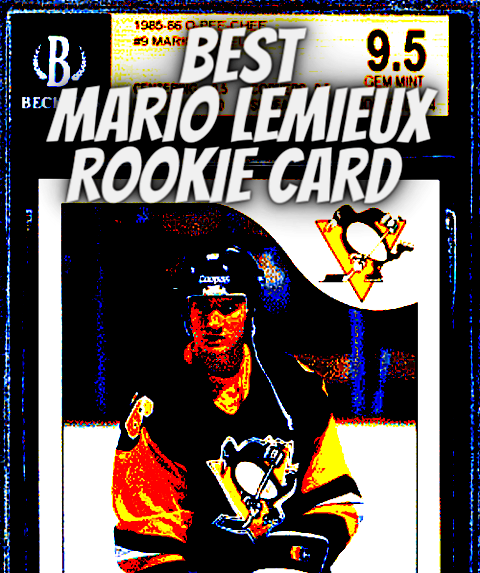 Mario Lemieux (10/05/65) is a legendary center who spent 17 seasons with the Pittsburgh Penguins from 1984 to 2006. He is regarded as one of the greatest hockey players of all time.

Le Magnifique purchased the Penguins in 1999 and brought the franchise out of bankruptcy, while he still holds or shares numerous NHL records.

Here’s a list containing three of the best Mario Lemieux rookie cards, as well as investment advice if you’re tempted to add a copy to your personal portfolio (undervalued? Nathan Mackinnon Rookie Cards).

O-Pee-Chee is Topps’ Canadian counterpart and is often preferred when looking at older hockey cards. Many OPC cards (including this one) are bilingual, sharing both French and English text.

As there are no manufacturer logos on the front of the card, you’ll have to check out the back to be sure of which version you’re really looking at.

OPC copies tend to be more expensive due to lower print runs, which leads to fewer gem mint copies in the present.

For example, there are 47 PSA 10 copies of the OPC card according to their registry, which rises to 75 when looking at the Topps version.

The 1985 Topps RC is a simple card, with an action shot of the player enclosed upon a white border.

There’s a Penguins logo in the top left corner, while Lemieux’s name and position are found on a yellow tab at the bottom. As his only US rookie card, you’d expect it to be expensive when looking at mint copies.

However, it’s outshone by the card listed below, for reasons that become apparent almost instantly. 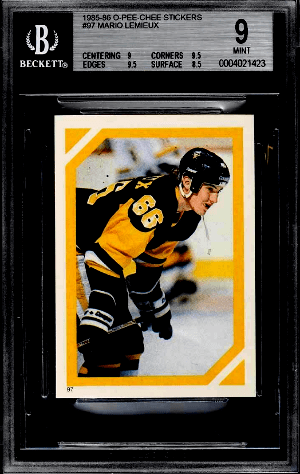 Continuing with the OPC theme, there was a sticker set released in 1985, containing a Lemieux collectible wrapped in a gold border.

The player is featured in his black and yellow Penguins jersey, with a number visible on his shoulder.

It doesn’t match up to the others in terms of pure value, but it’s the most affordable option when looking at higher PSA grades.

Mario Lemieux featured a rare dual-auto with Wayne Gretzky in 2010/11. The card had both players signed on-card featuring a patch jersey as well.

This is a very difficult card to find but a must-have for any Mario Lemieux collector. This card is most likely one of the few dual-signed autographs featuring both Lemieux and Gretzky on the same card.

This card is another rare dual-patch auto featuring Lemieux and Jagr. In fact, this card is so tough to find that none have been listed for sale within the last couple of months.

Jagr was teammates with Lemieux for a number of years so this is another must-have for any Penguins fan.

Will one of these cards pop up for sale within the near future?

Mario Lemieux was featured in the 1988 Topps set as card number one. This card is an early example in his career.

This is a great alternative card to invest in if you cannot afford his rookie. Investing in a high-grade example even PSA 8 or higher is still very obtainable for most buyers or collectors.

This card is very underrated in a high-grade example especially PSA 9’s or higher because not many of these received a high grade. Only 235 PSA 9’s and 68 PSA 10’s.

This card is easily obtainable in a high-grade PSA 8 example. Investing even in a PSA 9 could pay off in both the short term and long term.

This is a great addition for anyone collecting Lemieux, PSA 9’s may become more difficult to find especially with there only being a limited amount of them available.

Mario Lemieux was retired for four seasons and then came out of retirement during the 2000-01 season.

This card is a rare on-card autograph of Lemieux and serial numbered out of 66. There are only very few of these available for purchase because this card is so limited.

Lemieux did not have too many on-card autographs after he came out of retirement so investing in this card could pay off in the long term.

A rare 1990’s insert, featuring a low serial numbered print run is what makes this card Lemieux card valuable. 1990’s inserts are continually becoming tougher to find and this one is a nice gold version.

This set was way ahead of its time when it was released. Serial numbered inserts cards featuring gold are still considered some of the most sought-after today.

This will be a tough card to find especially since there are only 30 that exist.

This card is considered Lemieux’s XRC, which means it was the first card he ever produced.

A card like this is a great investment because many collectors or buyers are still unaware of this card.

Investing in a PSA 8 or higher could pay off in both the short-term or long-term. This is a card that has a lot of room for growth because it’s considered his first card ever produced.

The most expensive Mario Lemeiux rookie card is the 1985 Mario Lemieux O-Pee-Chee Rookie Card as it will beat out the Topps version by 20 to 30% on average.

Please email us at value@goldcardauctions.com if you would like buyers’ advice in regards to picking up Mario cards.

If you would like an estimated value of your Mario Lemieux hockey cards please visit the Gold Card Auctions Discord Channel.

Most Expensive Hockey Cards From the 1990s

Lemieux is a true GOAT, and it’s clearly shown by the value of his rarest rookie cards.

More than a typical Penguins legend, he battled back from Hodgkin’s disease and a variety of different injuries and ailments over the years, which held him back from achieving even greater numbers in the long run. 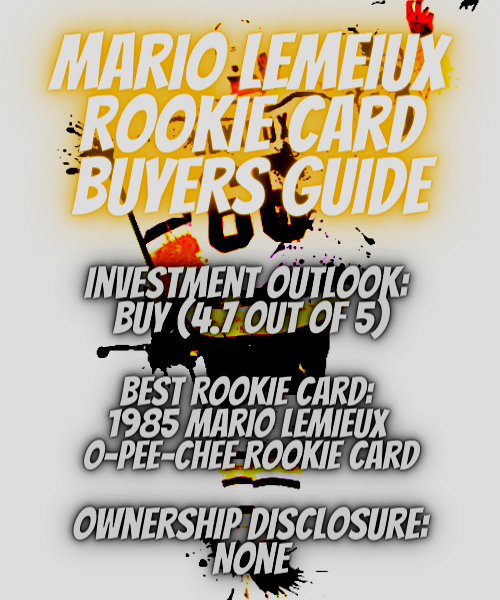 Rating 5/5 – Mario Lemieux is arguably regarded as a top 10 hockey player of all-time. Lemieux is a player who had an iconic career and a very popular player. His cards should continue to climb in value each year. You can’t go wrong with investing in any Lemieux cards listed above.

My personal favorite Lemieux card on the list is his O-Pee-Chee rookie card. Vintage rookie cards are becoming more difficult to find especially PSA-graded examples. My advice would be to invest in the highest grade rookie of Lemieux that you can afford. His rookie card is still relatively cheap compared to Gretzky’s in a similar card.

One thing to keep an eye on when investing in vintage rookies like Lemieux’s is to “buy the card” and not the grade. You could find a well-centered PSA 5 or 6 example instead of buying an off-centered PSA 7. The card with the better centering and eye appeal is a much better investment.

What is the rarest hockey card?

The rarest hockey card is a PSA 10 graded 1979 Wayne Gretzky O-Pee-Chee rookie card. Good luck getting your hand on one of those.

Are any hockey cards from the 90s worth anything?

Hockey cards from the 90s can be worth tens of thousands of dollars as 1990s cards are making a huge comeback.

Are O-Pee-Chee hockey cards worth anything?

Yes, O-Pee-Chee hockey cards are worth thousands if not millions of dollars in the case of the 1979 Gretzky OPC RC.