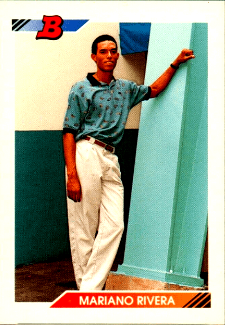 Mariano Rivera (11/29/1969) was signed for $2,000 on Feb. 17, 1990, by the Yankees after their Director of Latin American Operations Herb Raybourn saw him toss just nine pitches. The above Mariano Rivera rookie card picture was taken shortly after the signing.

However, it was not smooth sailing, as Mariano posted a pathetic 5.51 ERA as a rookie in 1995. But Mariano found his home in the fall of 2005 when he started pitching relief for the Yankees in the playoffs. That’s where he stayed for the next 18 years.

The following season (1996), he posted a jaw-dropping 2.09 ERA, with five saves and 130 strikeouts, finishing 3rd in American League rookie of the year voting. He ended up saving a total of 652 games, with 1173 strikeouts and a filthy career ERA of 2.21.

After seeing those stats, it is no wonder he was the first MLB player to be elected by a unanimous vote (not even the legendary Derek Jeter could accomplish this feat). After making the Baseball HoF, his rookie cards’ value exploded and is still rising today.

Here are the top-rated Mariano Rivera baseball cards we would purchase from an ROI perspective. 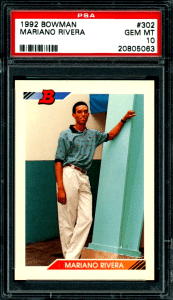 Here is the cream of the crop regarding Mariano Rivera baseball cards. Numbered #302, the card shows babyface Mariano in street clothes after inking a $2,000 contract with the New York Yankees.

“In our opinion, the 1992 Bowman Mariano Rivera RC is by FAR the top Rivera baseball card and is the only one worth owning.”

His name is in the bottom right corner, while the Bowman B Logo sits in the upper left. The card graphics are not the best, but the photo of Mariano itself is epic… one could easily mistake Rivera for an accountant, banker, or maybe even a weekend tennis player. Still, by no means a future HoF baseball player… we love, LOVE this card for long-term investors. 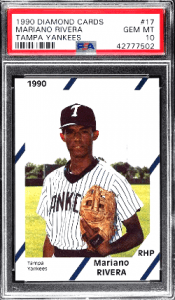 If you are determined to own more than one Mariano Rivera baseball card, the 1990 Diamond Cuts card is a good option. Numbered #17, the card shows Mariano with the Tampa Yankees looking somewhat dazed and confused.

His name and position are squished together in the bottom right corner, while the year is printed in the top left corner (border in a zebra stripe graphic). 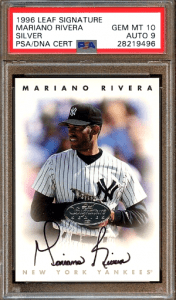 Here is a Mariano Rivera Autograph card for all your auto hounds. The card is a no-number and pictures Mariano on the mound looking for the correct sign.

His printed name is centered along the top while the auto sits at the bottom. The words “New York Yankees” in all caps are centered at the bottom… a pretty nice-looking card and a must for Rivera autograph seekers. 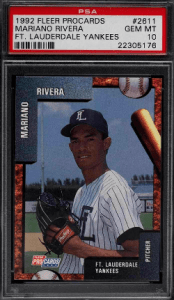 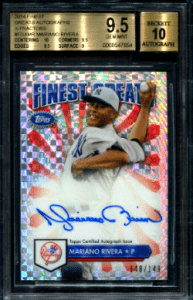 GET AT US US ON SOCIAL

Looking to purchase a Mariano Rivera card and want advice? Comment below or email us at advice@goldcardauctions.com.

Need an estimated value on your baseball card? Comment below (include the card’s year, player, and brand name) or email us a photo of the card to value@goldcardauctions.com.

Mariano Rivera was not only the best relief pitcher in the game by miles, but he was also the first player unanimously elected into the Hall of Fame… yea, this guy had a hell of a career.

For a while, his rookie card’s value was a complete joke (in terms of being undervalued by so much). The market has made a much-needed correction, but the 1992 Bowman Mariano Rovdera RC should be much higher based on his dominance.

We have no problem loading up on this guy even if you don’t buy his best card in the 1992 Bowman RC.