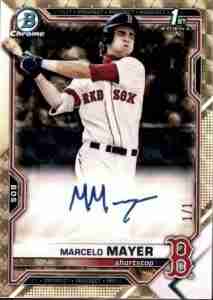 The Boston Red Sox drafted Marcelo Mayer with the 4th overall pick in the 2021 MLB Draft, and he is currently destroying minor league pitching.

He is known for being not only a beast at the plate but also a hell of a defender. You get the best of both worlds with Mayer. Marcelo Mayer baseball cards are gaining popularity, and the man can be found on Twitter at @Marcelo_Mayer10.

We are slowly adding a few Mayer rookie cards to our collection. Although we don’t like Mr. Mayer as much as we love Jasson Dominguez, we do feel he has a decent shot at being a star in the league at some point. 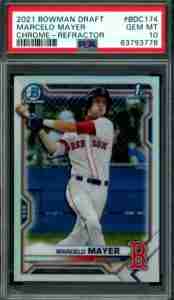 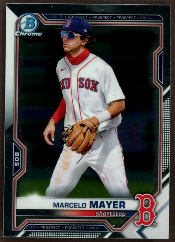 Much like the card above as it’s from the same set, but this one is much rarer and is known as SP (photo variation). We love photo variation cards and are looking to purchase this card at a PSA 10 or SGC 10 grade. Please email us at info@goldcardauctions.com if you have this card and are willing to part ways with it. 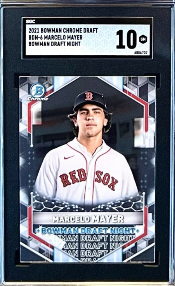 Here is the only other Mayer rookie card we would consider purchasing for our collection. All-Time Great and Must Have: Mike Trout Rookie Cards 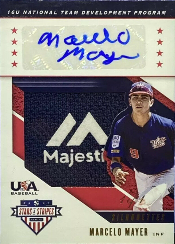 As we mentioned, we feel Marcelo Mayer rookie cards should be a good investment over the next 12 to 24 months but are not sure how much further we would go than that.

In other words, buy his rise to the MLB but sell before his first plate appearance (unless you feel he is a shoo-in to be an All-Star like we did and predicted with Vlad Jr. rookie cards… but we do not feel that way about Mr. Mayer but could be wrong).