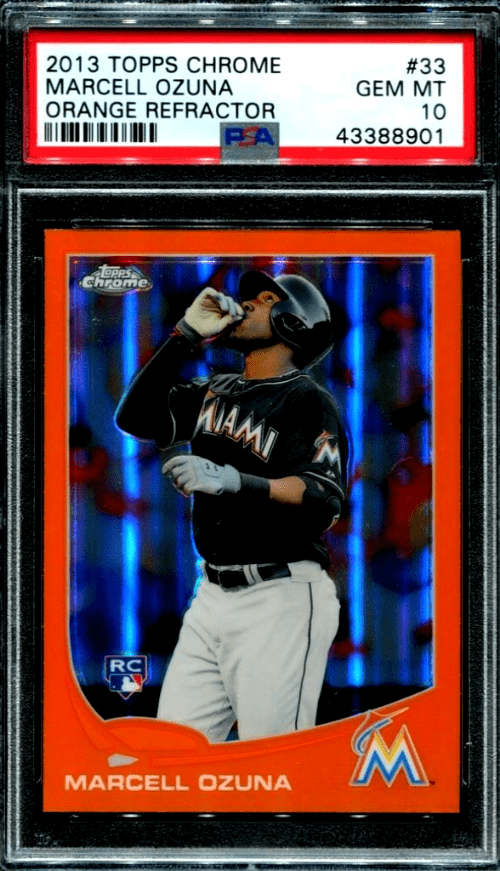 Marcell Ozuna (11/12/90) is a left fielder who currently plays for the Atlanta Braves. He first turned out for the Miami Marlins in 2013 and spent a season with the St. Louis Cardinals before signing a one-year contract with the Braves in 2020.

Despite being a two-time All-Star, he was a late bloomer, with his breakout season coming in 2017. He won his first Gold Glove and Silver Slugger Award while playing for the Marlins, and he was later traded to the Cardinals and signed with the Braves this year. Ozuna also doubled his contract as of 2020, giving some indication of his newly found importance to the team.

Here’s the lowdown on the best Ozuna rookie cards, with three great options and investment advice as he heads into a key stage of his career.

We’ve looked through recent auction data to bring you a list with three of the best Marcell Ozuna cards that are available right now. 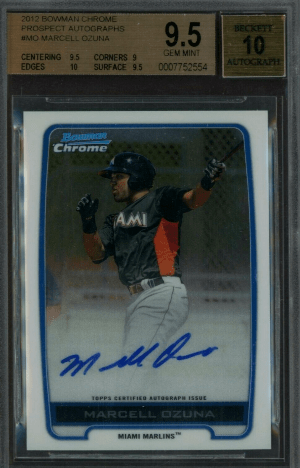 The first card on our list is from the 2012 Bowman Chrome Prospect Autographs set. It might not have the most exciting action shot, but it’s still a signed edition with a strong emphasis on the range of Refractor parallels that come in various colors.

The on-card auto is filled in blue ink, while it has brand recognition thanks to the Bowman Chrome logo found at the top. If you don’t mind a prospect card, it’s hard to do better than this early option. 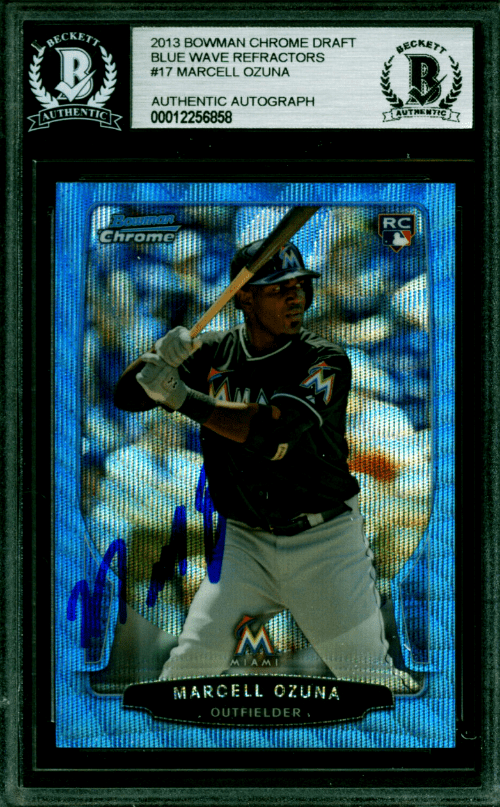 It may lack the signature found above, but the 2013 Bowman Chrome Draft Picks is another great pick if you’re interested in grabbing one of the more expensive Ozuna rookie cards. It features an image of the player, primed with a bat in both hands, while there’s also an RC logo found on the top left corner.

As with modern Bowman Chrome cards, there’s a range of parallels, including Refractors, Silver Ice parallels, and Wave parallels to keep an eye out for. They’re all fairly rare, and they’re some of the more interesting Ozuna RC options on the market.

Ozuna’s 2013 Topps Chrome is the final card on the list, with a perfect blend of looks and affordability. The base card is cheap and plentiful, so we’d recommend looking at any of the Refractors, as they tend to be slightly more valuable in comparison.

The player is pictured mid-prayer, with a slick border design and an RC logo located in the bottom left corner. Ozuna is also outlined, causing him to stand out from the background when the card is viewed head-on. Due to the chromium finish, the card is extremely condition-sensitive, but it’s still the most inexpensive option to make the list. 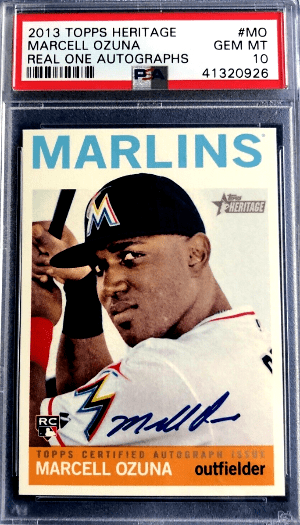 Ozuna RCs are priced about right based upon his career numbers to date. Unless he can continue racking like he has to start the 2020 season we don’t see any major increases in the worth of Marcell Ozuna rookie cards.

DM us on the Gold Card Auctions Facebook Page and we will get back to you ASAP! 🙂

Ozuna had a slow start to life in the big leagues, but he recently hit .367 with a 1.253 OPS and six runs batted in for the first nine games of the season, which was enough to make a real difference so far. He could yet earn an extension to his contract with the Braves, and he’s a likely candidate to drive the most runs for the team considering his current form.

It’s fair to say that Ozuna’s cards have struggled to hit the big time over the past few years, and even PSA/BGS 10 versions of the rarest parallels have failed to reach new heights. As a two-time All-Star at the age of 28, he still has time if he wants to make space for himself in the history books, and he’s going about it the right way so far in 2020.

The reduced prices do mean that his RCs are generally a risk-free investment, while there’s a chance that they could creep up in value as collectors begin to take note of his strong numbers. Whether you’re planning to flip or hold, you could do far worse than Ozuna’s range of rookie options if you’re working within a tight budget.

Having said that we don’t see any reason to add Ozuna rookie cards to your collection at this time as there are better investment options elsewhere.