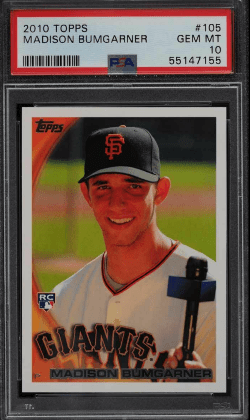 Madison Bumgarner was born on 8/1/1989 and was drafted by the San Fransico Giants with the 10th pick in the First Rd of the 2007 MLB June Amateur Draft… Mad Bum rookie cards were already somewhat costly being a highly-touted prospect.

Bumgarner stands a hulking 6 foot 4 inches and uses his height to create excellent movement on his fastball.

The following year (2011) he truly “broke out” posting 191 strikeouts and finishing 11th in the CY Young award voting.

Bumgarner has a reputation for playing by his own rules and is truly one of the best big-game pitchers of all time. 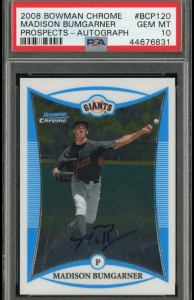 This is the Madison Bumgarner rookie card for sports card investors who have a bigger bankroll.

We have bought a few of these (auto versions) over the last year and will buy more over the twilight of his career.

Numbered #BCP120 and the back reads “Skils: Left-hander with an impressive fastball that shows late movement… Has pushed his velocity pass 95 on occasion… Developing his breaking ball and change-up” 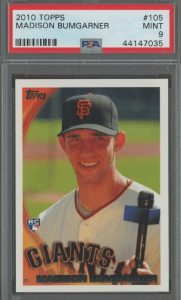 The Madison Bumgarner Topps Rookie Card is a great buy for investors looking to spend a little less cash but still have a good investment in Bumgarner.

Numbered #105 the card shows a goofy, big ear Mad Bum with a microphone in his grill?… guess he is about to be interviewed after a big outing… not the best-looking baseball card but not the worse either.

The back reads “Madison is the latest cog in the young pitching juggernaut being assembled by the San Fransico Giants. He toted his career 27-5 record and 1.65 ERA in the Minors to San Fransico last September as the only major league pitcher born in 1989 to appear in a 2009 Major League Baseball Game.” 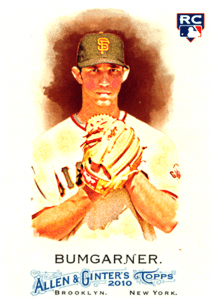 The Allen & Ginter Madison Bumgarner RC is a nice addition to a Madison fanboy collection and is our third pick due to the card being a very reasonable price and we like the looks of the card A LOT.

The card is numbered #6 and shows Madison staring down the pipe looking for the right sign.

The price of Madison rookie cards is fairly cheap right now due to a variety of reasons (i.e. end of his career and not on his A-game anymore).

Please email us pictures of your Bumgarner rookie card to value@goldcardauctions.com for a price estimate.

If you’re on the brink of buying a Mad Bum rookie card and are having second thoughts please email us at advice@goldcardauctions.com to get a second opinion… good luck!

As we mentioned we feel Madison Bumgarner rookie cards are pretty cheap right now in our opinion and will be for a few years while in the twilight of his career.

Buying a few (now) would be a good investment move as we feel his rookie cards will go higher much quicker once his HOF nomination/selection approaches.

We would stick with the Bowman Chrome (particularly an auto if you have the bankroll) and the Topps rookie card.