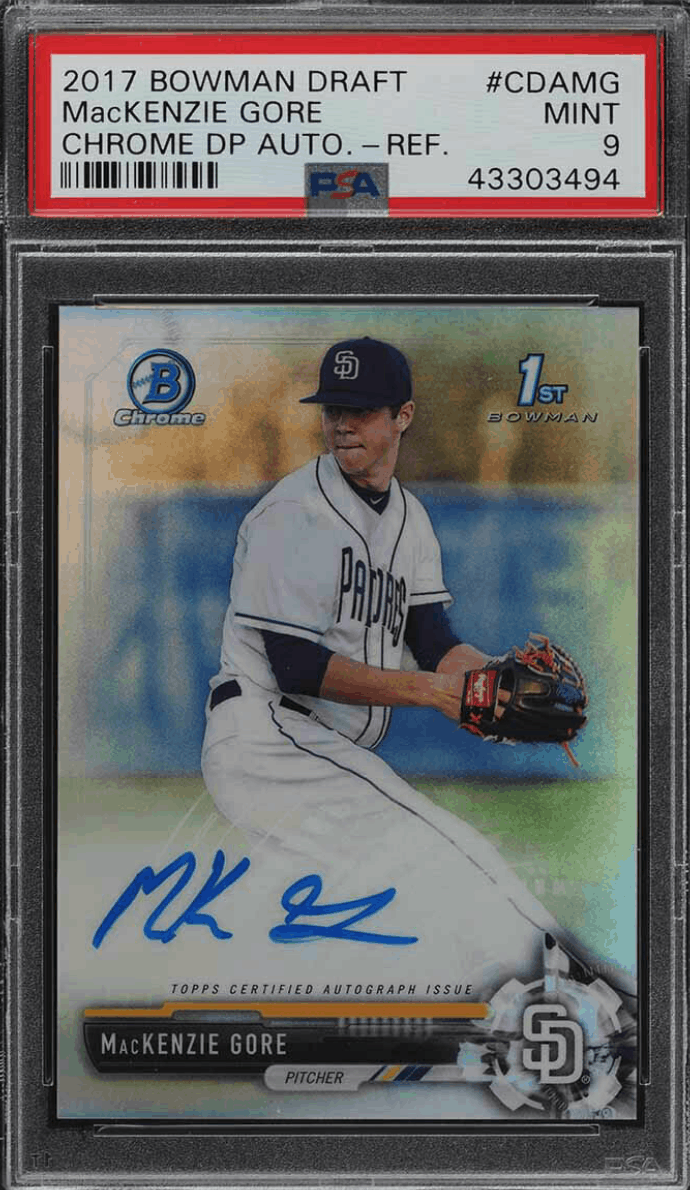 Mackenzie Gore has as an arm that’s blowing away the minors and shooting up the MLB prospect charts. His talent was on full display at the 2019 Futures game.

Though he walked the first batter, he demonstrated veteran craftiness by picking him off at first. He then sat the next two batters down, in turn, to finish the inning with just 11 pitches in total.

A performance like that on a major stage bodes well for his mental toughness as he looks to get a shot in the big leagues next year.

This wasn’t just a flash in the pan. In his first 79 innings this year, Gore has a sharp 1.02 ERA with 20 walks and an unbelievable 110 strikeouts.

This consistent domination has propelled him from number 15 on the MLB top prospect list in April to number 3 overall by the end of July.

With an uninterrupted trajectory that shows no signs of slowing down and a recent promotion to double-A, Gore looks like a lock for the MLB in 2020.

From an investment perspective, pitchers can be tricky. They’re high-risk, high reward investments that can pay off huge.

On the flip side, they’re more prone to injuries, so promising careers can get derailed. If they stay healthy, the extra attention afforded to the position can boost the value of their cards immensely.

But, without a history of major injuries and a world-class arm, Mackenzie Gore looks like a high-value investment while he continues to prepare for entry into the big show. 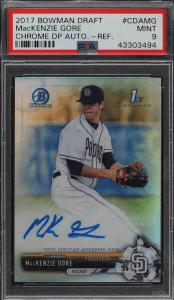 This 2017 Bowman Draft Mackenzie Gore rookie card only gets better from there. With a great signature and gorgeous foil background, this card has a lot of potential for growth.

The serious look on Gore’s face and his classic pose top off what makes this a fun display piece as well as a long-term investment.

Another solid Gore rookie card that will receive double-digit bids when listed in eBay auctions.

A nice card with the image of Gore tossing a fireball down the pipe.

A solid buy when up on auction at the right price. 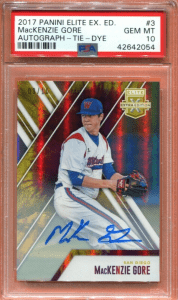 This Mackenzie Gore rookie card it the best investment available in Gore’s bright future. It has every feature a serious investor could possibly want. It’s rated a perfect 10 from PSA.

It’s part of a very limited set. It’s got amazing art with Gore looking menacing and ready to deal. It’s got a large, clear signature.

And, most importantly for its utility as a display piece, it’s got stunning and unique tie-dye foil that just screams for attention.

If you’re looking for an investment into Mackenzie Gore that doesn’t break the bank, this is the card for you. 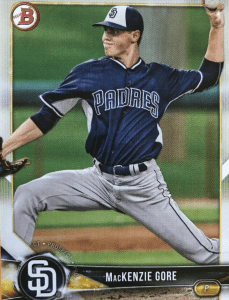 With awesome art featuring a Gore whose talent can’t be contained by the card’s border, this offering is the perfect way to invest in Gore’s future without going all in.

We love Mackenzie Gore Rookie Cards as a long-term investment (maybe more than Jesus Luzardo rookie cards) and are buying the Bowman Chrome cards when up on auctions (particularly the autos).