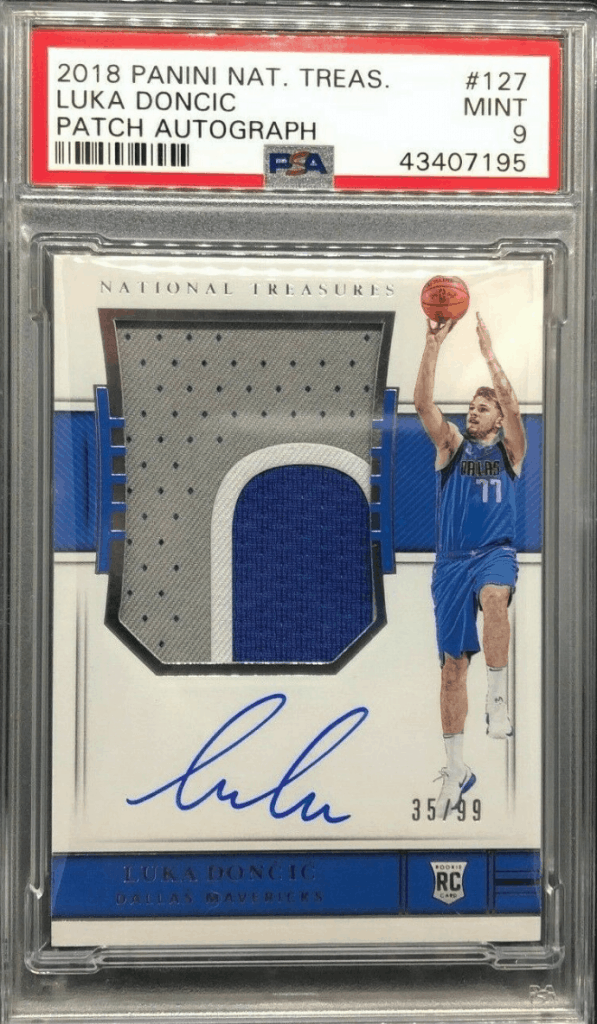 Luka Doncic aka Matador aka Cool Hand aka The Don aka Wonder Boy aka Swaggy L is by far the hottest young player in the NBA and could contend the Trout, and maybe Jordan in the card collecting world.

Luka was drafted by the Dallas Mavericks in the 1st round (3rd overall) in the 2018 NBA draft.

Not only did he win the 2018 NBA rookie of the year but he averaged slightly more than 21 points per game! (insert mic drop).

All this being said you will want to add some Luka Doncic Rookie Cards to your collection starting today!

Here are his best bets from an investment viewpoint…

This Luka card is the definition of sports card investing.

The only other card on earth we would rather have is the 2000 Playoff Contenders Tom Brady Rookie Card #144 Autograph. 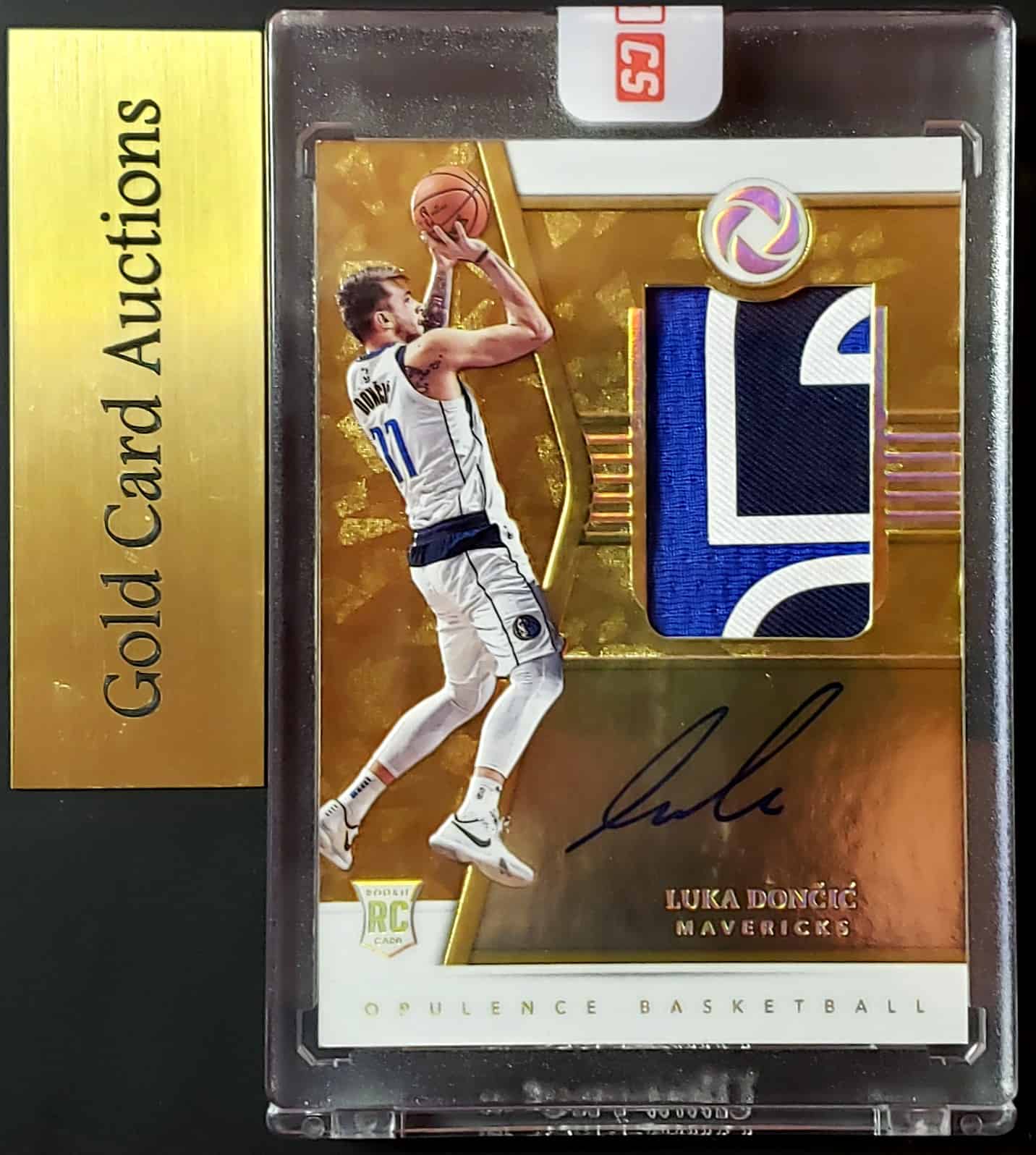 Only ten of these are in existence.

The card is numbered 145 and the back of the card reads “Being down by 3 with 0.6 seconds left on the clock was no problem for Doncic. Facing the Trail Blazers on Dec. 23, 2019, the rookie caught the inbound pass and nailed the fadeaway, game-tying 3 pointer in the corner. His 23 points and big shots further established himself as a player who is never intimidated.”

This card has a huge upside. 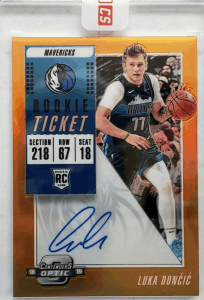 We are in love with this card.

Back in July of 2019 we bought two of these redemptions and received them both back earlier this month and all we can say is WOW.

The Luka Doncic Contenders Optic Orange Variation Rookie Ticket Autograph has a certain mystic surrounding the card we can’t describe and only reveals itself when you’re holding the card… maybe its the orange color we like so much.

Whatever the reason we strongly recommend you add this to your Luka collection if given the opportunity.

The card is numbered 128 and reads “Doncic’s nationwide tour made its first stop at Madison Square Garden on Jan. 30 2019. With fans crammed into the arena expecting a show, the rookie made it his mission to deliver. While hitting a host of miracles buckets, including a one-handed 3-pointer as the shot clock expired, the guard tailed 16 points.”

Most of the Prizm Luka cards are great for the beginner collector as they come at a low-cost point.

The card features Luka Doncic shooting the ball which resulted in most likely a swoosh two. 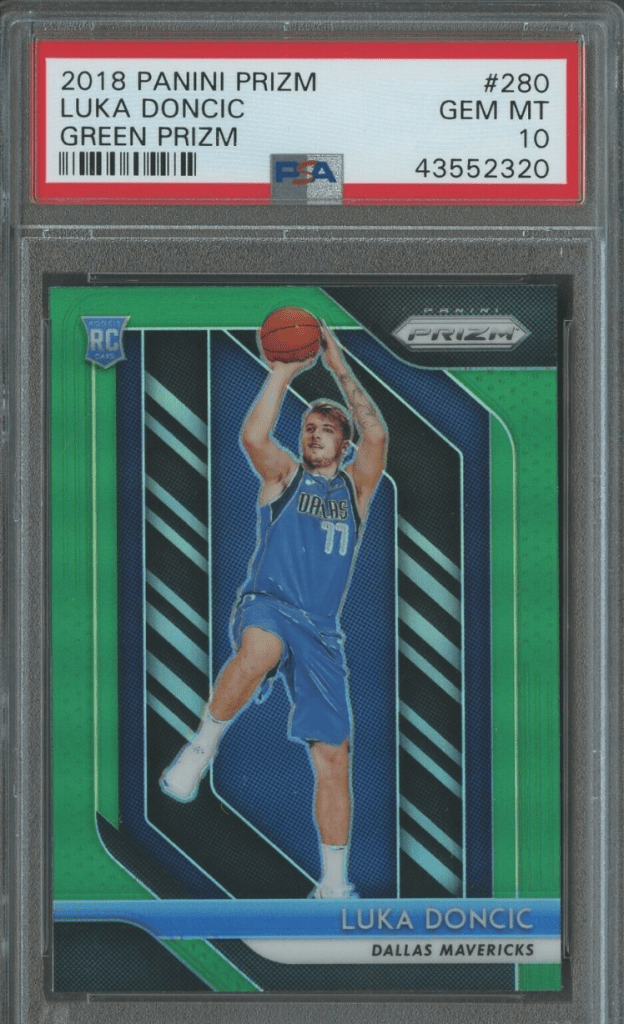 Prizm Update: We came across the Luka Doncic White Sparkle Panini Prizm card (pictured below) the other day and rate it as the highest among all the prizm in terms of looks… “its a beauty Clark” and is a must-have for a Luka collection. 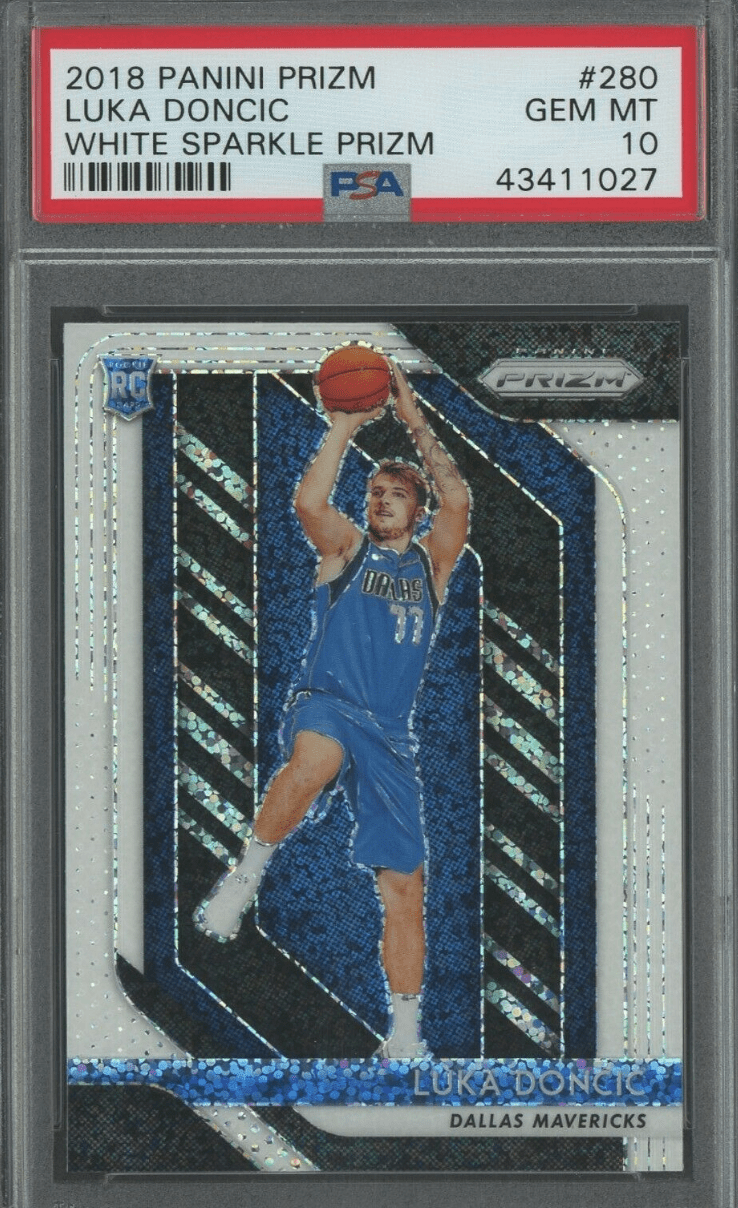 The 2019 Panini Impeccable Doncic rookie card is a must for the high-end collector.

This card will go into the 4 digits but should be worth the investment a few years from now when Luka is lifting up MULTIPLE MVP Awards. 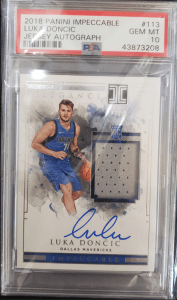 The card features Doncic with the ball looking for someone to pass it to or possibly go to the hoop for a layup… either way this card is eye candy.

The card comes with his autograph and a game-used patch.

The back of the card reads “Tigers are known to be mighty, powerful, and dynamic, a dominant presence in the jungle. Doncic has the same reputation on the hardwood, which could explain his Bengal tatoo on the rookie’s left forearm. The guard will spend the 2018-19 season extending his territory and making his mark all over the country”

This card is a true must-own for high-end collectors.

This is most likely our favorite Luka rookie card.

Despite the lack of a patch we just love the artwork of this card (plus the autograph). 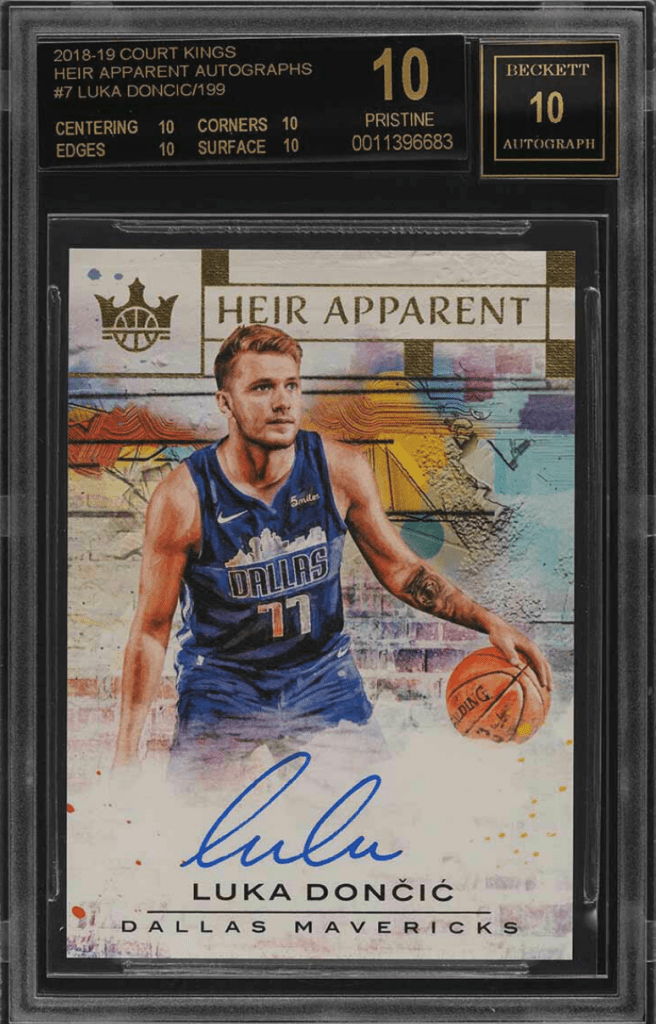 The Luka Doncic 2018 Court Kings Heir Apparent is numbered No. HA-LDC and simply reads the autograph is guaranteed by Panini American Inc.

Again this card will come with a hefty price tag.  Good luck with adding this bad boy to your collection.

Another card that will set ya back more than you would like but again well worth it.

The card features Luka taking a one-handed shoot and is /99.

The 2018-19 Luka Doncic Panini National Treasure card is numbered 127 and reads “Became the second teenager to start a season opener with the Mavericks (Dennis Smith Jr.)… tallied 10 points, eight rebounds, and four assists in his NBA debut vs Phoneix on Oct. 17 2018… First player from Slovenia to be drafted in the first round since Beno Udrih and Sasha Vujacic in 2004.”

The Luka Doncic Noir card is numbered 303 and features Donici in black and white.

Luka is scanning the court looking for a player to pass the ball to (Luka consistently has his head up… the true sign of a great player). 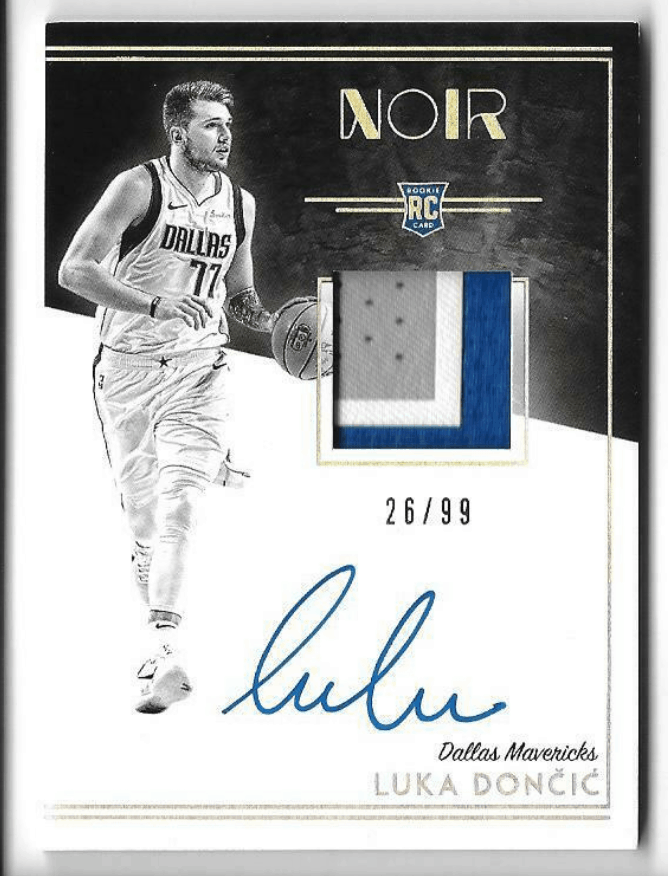 The back of the 2018-19 Panini Noir Luka Doncic RPA RC Rookie Patch card only shows the Dallas Mavericks logo and reads “THE ENCLOSED PLAYER-WORN MATERIAL AND AUTOGRAPH ARE GUARANTEED BY PANINI AMERICA INC.”

Tired of all of these Luka cards that cost as much as your monthly house mortgage?

Well here is a Luka Doncic rookie card that can be had for under $100 (for now).

The 2018 Luka Doncic Panini Donruss rookie card is numbered 177 and is a solid investment for the budget-conscious collector. 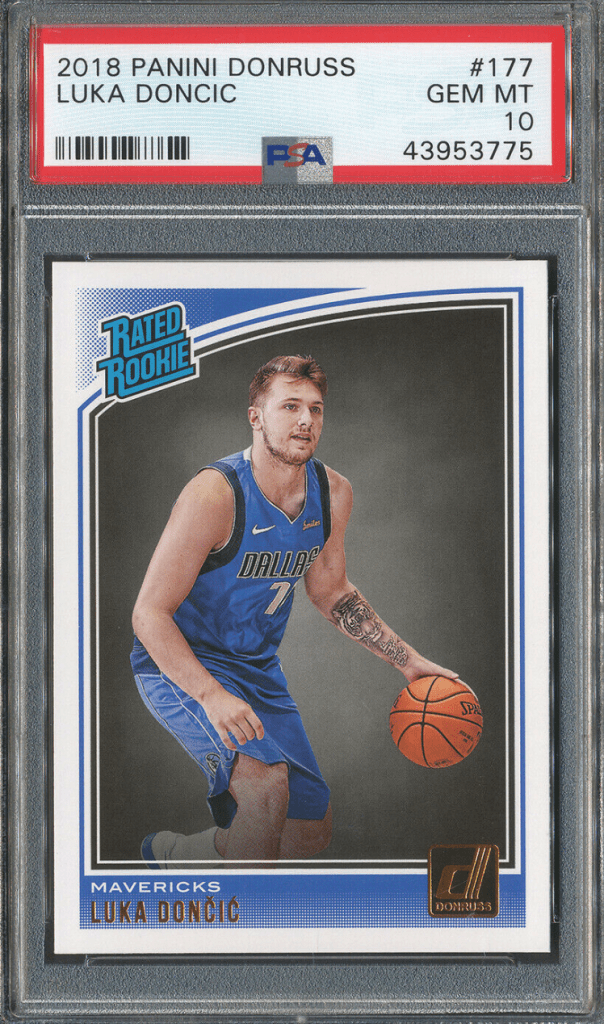 This card is super sharp and we personally like how you can get a great view of his tattoo on his left forearm.

The back of this Luka Doncic rookie card reads “For some time, NBA scouts have gushed over a budding sensation on the European basketball circuit. In 2018, that sensation, Doncic, made his way to North America and joined the Mavericks. In Dallas, the guard will instantly become a fan favorite as he is tasked with turning a rebuilding franchise back into a contender.”

As you may have already gathered GoldCardAuctions are extremely high on Luka Doncic and have purchased a number of his high-end cards for our portfolio.

Not only do we think that Luka will lay claim to multiple MVP awards over his career but feel he can also bring Dallas an NBA championship or two.

We feel Luka Doncic will be able to hold court with Mike Trout in the sports card investment world in the near future.