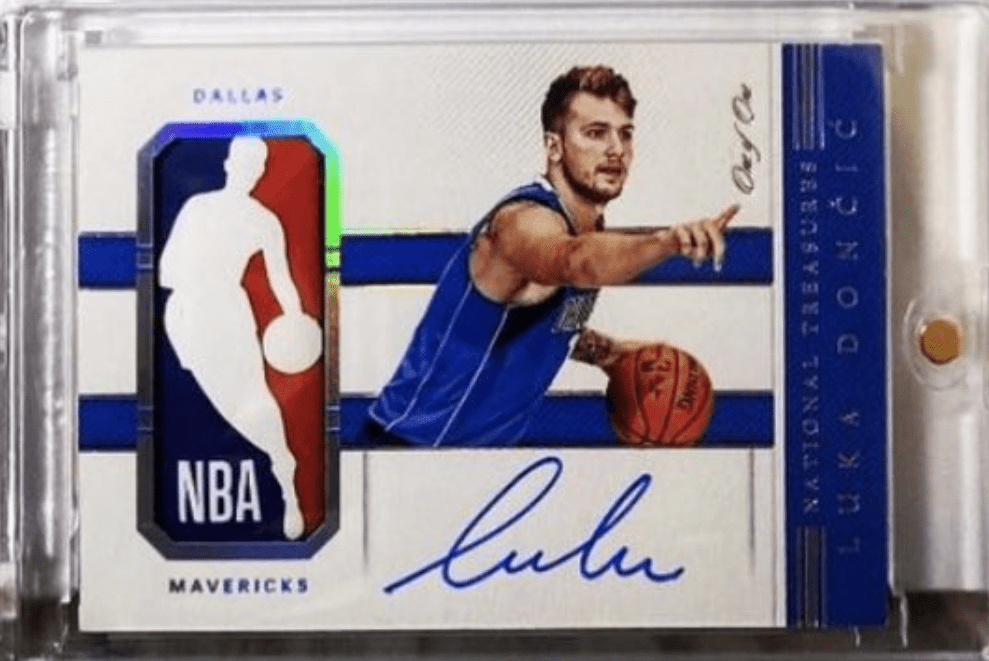 The tremendous growth of sports cards continues as the value of a Luka Doncic rookie card reaches new heights.

Contents hide
How Much is a Luka Doncic Rookie Card Worth?
How Long Did Luka Doncic Play for Real Madrid?
What Did Luka Average his Rookie Year?
How Much Money Does Luka Doncic Make a Year?
Are Luka Doncic Cards a Good Investment?

How Much is a Luka Doncic Rookie Card Worth?

History was made on February 28th, when Luka Doncic’s rookie card from 2018-19 Panini National Treasures sold for a breathtaking $4.6 million.

Luka’s rookie card from Panini National Treasures became the 2nd most valuable card in sports history, just behind a 1952 Topps Mickey Mantle card that sold for $5.2 million back in January.

2018-19 Panini National Treasures was released on April 26, 2019, a 158 card set containing 10 cards per pack. Each pack included eight autographed or relic cards, with one base or parallel card along with a printing plate for good measure.

The unparalleled card is limited to one-of-one that is autographed in blue ink by the Dallas Mavericks superstar. The rookie card also features the Logoman patch, which indicates the card possesses Luka Doncic’s game-used jersey. As a rule of thumb, Logoman cards are ordinarily the rarest and most sought-after basketball cards.

How Long Did Luka Doncic Play for Real Madrid?

Luka Doncic hasn’t had a conventional path to NBA stardom. Luka began his career playing for the Real Madrid youth team at the age of 13. He played for Real Madrid for six years while emerging as the EuroLeague’s best player in the process.

In 2017-2018, Luka earned the EuroLeague’s MVP award, which is Europe’s highest level of basketball, and the MVP award in the Liga ACB, the most prominent professional basketball league in Spain. Over 216 games with Real Madrid, Luka led his team to seven titles and was elected to the EuroLeague 2010-2020 All-Decade Team.

What Did Luka Average his Rookie Year?

In Luka’s rookie season, he averaged 21.1 PPG, 7.8 RPG, and 6 AST while shooting 42% from the floor and 32% beyond the arc. While racking up eight triple-doubles for the season, Luka Doncic became just the 5th NBA rookie to average at least 20 points, 5 rebounds, and 5 assists, leading to capturing the NBA Rookie of the Year Award.

Now in his 3rd NBA season, Luka continues to approach averaging a triple-double on a per-game basis. Through the halfway point in the 2020-21 season, Luka is averaging 28.6 PPG, 8.4 RPG, and 9 AST while raising his two-point field goal efficiency to 47%.

How Much Money Does Luka Doncic Make a Year?

At 22 years old, the 6’7″ NBA sensation from Slovenia is only just establishing his dominance.

“In his 3rd NBA season, the term Hall of Fame has been tossed around in conversation when discussing Luka Doncic”

Luka has the skill-set, intangibles, and basketball IQ to remain one of the most elite basketball players in recent history. With this in mind, it stands to reason that Luka’s 2018-19 Panini National Treasures card is the 2nd most valuable card in the history of sports.