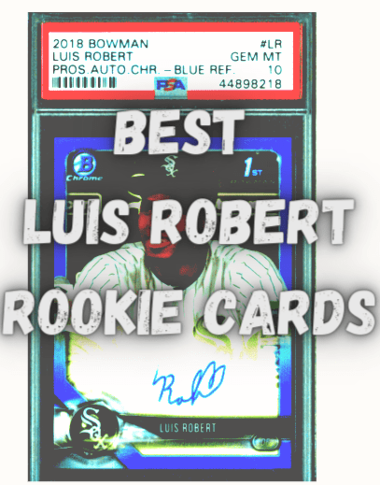 Luis Robert has been compared to Ken Griffey Jr. by his minor league coach and as much as we hate to make comparisons, we 100% agree (although he won’t be quite that good).

Luis Robert has the raw skill needed to be a superstar and his baseball talent simply can’t be contained by the minor leagues any longer.

His promotion to AAA this year has him slashing .338/.403/.662 and hitting 5 balls out of the park in his first 16 games. You can’t ask of a prospect more than what Luis Robert has delivered: total domination at every minor league level.

His impressive stats parallel his meteoric rise in the rankings. Before the 2019 season, Robert was the 40th ranked prospect in baseball. Now, he’s 5th overall and the 2nd ranked outfielder.

UPDATE October 2020: Just as we predicted Luis Robert had a awesome rookie season in 2020 and finished runner-up in the AL Rookie of the Year.

So, his talent is clear. That’s a huge contributor to making his cards a solid investment. But it’s not the only factor in his favor. He’s also in a major media market (i.e. Chicago). This will help his long-term exposure and put a much higher ceiling on his popularity.

Without further ado lets check out the best Luis Roberty rookie cards to invest in now! 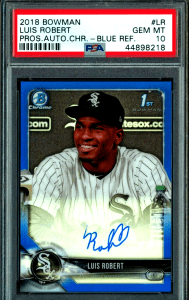 This is one of the best looking non-action rookie cards since the classic 1989 Ken Griffey Jr. Upper Deck. There are a variety of parallels, including a sick looking blue refractor (shown above).

The card shows Roberts at a press conference after signing for big-league money with the Chicago Whites… he looks thrilled, as he should. That smile says it all. It’s the smile of a man who knows how bright his future truly is. 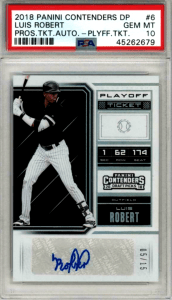 A super high-end Luis Robert rookie card that comes with a sweet autograph.

Numbered #6 the card shows Luis at the plate looking to take the ball to the moon and back.

A great sportscard investment for collectors with larger bankrolls. 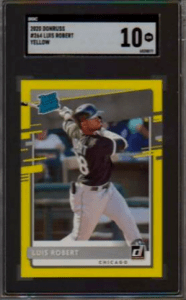 We’re starting to like these rare Dollar Tree Rated Rookie cards more and more… they somewhat remind us of those Mike Trout Walmart Rookie Cards back in 2011. We really like the yellow border on these bad boys.

The 2020 Luis Robert Dollar General Donruss Rated Rookie baseball card is numbered #264 and shows him smashing the hell out of the ball out of the state.

The reverse reads “To say Robert enjoyed a breakout campaign season in 2019 would be an understatement. After not hitting a home run in 2018, the highly touted Cuban prospect smashed an incredible 32 long balls in 122 games across 3 levels. That power went with 36 stolen bases and a robust .328 average, cementing his status as Chicago’s top prospect”.

To say this card is underrated/undervalued is an understatement! We sent ours in to get graded with PSA. And yes it has been months and we are still waiting for the results. 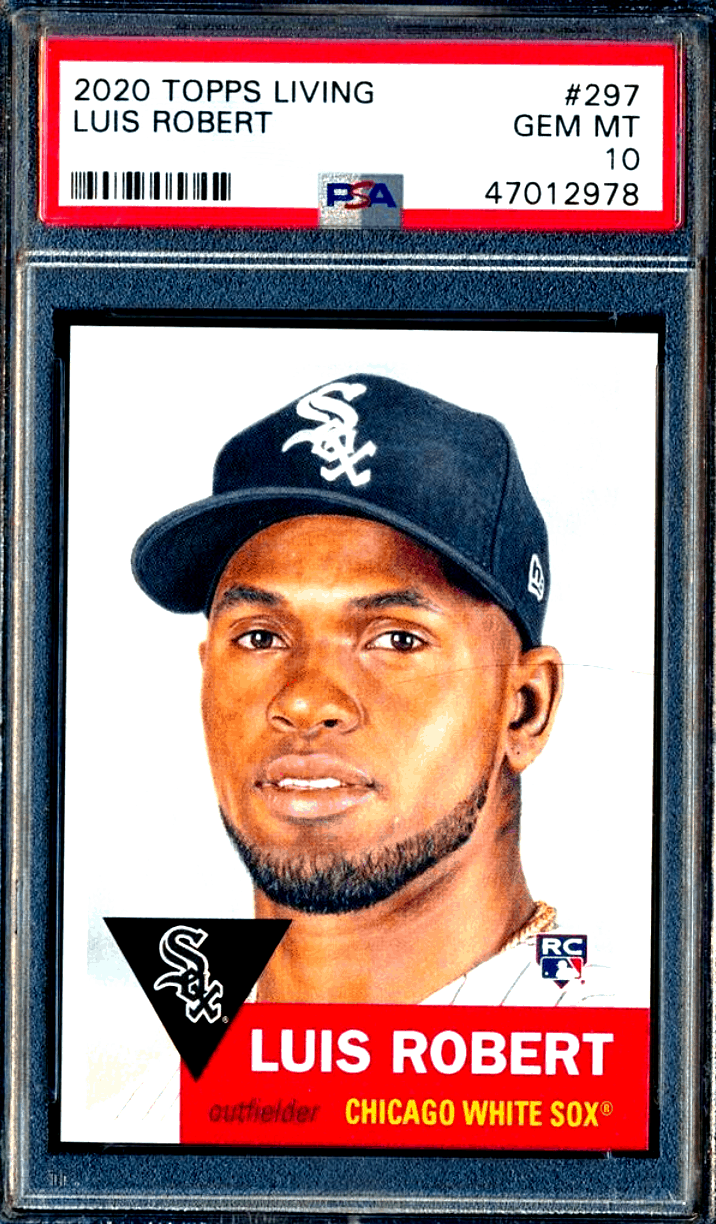 A good-looking card with a fair price point.

You either hate or love the 2020 Topps Living Set as we had not heard much in between the two options… we personally love them (which is funny because at first, we hated them).

Numbered #123 the card shows a big ol’ headshot of Robert with a look that says I will destroy you. Watch out AL pitching he is coming in hot. 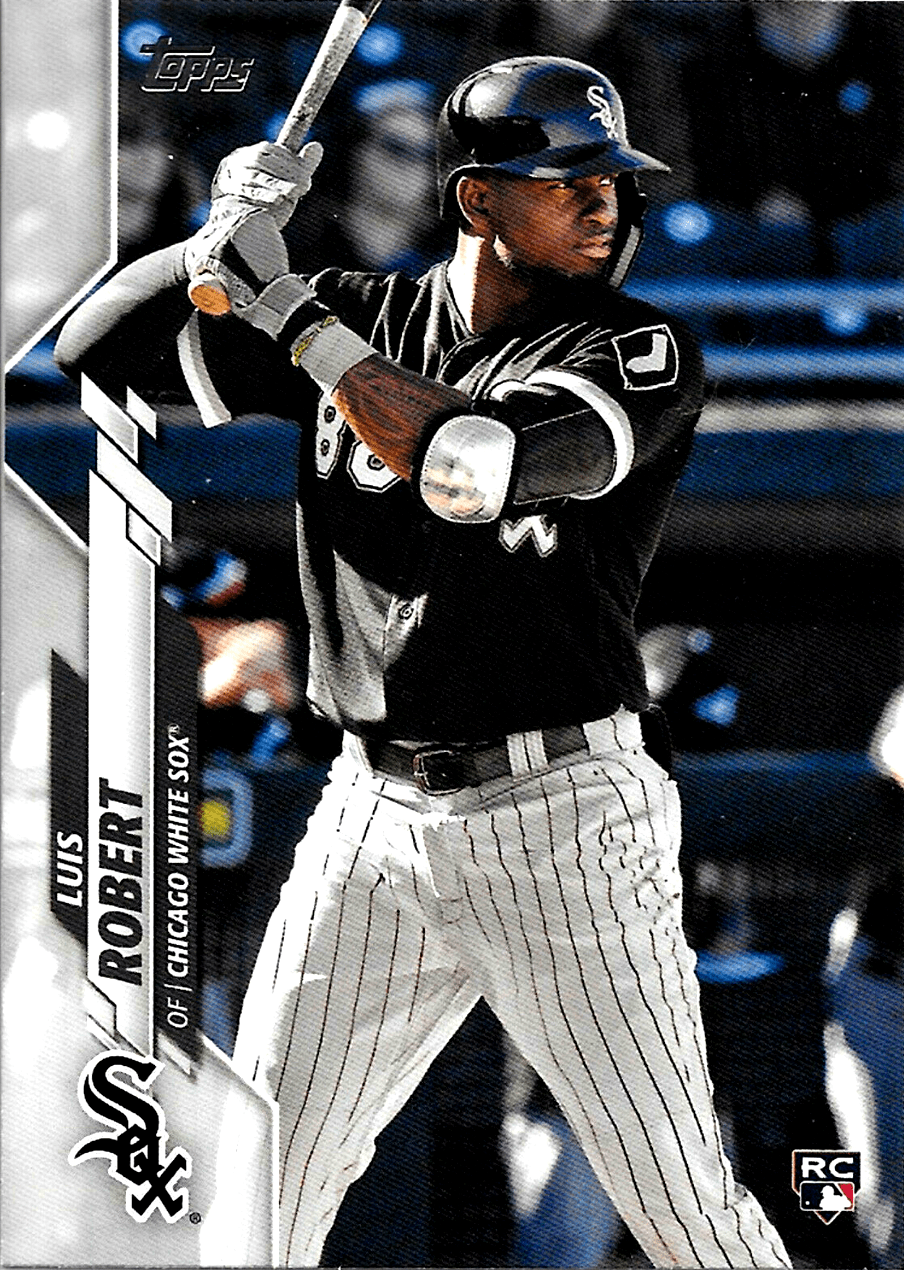 Here are the true Topps Rookie Cards for Luis Robert and collectors are gobbling them up just as fast as they land on eBay… we have yet to see a PSA or BGS graded card for auction but are checking daily.

The card is numbered #392 and is available in a few high-end parallels. This card is probably our 2nd in line after the Dollar Tree RC and tied with the Bowman. 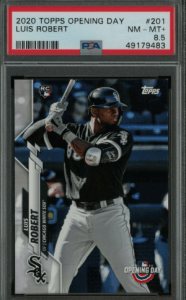 The first Topps Luis Robert rookie card featuring Luis at the plate with a look on his face that seems to be telling the minor league pitcher this ball is going out of the park and there’s nothing you can do about it.

Numbered #201 the reverse reads “Omar Vizquel, who managed Roberts at Double-A, compares the five-tool phenom to a young Ken Griffey Jr. He can do it all Vizqual applauds. He can beat you with a home run, a stolen base, turn it into a different gear and make a play in the outfield. In 2019, Robert dominated three levels of the minors to win the USA Today’s Minor League Player of the Year award“. 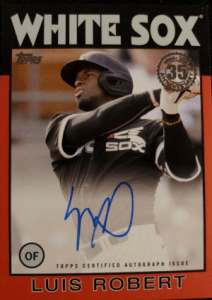 The 1986 Topps Set was one of the best baseball sets of all-time. Add Luis Robert’s autograph, an orange border, and you have one of the best-looking baseball cards on the planet.

If you can manage to get your hands on one of these, be sure to get it graded by PSA as it will jump in value substantially as almost none PSA graded exists. 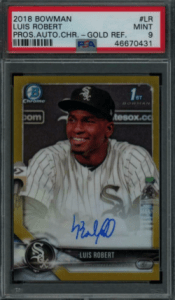 Luis Robert rookie card values are set to have a super bright future.

To obtain an estimate of any of his rookie cards please email us a photo of the card (front and back) to value@goldcardauctions.com.

Email advice@goldcardauctions.com if you would like help in regards to buying a Luis Robert baseball card or DM us on the Gold Card Auctions Facebook Page.

You can also reach out to us via the Gold Card Auctions Contact Page. 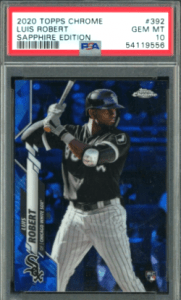 It looking more and more like this kid is the real deal and he is big-league ready. He has nothing more to prove in the minors and we are betting the farm he is going to be an absolute beast in the MLB.

A Ken Griffey Jr. comparison is a nice prediction but what we also like is the fact that he was named the USA Today Minor League Player of the Year… if you take a look at some of the winners of this award, it has a pretty good track record (previous 5 winners include Vladimir Guerrero Jr., Ronald Acuna Jr., Alex Bregman, Blake Snell, and Kris Bryant).

How much is a Luis Robert rookie card worth?

A Luis Robert rookie card can be worth a few hundred or a few thousand depending on the card and grade. Email us at value@goldcardauctions.com for an estimated card worth. Include 2 photos.

What are the best Luis Robert rookie cards?

Which rookie cards are most valuable? 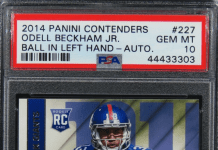 Leave a Reply to Gregory A Watters Cancel reply