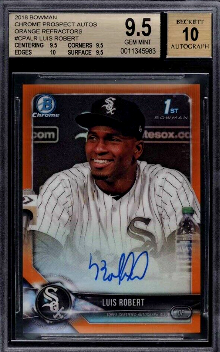 With center fielder Luis Robert, third baseman Yoán Moncada, first baseman José Abreu and catcher Yasmani Grandal, the Chicago White Sox are very well-represented by Cuba on their roster. It’s not just the current team either, as the White Sox have found success with Cuban players for decades on end already.

A FiveThirtyEight.com study found that the Sox had the most wins above replacement (WAR) per 162 games generated by Cuban-born players for MLB teams in a single season, 1901-2020. The margin was distant, too, as the Sox had a Cuban-born WAR of 20.2, with the Minnesota Twins second, at 14.6. Abreu, the reigning American League MVP and three-time All-Star, is the present among Cubans on the White Sox; Luis Robert is the future.

A 2019 MLB Futures All-Star, Robert was handed a $50 million contract before he ever played an inning of Major League Baseball. He started paying off dividends immediately, winning a Gold Glove Award in his very first MLB season (2020). And while the Sox postseason ended in disaster, with a 3-1 (and -13 run differential) American League Division Series defeat to the Houston Astros.

You can’t blame Robert, though, as he led the Sox in batting average (.500), on-base percentage (.600), and runs (4) in the ALDS. You probably should be buying Luis Robert’s player stock right now, but what about his signed baseball cards? Let’s take a close inspection via examining the best three autographed issues available on the market right now.

A great second-place option from Topps.  Available in a generous amount of parallels. 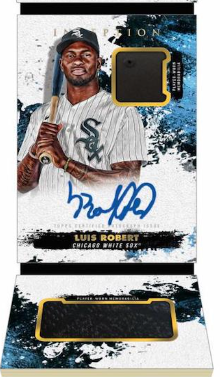 We start at the top with a scarce and expensive issue, a stunning card. What makes this card stand out more- its scarcity or its layout/design. Yes, it is a miniature book! It has two “pages,” and each side is ultra-premium.

It’s more than a card, it’s a transcendent work of art, and the marble background reflects that. The background pattern evokes what you would see as a top-tier art museum’s floor and/or walls.

This is another unique issue, modeled after a 1951 set designed to be more playing than a trading card. It’s a throwback to an era when people looked at (and treated) baseball cards in a manner that is very different from today.

The autograph appears in the lower-left corner, but it does not draw attention away from the focal point, the artist’s rendition of Robert’s profile. Overall it’s not exactly the most aesthetically pleasing card, as it’s strange and overall cluttered or busy. The same can be said of the back, but this is what cards looked like back then. It is a unique one; I will give it that.

This is much more of a classic, straightforward kind of issue, the kind of card you might find during the junk wax era, but this is a nicer, cleaner, crisper version. And, of course, this card is the opposite of those from the junk era in terms of scarcity.

It’s an exceptional rookie card with a sleek design and a foreground image that genuinely makes the card pop. Robert’s pose evokes a solid level of confidence in the kind of player he was about to/will become. The color scheme works very well, and the bright blue complements and supplements the black and white. It’s got just enough when it comes to frills, not too many, not too little.

It’s certainly rare to find a card quite like this, one that features two of the many White Sox 5-tool stars in developed. It’s autographed by both of these young, promising position players, with the perfectly apt term “spark of light” emblazoned on the front. This eye-catching issue does a perfect job of centering and balancing both the visual stimuli and the multitude of imagery.

Its presentation is also symbolic of the baseball renaissance on the south side of Chicago right now. The golden border here complements the golden inked autographs exceptionally well, and it’s a hue that works very nicely with the black.

This Luminaries issue is a rare find and a gem of a card. If you’re trying to collect both players, then this specific short print should be at the top of your list. Yes, this card costs pretty petty, no doubt about it, but it’s worth it due to the aesthetic quality, scarcity, and distinctiveness.

So how do these four cards rate when it comes to returning on investment capability and potential? That depends on how much you believe Robert will develop and how quickly that learning curve will be. It looks like he’s going to live up to expectations. In the quasi-season or exhibition season that was 2020, the Sox finally ended their postseason drought. In this season, they were much more legit, as they ended their division title drought.

However, both postseasons were huge disappointments, as the Sox bowed out in the first round. Manager Tony LaRussa is under the microscope, and he’s a very polarizing figure. Is the old school guy the right one to lead this team of young stars in the making? If he can’t fully relate, how much does that matter?

Given how talented their roster is and how weak the division is, the Sox should dominate the AL Central for the next couple/few years, and that means more postseason appearances are coming. If Robert steps up and becomes an October hero, over and over again, then his autographed cards should soar in value.

Maybe now might be the time to get in on the ground floor?