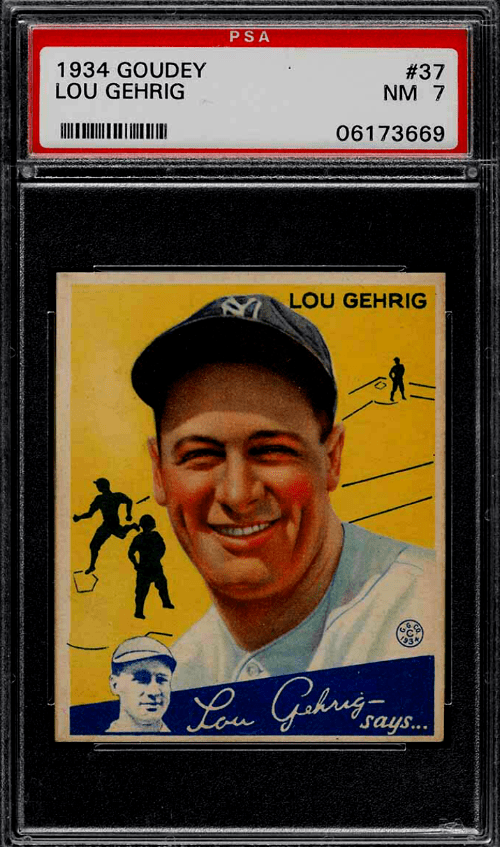 Lou Gehrig (1903-41) spent his entire career with the New York Yankees, winning everything imaginable during his 17 seasons with the franchise. A six-time World Series Champion with seven All-Star appearances, he’s arguably better known for the disease that caused his early retirement in 1939, and eventually his death.

The incurable neuromuscular illness is now commonly referred to as “Lou Gehrig’s disease“, although he’s still beloved by any serious Yankees fan.

Here’s a rundown with the top five Lou Gehrig cards to be on the lookout for, along with investment advice for the next few years.

Given his sudden passing, there’s an obvious lack of signed cards from later years, and earlier editions do tend to get the majority of the attention.

Options from the 1930’s feature heavily, so we’ll start with one of the best Gherig cards ever to be produced. 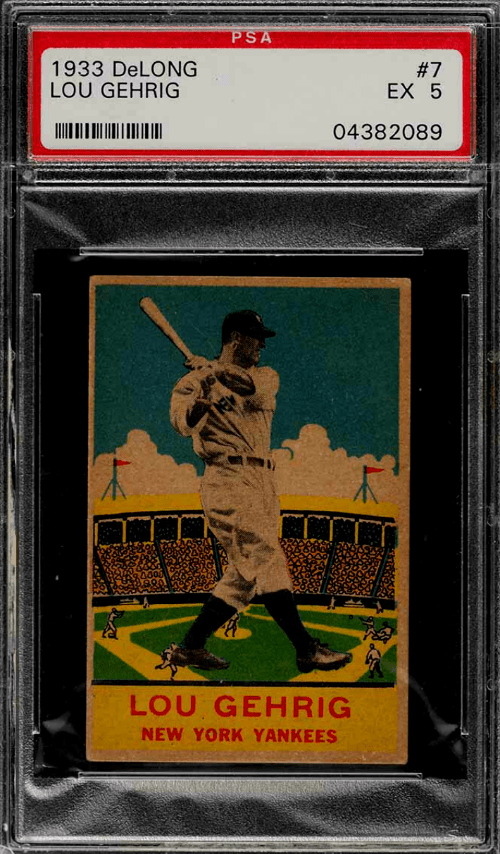 We’ll begin with a card that is immensely valuable, for a number of reasons. The Delong set was the only one ever to be issued by the company, and they’re seen as some of the rarest from the decade.

It features a black-and-white die-cut image of Gehrig set against an illustrated stadium backdrop, with a bright blue background. His name and team are listed in red letters on a yellow segment at the bottom. Given the age, it’s no surprise to find that it’s prone to a range of condition-based issues, such as problems relating to toning and centering. 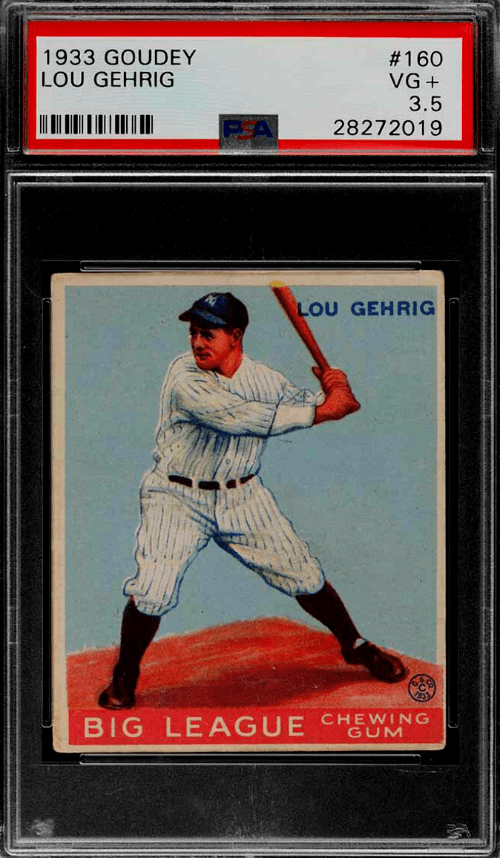 The 1933 Goudey set has two Gehrig cards, numbered #92 and #160 respectively. They’re both seen as his RC for many collectors, and they have the same design on the front.

There’s an illustration of Gehrig with a bat held aloft, along with a pale blue background and a rough red shape for the floor. His name is found at the top, and there’s a ‘Big League Chewing Gum’ logo found at the bottom. The second card in the set is more expensive, although both are worth a fair amount when looking at higher PSA grades.

Goudey also released a couple of Gehrig cards in ‘34, centering the set around the Yankees legend. They added featured comments from the star for other selected players in the set, and a small image of Gehrig is also found at the bottom of some of the cards.

The first one we’re looking at is #37. The sharp yellow background immediately catches the eye, and it’s easy to see how it’s seen as the better of the two 1934 options. There’s a large profile shot of a grinning Gehrig, along with a tab at the bottom called ‘Lou Gehrig says…’ as he leaves a comment about himself on the reverse. 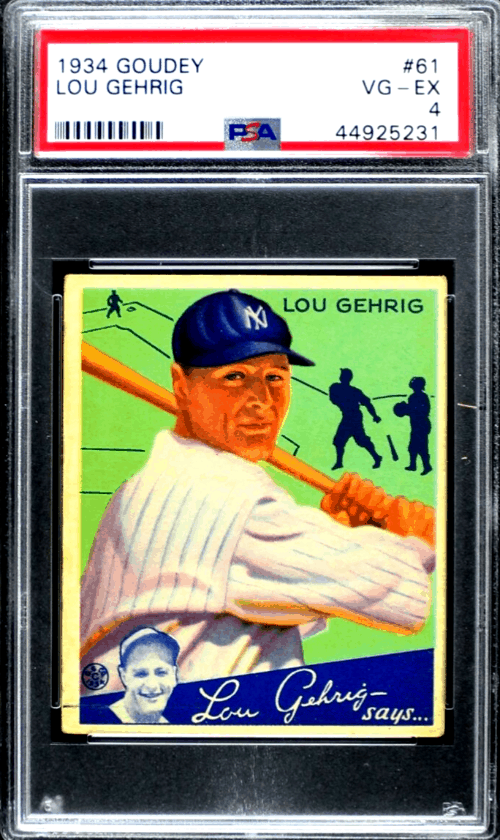 Next up from the 1934 Goudey set is the #61 card. The darker background is one obvious difference between the two, and it also has a posed shot of Gehrig with a bat held over his shoulder. It has a ‘Lou Gehrig says…’ segment at the bottom, as he left comments for both cards from the set.

Must Read: Best Baseball Cards from 2019

It’s the more affordable option of the two, although it’s still incredibly valuable in its own right. They’re both some of the more popular Gehrig options you’ll find overall, and they offer a massive aesthetic improvement compared to the 1933 editions. 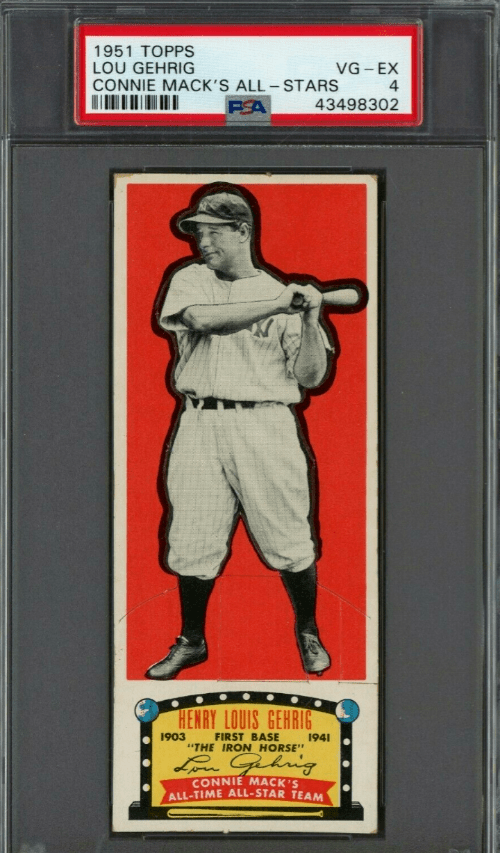 The final card on the list takes us out of the 1930s, to one of Topps’ first-ever releases in ‘51. This card is part of a team selected by Hall of Fame manager Connie Mack, as he picked out the best All-Stars to have ever played the game.

An iconic black-and-white die-cut Gehrig image takes up most of this elongated card, with a deep red background that makes it difficult to find in good condition. A further segment is found below, noting his position, name, and signature.

The Topps branding and the strong design make it one of the better options, especially if you’re looking for an investment piece that doesn’t date back to before WW2. 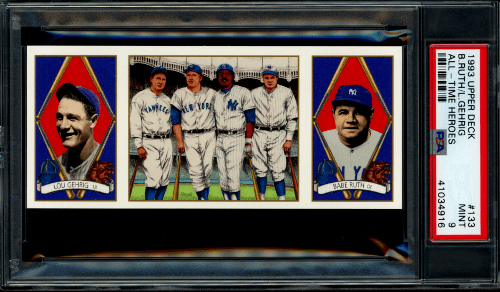 If you have a Lou Gehrig baseball card and would like an estimated value please email us at value@goldcardauctions.com.

‘The Iron Horse’ of baseball, Gehrig is now remembered for more than his time with the Yankees. Nonetheless, his record of 2,130 consecutive games lasted for 56 years until Cal Ripken Jr. came along, and he could have kept it up for longer still, had ALS not ripped him away from the sport when he still had so much left to give.

The story makes his earlier cards more valuable, while he’s still seen as one of the best players of his era, along with legends like Babe Ruth.

In terms of investment pieces, even the most worn versions of the 1930’s cards are worth low four-figure fees, while anything in better condition is worth a substantial amount. They just weren’t made to last, and many were flawed, to begin within some way or another.

His top cards continue to slowly creep up in price each year, helped by a real lack of options that have managed to achieve a high grade. There’s no reason why they shouldn’t continue to maintain their steady rise, although they’re probably best seen as a long-term investment piece, to be held onto for as long as possible.