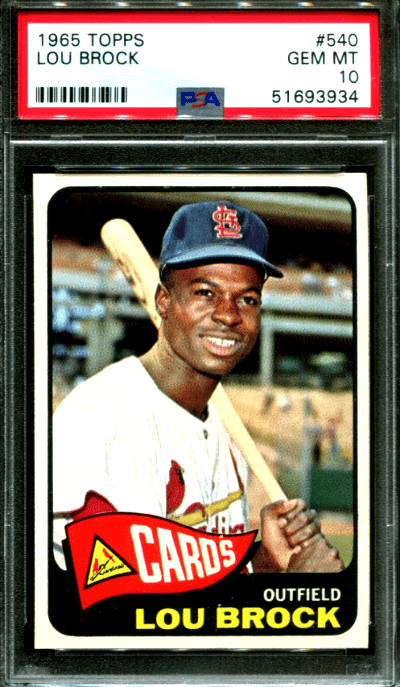 Lou Brock (1939-2020) held the career record and single-season record for stolen bases after a 19-year MLB career in which he’s remembered for being a six-time All-Star and a two-time World Series winner. He passed away in September 2020.

Must Read: Best Sports Cards To Invest In Now

Here’s a rundown with the best Lou Brock cards, including a more recent signed option if you’re looking for something a little different.

There’s only one Brock RC, which can be found in the 1962 Topps set. It’s a winner in terms of values and rarity, but what else manages to make the list? 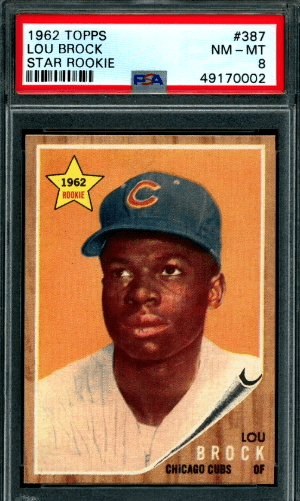 The one and only Lou Brock rookie card is part of the 1962 Topps set. Framed with a brown border and a wood effect, the Star Rookie features a great profile shot of the player in a Cubs cap. There’s a ‘1962 Rookie’ logo in the top left corner, while it has a deep orange background.

The wood grain continues up to the border, making it extremely difficult to find high-rated PSA copies of the card. They can differ in color, and the set also has issues with centering and print defects. There are only two PSA 10 grades in the registry, with the last recorded sale back in 2012.

Released a few years later, the 1965 Topps Brock card is another great early option. It features a bright posed shot of the player in a Cardinals jersey, with a smile on his face and a bat held over his shoulder.

Educational: How To Get Your Cards Graded By PSA

Once again, gem mint grades are limited to fewer than 10 copies, so it’s exceptionally rare. 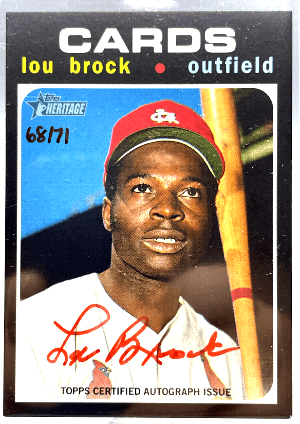 2020 Real One Dual Autograph is another great price of Brock merch. As a dual auto, he shares the card with esteemed Cardinals pitcher Bob Gibson.

Gibson played 17 seasons for the St. Louis Cardinals as a pitcher and was a nine-time All-Star and two-time World Series winner during that period.

Containing signatures from two stars who recently passed away, it’s also numbered to just 25 copies, written by hand on the front. The two Cardinals players are pictured side by side, and it’s a must-have for any die-hard fans. 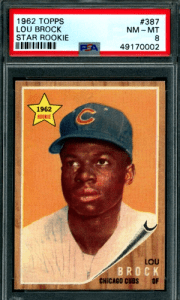 Looking for an estimated value or buying advice in regards to a Lou Brock baseball card? Please visit the Gold Card Auctions Contact Page or DM us on our Facebook page to learn how.

Interested in having us write a specific player? Email us at info@goldcardauctions.com and we will get to it ASAP.

Brock passed away in September 2020, and he’s well-remembered as one of the best Cardinals players of all-time. This has led to increased interest in his cards, especially so soon after his death.

With only one RC to choose from, Brock’s 1962 Topps card is definitely a great investment piece. The design of the set itself has led to increased scarcity, while it’s nearly 60 years old. There’s a distinct lack of gem mint copies, so it’ll be difficult to add a perfect version to your personal collection.

“There’s a lack of options and parallels, but a number of interesting early Brock cards are still worth decent money in the present day.”

Any of his early 1960’s cards are fairly valuable, even if they can’t match up to his RC when all is said and done. 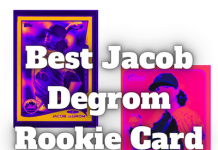 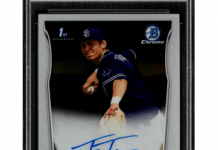