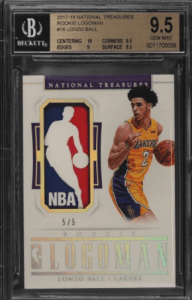 New Orleans Pelicans point guard Lonzo Ball has been one of the most popular rookies of the NBA’s Class of 2017. Thanks to his father, LaVar Ball, Lonzo has made his share of headlines in recent memory (particularly the BBB controversy).

Ball first started playing basketball when he was just two years old. He and his brothers, LiAngelo and LaMelo, played on teams which LaVar coached.

Lonzo Ball had a stellar high school basketball career at Chino Hills High School. He averaged 23.9 points, 11.3 rebounds, and 11.7 assists and guided the Huskies to an undefeated 35-0 record and a state title. Ball won a slew of awards in the process, including Naismith Prep Player of the Year.

Ball suited up for the UCLA Bruins in college. During the 2016-17 NCAA season, he averaged 14.6 points, 7.6 assists, and 6.0 rebounds. He helped the Bruins reach the Sweet 16 that year. Ball was a unanimous first-team All-American.

The Los Angeles Lakers made Ball the second overall pick of the 2017 NBA Draft. Ball was teammates with his basketball idol LeBron James during the 2018-19 NBA season.

Ball was part of an eight-player trade that sent All-Star forward/center Anthony Davis to the Lakers on July 6, 2019. 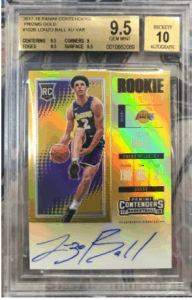 For one, it garnered a Gem Mint rating from BGS. It also has the slickest layout among Lonzo Ball rookie cards. You can see a photo of him putting the ball between his legs on the front.

The rookie ticket, autograph, and purple and gold background mesh seamlessly. If you’re a Los Angeles Lakers fan, this is a card worth your while. It’s eye candy at its finest.

This card isn’t as expensive, but it doesn’t come cheap, either. Nevertheless, it should give you a nice return on your investment.

While this card has no autograph, it has Ball’s game-worn NBA patch from his rookie year. Plus, it comes from a reputable brand (National Treasures). It’s a solid buy in every sense of the word. 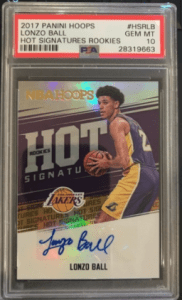 This card will cost you somewhere within the three-digit range. Expect a nice ROI a few years down the line. It’s the best option for the more casual rookie card collector.

You can see a photo of Ball holding a basketball on the front of the card. His signature is scribbled below the Lakers logo.

Lonzo Ball enjoyed some measure of success with the Los Angeles Lakers during his two-year stint in Southern California.

However, he has yet to experience playoff basketball. For their part, the New Orleans Pelicans aren’t titled, contenders. Nonetheless, Ball should become a key contributor in the Big Easy for years to come (watch him lob alley-oop passes to Zion Williamson night in and night out). On that note, it isn’t hard to imagine Ball earning several All-Star nods in the future.

Lonzo Ball Rookie Card Investment Outlook: GOOD BUY (but wait until after the 2020 season to buy)trong>