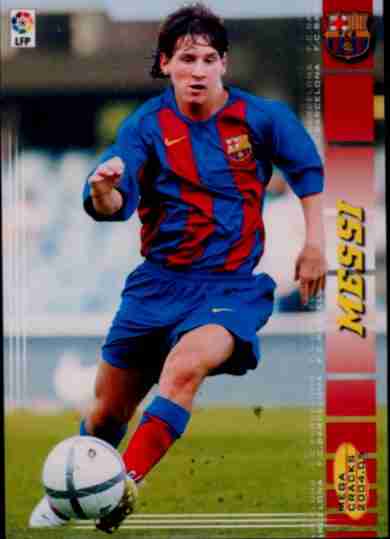 We have been receiving many requests to expand into soccer cards… so what better way to “kick it off” than with the best soccer player on earth! Keep reading to learn which Lionel Messi rookie cards are ideal for your sports card investment portfolio.

The skills of Argentine playmaker Lionel Messi (06/24/87) are legendary, even as he enters his 18th season as the talisman for Barcelona.

Messi is insanely popular worldwide, with 230m social media followers in 2019, or almost double the number of LeBron James (121m).

But what are the best Messi rookie card options, and what’s the outlook for the next few years? Here’s everything you need to know. 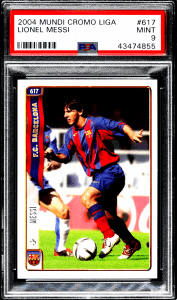 The pick of the bunch when it comes to collectibles featuring the diminutive forward, the 2004 Mundi Cromo Liga Soccer is the perfect rookie Messi option.

The action shot features the player in full motion with the ball at his feet, likely producing a moment of magic against an unsuspecting defender.

As he was playing for Barca B at the time, there’s the added bonus of no sponsor on the kit, and it’s one of the more affordable Mundi Cromo cards overall. 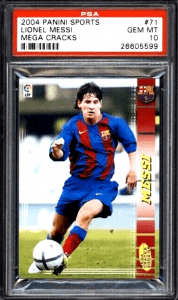 One of the rarest rookie cards on the market, the Mega Cracks features an image of Messi dribbling in an old-school Barca kit.

The card shot up in value in recent years, especially as we get closer to his inevitable retirement.

There’s no signature, but it’s the most popular Messi rookie card for many collectors.

As always, be on the lookout for versions that have earned a high grade. 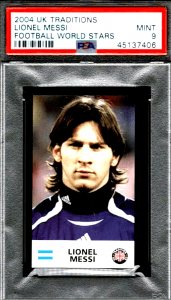 A complete departure from the style of the first two cards, this RC from the UK features a large close-up image of Messi.

There’s no Barca kit to speak of, and it notes his team like Argentina.

If you can get past the lack of club colors, it’s a solid investment option, as well as a reminder of the many dorky haircuts Messi had before settling on something more traditional.

It’s also the most affordable card on our list, so it’s worth checking out.

This sticker is worth a look at for collectors who are looking to invest in something a little different. 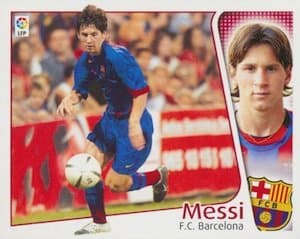 This sticker is quite rare and thus despite not having an autograph or any other unique features it can still command a high price. It shows Messi running with the ball at his feet on the left side of the card, next to a portrait of the man himself on the opposite side.

The Barcelona FC shield is displayed prominently on the bottom right.

As he enters the twilight of his career, the forward still has enough talent to scare any defender in the world. His impact on the game has been astronomical, but time is slowly running out.

After winning the Ballon d’Or for a record-breaking sixth time in 2019, Messi admitted; “I’m aware of how old I am, and I enjoy these moments so much because I know that retirement is approaching. Time flies.“

Must Read: 5 Rookie Cards that could DOUBLE in 2020

In the here and now, almost any piece of Messi memorabilia is coveted by soccer fans, due to the sheer number of admirers he has. His retirement will be felt by fans around the world, while most would probably like to own a piece of history in the form of his RC’s. One question mark remains when he’s compared to former rival Cristiano Ronaldo.

Messi has always struggled on the international stage with Argentina, failing to reproduce the dominant displays that led to success in both La Liga and Europe.

Regardless, his rookie cards are especially expensive compared to most other soccer players, and they’re likely to keep increasing in value as he extends various club and league records in the future.

CTA – You don’t have to be a Barca fan to understand the commercial power Lionel Messi wields. It directly correlates to his time spent as the biggest name in the sport, while the soccer card market continues to grow each year.

If you’re getting started in the hobby, here are some of the best sports cards to buy right now. For more investment tips, here’s a list with five rookie cards that could double in price in 2020.

Let us know what you think of Messi’s rookie cards in the comments section below!