The Edmonton Oilers selected Leon Tim Draisaitl with the third overall pick in the 2014 NHL Draft. He previously played for the Prince Albert Raiders and Kelowna Rockets of the Western Hockey League (WHL). 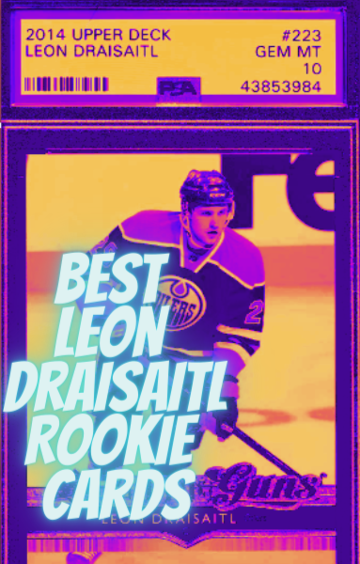 Leon Draisaitl has emerged as one of the elite goalscorers and offensive facilitators in the game. He’s earned the monicker “German Gretzky” as a consequence.

As one of the true offensive stars in hockey, you may want to scrounge up these cards while you can afford them.

O-Pee-Chee has managed to remain true to its original card layout while adding modern touches. The 2014 Leon Draisaitl O-Pee-Chee Platinum Auto RC #RA-5 is evidence of this.

The card’s interior features an image of Draisaitl in his white, blue, and orange Edmonton Oilers sweater. He commands the stick in his right hand and his eyes show intense focus as his skates maintain perfect symmetry.

A thin purple border morphs into a nameplate atop Draisaitl’s image. A black and gold “O-Pee-Chee” logo and circular “RC” emblem stand alongside the nameplate.

The bottom-left portion of the purple border conforms to around Edmonton Oilers logo. The card’s bottom border reads “Oilers” in bold, capitalized letters.

A variety of parallels, including Rainbow, Black Ice, Blue Cubes, and Green Frame, alternate the color of the outer border. Rare parallels will fetch more than the base card.

Draisaitl strikes a stoic pose that is extremely rare for sports cards. He stands, head down and torso straight, resting his open right glove on the butt of his hockey stick.

The lighting and pale grey-black background give the image a cinematic vibe. The perforated Canvas adds to the sense that this one is truly an art piece.

The card’s only significant features are the gold Young Guns banner down low, designed as a two-font, bold-and-cursive duo. A black stripe beneath reads “UD Canvas”, and Draisaitl’s name is printed in mini font beneath that stripe.

This is, without a doubt, one of the most unique, best-looking Draisaitl rookie cards. Prices are strong but remain affordable for this Upper Deck gem.

A Bleach-white background commands respect. The white in Draisaitl’s Edmonton jersey melds with the white backdrop, while the uniform’s blue segments match the card’s series of geometric patterns.

The bottom of Draisaitl’s jersey fades into a white autograph canvas. His blue whirlwind of a signature reads “D29”.

Beneath the autograph is a hexagonal, silver-lined shape which reads “Future Watch”. Barely noticeable on the card’s bottom border is a nameplate.

The bottom-righthand corner is reserved for a circular Edmonton Oilers logo. It’s a timeless design that doesn’t take too many risks. When you have a Draisaitl autograph to fall back on, there’s no need to be bold.

A more affordable option for Draisaitl collectors, the 2014 Fleer Ultra RC #204 has a simple but memorable design.

The image of the German Gretzky is particularly compelling. He’s engaged in a leftward lean, handling the puck in a backhanded manner, chin tucked into the orange of his Oilers sweater.

Behind Draisaitl’s image is a computer code-like series of text reading “Medallion” in a repetitive, box formation.

This is one of those cards that is almost certain to age gracefully, as it would fit just as well in the early 90s collecting landscape as it does in today. You can get it for a comparatively cheap price.

Mark my words: you will rarely if ever find a list of top hockey rookie cards without the words “Young Guns” on it. It’s a testament to the respect that this set commands.

The image of Draisaitl isn’t particularly exciting. The German centerman lurks with a stick hovering over the ice, emanating a threat of offensive genius that hockey fans know well.

The blue-and-orange Oilers kit is always an eye-catching feature. Atop his calf pads is the Young Guns logo. The embossed, diamond-refractive YG banner sits atop a black-and-white Leon Draisaitl nameplate.

An ice-blue stripe serves as the card’s bottom border. Is it sexy? Nah. But it’s a Young Guns rookie card, which means that you can take this to the safe deposit box and just let it sit.

The most valuable Leon Draisaitl rookie card is his 2014 The Cup Exquisite Collection RPA /29 RC.

Leon Draisaitl has proven his league-leading points potential, MVP-caliber talent, and superstar status. For seasoned collectors, these things all sound like money.

There are a variety of Draisaitl rookie cards that offer the chance for appreciation. Many of them can be had at extremely reasonable prices.

If you’re going to speculate on a young hockey player’s batch of rookie cards, you can do far worse than Leon Draisaitl.

While names like Crosby and Ovechkin have higher price floors, Draisaitl may offer greater potential for value.