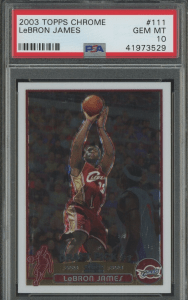 LeBron James is not only today’s most popular NBA player but arguably the best in recent basketball history.

In terms of legacy, James gives the likes of Kobe Bryant and Michael Jordan a serious run for their money.

James was born on 12/30/84 in Akron, OH. He began playing basketball in the fifth grade. He attended St. Vincent-St. Mary High School in his hometown.’

James got off to a rousing start in his high school basketball career, averaging 21 points and six rebounds per game for the St. Vincent-St. Mary Fighting Irish. He increased his scoring average every year, topping at 31.6 points per game during his senior season. He also averaged 9.6 rebounds and 4.6 assists. James was one of the most versatile high school players in the nation.

Gatorade National Player of the Year

James also played football for the Fighting Irish. He excelled at the wide receiver position. In fact, some Division I programs (such as Notre Dame) recruited him.

LBJ skipped college to play in the NBA. The Cleveland Cavaliers made him the first overall pick of the 2003 NBA Draft.

James made an immediate impact in his first NBA game. He scored 25 points in a road game against the Sacramento Kings – the most a prep-to-pro player scored in his NBA debut. James went on to win the 2004 NBA Rookie of the Year Award with averages of 20.9 points, 5.5 rebounds, and 5.9 assists per game.

Since then, James has become one of the NBA’s icons. He eventually led the Cavs to their first NBA Finals appearance in 2007. Cleveland lost to the San Antonio Spurs in four games.

James won his first NBA MVP Award at the end of the 2008-09 season, averaging 28.4 points, 7.6 rebounds, and 7.2 assists. He became the first Cleveland Cavaliers player to earn that distinction.

James signed with the Miami Heat as a free agent in 2010. LBJ, Dwyane Wade, and Chris Bosh formed the trio which helped the Heat win back-to-back NBA titles in 2012 and 2013. James won two more MVP plums during that span.

LBJ opted out of his contract with the Heat in June 2014. Less than a month later, he re-signed with the Cavaliers. He formed another formidable trio with Kevin Love and Kyrie Irving. They helped Cleveland win its first NBA title in 2016. The Cavs beat the Golden State Warriors in seven games.

When James became an unrestricted free agent during the 2018 offseason, he signed with the Los Angeles Lakers. He is determined to help the Lakers win their 17th NBA title.

James’ other accolades to date include: 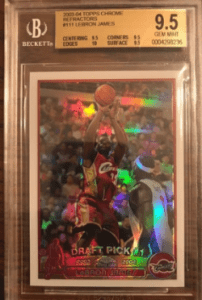 This is one of the more in-demand LBJ rookie cards on the market today and is our pick if you could only own one LeBron rookie card.

The card is numbered #11 and shows him pulling up for a jumper as the Detroit Pistons’ Ben Wallace looks on. The refractor effect makes for some serious eye candy. We daresay this is the best LBJ refractor rookie card around.

The back of the card reads, “No high school hoopster ever has had as many accolades as LeBron, whose quadruple double-type skills could make him a superstar. He won every possible National Player of the Year award in 2002 and ’03.”

Investing in this card will cost you somewhere in the four-digit range. Expect a nice return within the next few years. 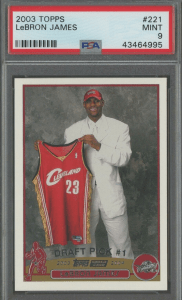 If you can overlook the fact that Lebron is wearing a suit that is 3 times too big for him (what we like to call a parachute suit) then this is a must-have for your collection.

Honestly, besides the Topps Chrome, this is his second most popular rookie card.

The 2003-04 Topps #221 LeBron James Cleveland Cavaliers RC is and will always be one of the most sought after LeBron rookie cards on eBay.

It will age like a fine wine and will only increase in value over the next few decades like a blue-chip stock. 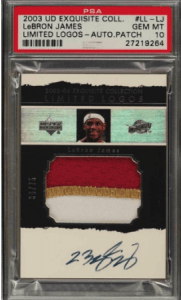 This is the penultimate LeBron James rookie card on the market. Just how exquisite is this LBJ rookie card? You must shell out a hefty sum bordering on the six-digit range.

Yes, it’s a huge investment, but it’s worth every penny. It’s not your typical sports card which highlights the athlete’s photo on the front cover.

Instead, LBJ’s game-worn Cleveland Cavaliers patch during his rookie year takes center stage – it completely overshadows his photo, the Upper Deck logo, and the Cavs logo. LeBron’s autograph – which adds scarcity – is scribbled at the bottom.

The back of the card reads, “Congratulations! You have received a game-used patch trading card personally autographed by LeBron James. On the front of this card is an authentic piece of a patch from a jersey worn by LeBron James in an NBA game. This trading card was sent to Upper Deck directly from LeBron James. This certificate expressly warrants the authenticity of the depicted athlete’s signature.” 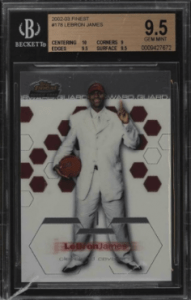 If you want a LeBron James rookie card which captures his dapper image on draft night, this is it. You can see a young LBJ wearing his Cavs draft hat and an all-white ensemble on the front. You can tell he’s stoked to represent his home state of Ohio in the NBA.

The back of the card reads, “Upon choosing James with the first draft pick in 2003, Cleveland Cavaliers chairman Gordon Gund proclaimed, ‘There is no player in the NBA for whom we would have traded this pick.’ That’s an amazing statement, but indicative of the uniquely towering regard in which this teenage marvel is held.”

Many years after LeBron James shook then-commissioner David Stern’s hand, those words proved to be prophetic. 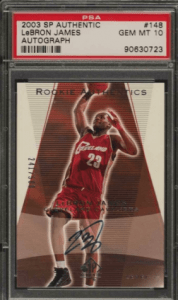 The front of this card combines an image of a young LBJ about to throw the hammer down, background graphics, and his autograph. It all adds up.

The back of the card shows an assurance from Upper Deck LBJ autographed the card personally. It’s authentic in every sense of the word.

As such, it’s a great addition to your LBJ rookie card collection. 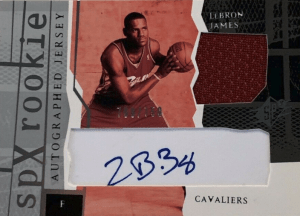 If you want an LBJ rookie card that combines his game-worn patch and autograph, this is it. They mesh well with his photo and graffiti-like graphics on the front. It’s one of the more uniquely-designed LeBron James rookie cards on the market.

The back of the card reads, “James led St. Vincent-St. Mary High School to three Ohio State basketball championships in his four seasons on the team.”

LBJ’s Jambalaya series rookie card has slick graphics – his image, the blue and red background, and gold lettering make this card stand out.

The back of the card reads, “LeBron did not disappoint in 2002-03 as many of his games were on pay-per-view. He always managed to put on a show with a variety of athletic jams. Because of his physical skills and awesome showmanship, he’ll be a dunker extraordinaire.”

This card comes with a four-digit price tag. Still, it’s a good investment. You should get a nice return after a few years.

This is one LeBron James rookie card that has a unique identity – the black background on the front of the card speaks massive volumes. You can also see an image of LBJ making a move to the hoop.

The back of the card reads, “LeBron’s an electrifying performer who can finish with flair. A brilliant passer with amazing court vision, he gains as much satisfaction from a great assist as a monster dunk. Despite intense media coverage, he played with poise and focus as a high school senior.” 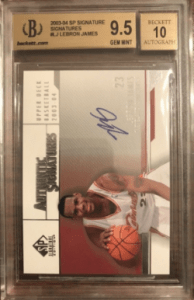 This is another highly-touted LBJ rookie card with his signature scribbled on the front. In terms of graphics and flair, it’s also one of the simpler ones we’ve seen.

The back of the card shows an assurance from Upper Deck regarding the authenticity of the card and the signature.

How much is LeBron James rookie card worth?

The price between cards will vary greatly.

Please email us at info@goldcardauctions.com with a picture of the LeBron card you want a value on.

If we could only pick one? EASY… the 2003-04 Topps Chrome LeBron James Rookie Card would have a lifetime home in our safe deposit box.

LeBron James has won just about every basketball accolade known to man. He has several NBA MVPs, NBA Finals MVPs, and NBA titles tucked under his belt. Love him or hate him, he’s going to be a first-ballot Hall of Famer several years after his retirement.

On that note, only a few players (perhaps Kevin Durant and Stephen Curry) come close to James’ legacy. LBJ is truly a cut above the rest. It’s hard to fathom another player of his caliber dominating the NBA in the future.