[wpdiscuz-feedback id=”decl5xsoje” question=”Where does LeBron rank in the top 10 of all-time?” opened=”0″]Lebron James (12/30/84) is widely considered to be one of the greatest basketball players of all-time[/wpdiscuz-feedback], and his collectibles (i.e. autograph cards, rookie cards) are coveted by anyone with a passing interest in the sport.

Rookie Cards That Could Double In Value

An All-Star from 2005–2021 (and counting), it’s difficult to find enough space to list his individual achievements, while he’d be known as the undisputed GOAT if it wasn’t for someone by the name of Michael Jordan AKA MJ.

Although MJ is still thought of as the best player to ever grace the NBA hardwood LeBron James basketball cards go for just as much and in some cases more than Michael Jordan basketball cards.

James has hundreds of signed options released throughout the years, but which are the top choices overall? Here’s a list with three of his best-autographed cards, which all happen to have been released during his rookie season. 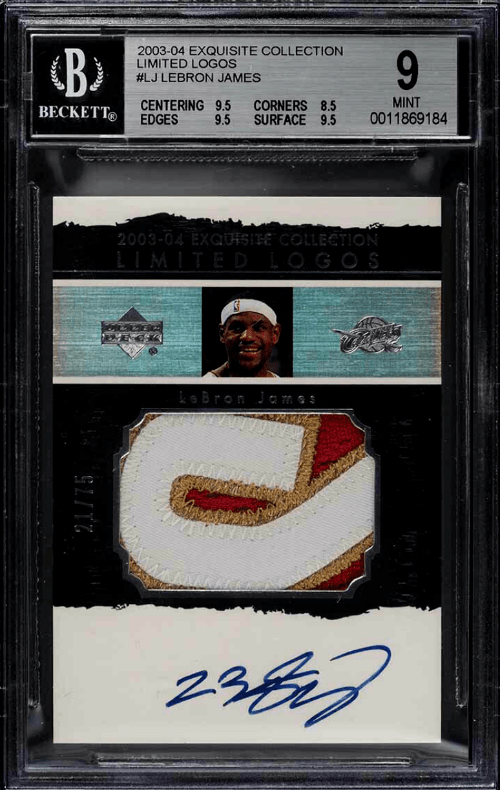 We’ll be looking at the Limited Logos parallel, which features a large game-used patch in the middle of the card, along with an on-card auto-filled using blue ink at the bottom.

It’s serial numbered to just 75, while the design makes it look like it’s been ripped as the black section in the middle meets with the white at the top and the bottom. It also features a tiny profile shot of LeBron, along with a silver UD and Cavs logo. 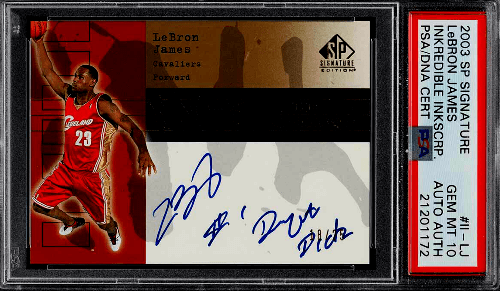 The ‘Inkredible Inscription’ parallel is among the scarcest of all LeBron rookie cards ever to be issued, while it’s seen as one of the more beautiful and colorful brands from that era.

With only 25 copies altogether it’s ultra-rare, while the inscription of “#1 Draft Pick” makes it stand out for many of the other options you’ll find. It’s split into four sections, with the largest devoted to a signature found at the bottom of the card.

The second is a red segment on the left, featuring an image of LeBron soaring through the air for the Cavs. Player info is found in a gold section at the top, while the middle is black with gold trim, noting it’s an ‘Inkredible Inkscriptions’ parallel.

A gem mint copy recently sold for over six figures, making it one of the most valuable pieces of signed LeBron merch on the market. 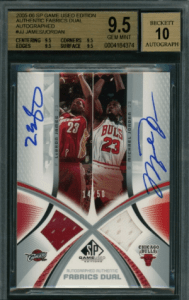 [wpdiscuz-feedback id=”25g8i3urqp” question=”Would you rather have a LeBron James or Michael Jordan Autograph Basketball Card (assuming card value and grade being equal)?” opened=”0″]Why pick just one when you can have both?[/wpdiscuz-feedback]

The 2005 LeBron James/Michael Jordan SP Game Used Edition Autograph basketball card is a super undervalued card and should have a much better than average ROI when compared to other LeBron autos going forward.

Numbered simply #JJ the card shows LeBron on the left, Michael on the right both sporting the number 23 taking a jump shot. Their autos sit to the left and right of the two superstars.

Last, but by no means least, James’ 2003 Ultimate Collection card is another RC with a slick design and an on-card auto found on the front. LeBron is featured as he dribbles with a ball, and the red and white background blends in well with his Cleveland jersey.

The 2003 LeBron James Ultimate Collection autograph basketball card lacks some prestige compared to the Exquisite card mentioned above, but it’s still a great card if you’re looking out for the best-signed options.

With a serial number of 250 (found on the front of the card) it’s the least rare of the cards we’ve mentioned, and that’s reflected in the price when looking at PSA 10 versions. It’ll still set you back by a fair chunk of change thanks to James’ talents. 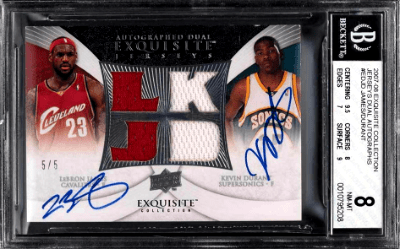 Not on the level as the LeBron/MJ dual auto but this one can hold its own very well.

The 2007 LeBron James Kevin Durant Exquisite Collection Dual Auto basketball card shows of the top 2 players of their generation. LeBron is on the far left while Kevin is placed on the far right.

Numbered #EDJD the card besides the auto also delivers a nice game-used patch from each superstar. 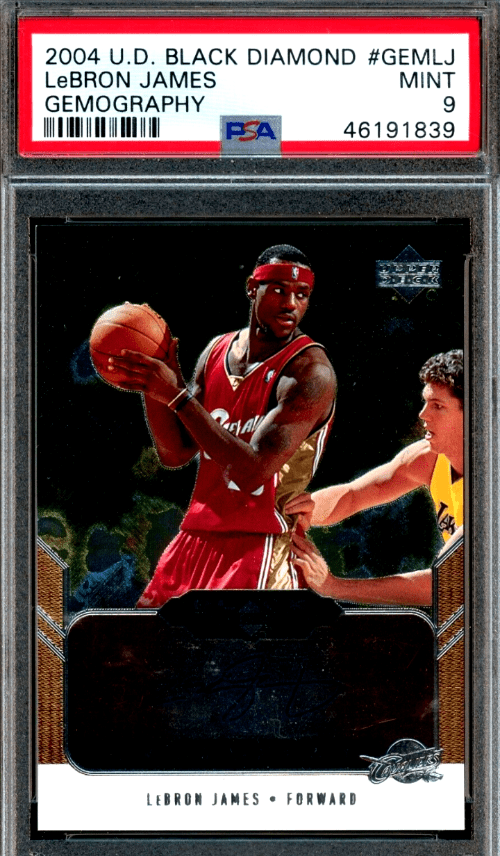 How much is a LeBron James autograph worth? It is impossible to provide a value on these cards due to the way basketball cards are going up nowadays and in particular LeBron Autos/Rookie Cards… in two weeks a card could go up 20% (no joke either).

Post in the comments section below if you would like an estimated amount of your LeBron James auto if it’s graded. If the card is not graded please email us at value@goldcardauctions.com and include at minimum 2 photos.

If your thinking about buying one and want advice please DM us on the Gold Card Auctions Facebook page or email us at advice@goldcardauctions.com. 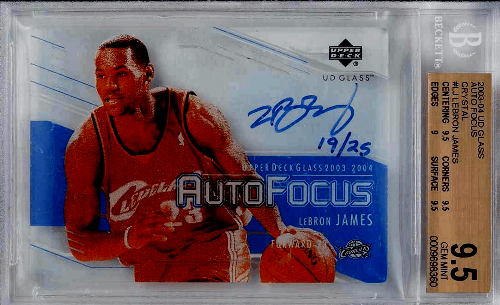 LeBron is always being compared to MJ, so we’ll take the opportunity to do so once more! Jordan cards were always seen as a good investment piece back in the day, and you could even argue that his ‘86 Fleer RC helped to kickstart interest in the hobby again during a lean period.

James’ rookie cards have followed a similar pattern so far, and signed versions are always going to be more popular with collectors who are keen to own a rare, autographed version of his memorabilia.

The two cards at the top can sell for six figures when you’re looking at gem mint copies. As such, the only thing stopping the majority of collectors is the price of entry. This is dictated by the fact that supply far exceeds demand, while there’s an expectation that prices will continue to rise when he retires, and also when James enters the Hall of Fame.

Unlike Jordan, LeBron still has the opportunity to add another NBA Championship or two to his personal trophy cabinet before calling an end to his career, while he was an early candidate for the MVP award before the coronavirus outbreak halted the season unexpectedly in 2020.

If you have a spare six-figure sum lying around, it’s hard to see past PSA 10 graded copies of James’ various autographed options, especially if they’re one of the rarer, serial numbered editions (READ NEXT: Should you get your cards graded).

With that being said, even base versions of his cards have jumped up in price in recent years, making LeBron a dead cert if you’re looking for investment pieces that could potentially be flipped in the short term, or for high ticket items that should be held for a decade or so. Either way, it’s a strong investment option.

How much is LeBron James autograph worth?

A LeBron James autograph basketball card can be worth hundreds of thousands of dollars in particular at high grades. If you would like an estimated value email us at value@goldcardauctions.com.

How can I get LeBron James autograph?

Over are the days of mailing your favorite NBA player and asking for an auto. The best way to get a LeBron James autograph is on eBay auctions or get tickets to the Lakers game and show up early or stay late.

How much is a signed LeBron James rookie card worth?

A signed LeBron James rookie card can be worth millions depending on the card. Please email Gold Card Auctions at value@goldcardauctions.com to get an estimated value of your LeBron auto.

What is the most expensive LeBron James card?

The most expensive LeBron James card sold to date is the 2003-04 Upper Deck auto rookie card which sold for $1.845 million at Goldin Auctions.